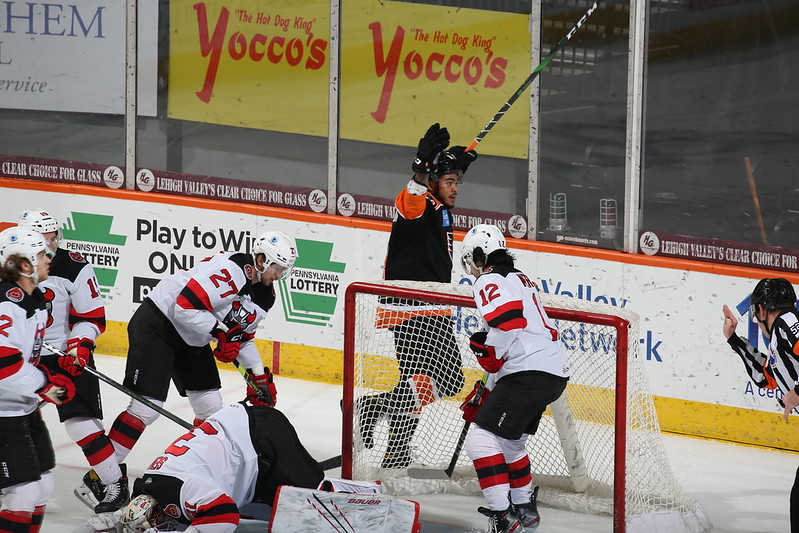 Lehigh Valley, PA – Zayde Wisdom scored a pair of goals for the second consecutive game and Zane McIntyre turned aside all 25 shots he faced as the Lehigh Valley Phantoms prevailed 3-0 over the Binghamton Devils in its 2021 home opener on Saturday night at PPL Center. Max Willman also tallied his first of the season and veteran captain Cal O’Reilly contributed a pair of assists.

Lehigh Valley (3-0-1) improved to 5-2 all-time in home openers since arriving in Allentown in 2014 and the Phantoms franchise now boasts a record of 18-6-1 in home openers beginning with the Philadelphia Phantoms first home win in 1996.

The Phantoms were pleased to welcome a couple-hundred fans who won the opportunity to attend via the team’s season-ticket random lottery. And the team hopes to safely bring in more fans in upcoming home games.

18-year-old rookie Zayde Wisdom had the honor of scoring the first PPL Center goal of the season on a speedy setup by Ryan Fitzgerald who flew up the right-wing and then centered to Cal O’Reilly from behind the goal. O’Reilly’s initial effort was stopped by the left-pad of Devils goalie Gilles Senn but Wisdom was right there to knock through the rebound.

“It squeezed through his five-hole,” Wisdom said. “Got ‘er home. Another grinder goal but can’t complain about that. They don’t ask how, they ask how many, right?”

The Phantoms were off-and-running in a dominant start that had them out-shooting the Devils 10-1 to begin. Also included in the Phantoms’ opportunities were a pair of blasts off the post by Egor Zamula and Logan Day. The Devils were perhaps fortunate to only be down 1-0 after 20 minutes thanks to some snazzy goaltending from Senn. 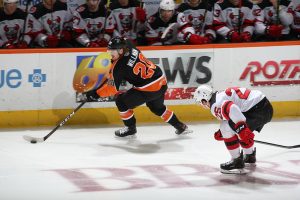 Lehigh Valley scored a pair in the second to extend its lead. Max Willman rifled his shot from the left circle off the far post and in. The puck came in and out so fast it was difficult to see for sure and initially it seemed as though Willman might have run into yet another snake-bit situation after hitting multiple posts earlier this season. But the referee, and Willman himself, saw the shot clearly at 4:20 of the second period, assisted by Logan Day.

Head coach Scott Gordon has also noticed Willman’s abilities as the Barnstable, Mass. native has moved from the fourth line to the team’s second line and continues to thrive.

“He’s got a lot of versatility, “Gordon said. “He can play both wings. He started the year playing center for us because we were short. And now he’s killing penalties for us. Lot of good things from him. I’m glad he came back. We saw it right from the get-go last year that he could be at least an AHL player and if he played his cards right, who knows, an NHL contract could be waiting for him.”

The Phantoms broke their power-play drought later in the period with their first man-advantage marker of the season. Cal O’Reilly spotted Wisdom in the slot who banged at a quick half-slapper one-timer to beat Senn at 8:39 of the second period for a 3-0 lead with Fitzgerald also assisting on the play.

O’Reilly’s second assist of the game gives him 487 for his career as he marches forward to becoming just the tenth player in AHL history to reach the 500-assist milestone. The Phantoms captain’s 613 career points rates 44th all-time and is most among AHL active players

The Devils had a significant push in the third period including a pair of power plays and a number of close-range chances on McIntyre. The Thief River Falls, Minnesota product had not seen a lot of action in the first 40 minutes but was significantly tested in the third period when he made several dazzling stops on Nick Merkley and Brett Seney among others. McIntyre’s 14th career shutout came against the team he played for at the end of last season when he went 4-0-0 with the Devils including a pair of shutouts. 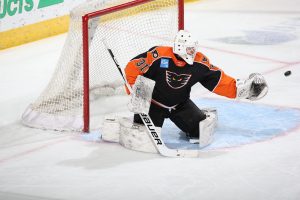 McIntyre improved to 3-0-1 and has played every minute in net for the Phantoms this season.  The former long-time Providence ruins netminder has a 1.73 goals-against average and .942 save percentage to open his tenure with the Phantoms.

It is the first-ever shutout win in a home opener in Lehigh Valley history and is just the fourth shutout in a home-opener for the Phantoms franchise. Neil Little in 2002 posted a 1-0 win over Rochester. Jean-Marc Pelletier won 2-0 over the Wilkes-Barre/Scranton Penguins in 1999 in the first-ever game for the Penguins. And Brian Boucher had a 0-0 tie against Syracuse to open the 1998-99 campaign.

The Phantoms have played just four games in the first 14 days of the season but the pace will pick up considerably in the near future with three games next week in a four-day stretch. The Phantoms travel to Newark, NJ for a rematch against the Devils on Wednesday at 6:00 and then will trek to Wilkes-Barre for their first encounter with the Penguins on Friday at 5:00. The Lehigh Valley Phantoms return to PPL Center on Saturday, February 27 at 7:05 p.m. against the Wilkes-Barre/Scranton Penguins.