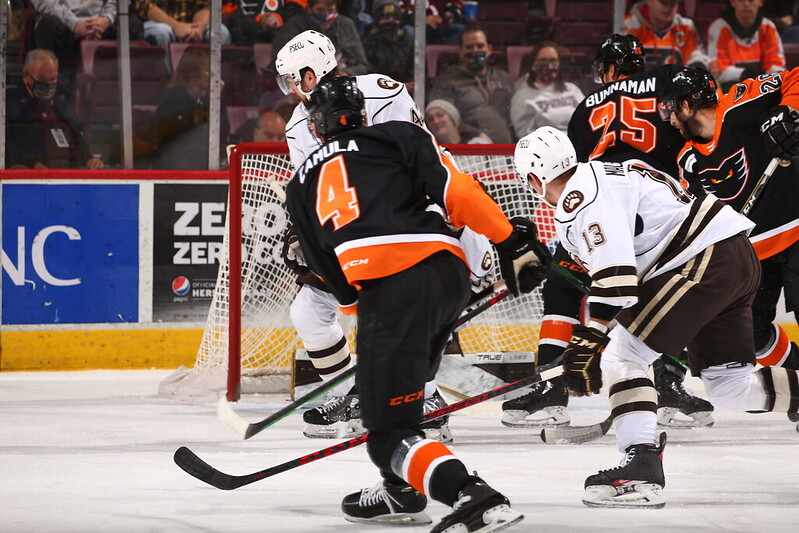 Phantoms Rally From Three Down But Hershey Wins in OT

Hershey, PA – The Phantoms put together their second big multi-goal comeback in less than a week capped by Egor Zamula’s tying goal with just 16.1 seconds left but the Hershey Bears recovered for a 4-3 overtime decision on Wednesday night at Giant Center.

The Phantoms (9-11-7) extended their point streak to eight at 6-0-2 which is tied for the longest point-streak in Lehigh Valley history which had been done two previous times in March 2018 and November 2016.

Lehigh Valley was trailing 3-0 in the second period but orchestrated another exciting rally not unlike the four-goal comeback they engineered at the Utica Comets on Friday. And this one was equally unlikely. The Phantoms were without three key forwards with Cal O’Reilly, Maksim Sushko and Isaac Ratcliffe all sitting out due to COVID-19 protocols. So the Phantoms only had nine natural forwards in the lineup while using defensemen Mason Millman and Ryan MacKinnon as the teams fourth-liners. 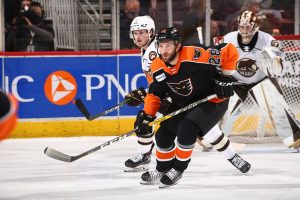 But the Phantoms persevered. Linus Sandin (1st) and Charlie Gerard (2nd) scored late in the second and early in the third and then Zamula tied the game with the team’s second 6-on-5 extra-attacker goal of the week.

The Hershey Bears blitzed the Phantoms to start and raced out to a 2-0 lead in the game’s opening five minutes. Joe Snively rushed up with Garrett Pilon for a chip in goal just 17 seconds into the game for the opening tally. Pilon fell just one second shy of equaling his own record of fastest goal ever scored against Lehigh Valley. Last season on February 14, 2021 he scored just 16 seconds into the game.

Shane Gersich (6th) worked his stick through a jam in the slot to knock in the second goal of the game just five minutes in for a 2-0 lead.

Lehigh Valley found some push-back late in the first period and Nick Lappin dropped the gloves with Hershey’s Ryan Dmowski in the closing seconds of the frame to spark additional inspiration.

The Phantoms were getting their game going even more when some bad luck would burn them in the form of strange bounce for Hershey’s third goal. Pat Nagle aggressively came out of his crease to play the puck and wanted to shoot it away from the onrushing Axel Jonsson-Fjallby and off the glass but instead accidentally fired it off the helmet of one of his teammates. The puck immediately caromed right back behind him where Jonsson-Fjallby was able to walk it in for the 3-0 lead in the second period.

But the Phantoms were now playing stronger with their new combo and lineup.  Hayden Hodgson’s shot was deflected in by Brennan Saulnier but the goal was immediately waived off for a high-stick touch above the crossbar. Ryan MacKinnon, playing at forward for the first time, found Connor Bunnaman in front of the net who just missed. And Lehigh Valley pressed on.

Finally, it was Matt Strome in the right corner who got to a puck and found German Rubtsov behind the goal on the other side. Rubtsov’s quick puck movement out in front connected with an open Linus Sandin in the slot who buried his first of the year. Sandin had been injured at Hershey on October 17 when a shot got him in the face. He missed almost two months following that injury and tonight was his first game back in the building where he had the frightening incident.

Just like Friday, the Phantoms would score in the first minute of the final period to gain momentum while cutting the deficit even further with a key goal. This time it was Charlie Gerard from the left of the cage knocking it in as the Phantoms had quickly rushed up ice with Nick Lappin connecting with Connor Bunnaman who spotted the open Gerard breaking for the net.

Bunnaman rushed up with just over two minutes left for a big try for a tying goal but his point-blank chance on a pass from the corner was denied by Zach Fucale.

Egor Zamula eventually came through with the exciting equalizer with just 16.1 seconds left to send the Phantoms to their third consecutive overtime.

But Hershey raced in and again found a beneficial deflection when a blocked pass got through to Gersich and Bobby Nardella on the backdoor. Gersich reached over to get to the puck first and swing it in behnd the right skate of Nagle for the winner.

The Phantoms are 2-1-1 against Hershey this season. Lehigh Valley is opening a stretch of four consecutive away games which will continue on Friday night and Sunday afternoon at the Providence Bruins.