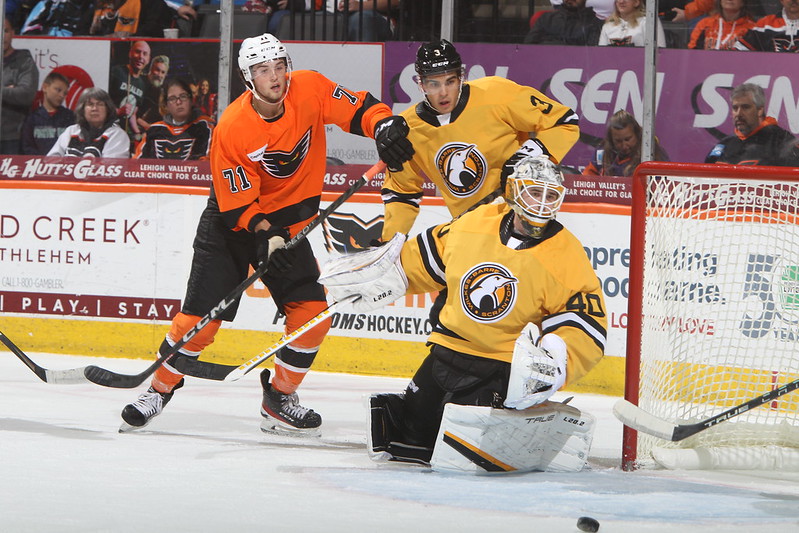 Lehigh Valley, PA – Whether Cam York had a goal and an assist or a two-assist performance doesn’t really matter. Ultimately, he triggered both Phantoms goals in a 2-1 preseason win over the Wilkes-Barre/Scranton Penguins on Wednesday night at PPL Center.

York’s shot deflected in with just 54.4 seconds remaining to break a late 1-1 deadlock. At first, it appeared his center-point drive on the power play went off the body of defenseman Jon Lizotte. But Phantoms forward Zack MacEwen was at the net-front as well and was credited with the goal on the scoresheet.

Either way, York was the catalyst for a pair of Phantoms’ lamplighters, both on deflected center-point shots. Tyson Foerster got a piece of York’s drive late in the second period that he put over the shoulder of Wilkes-Barre/Scranton goalie Dustin Tokarski to break the scoreless deadlock late in the second period. Foerster scored two of the team’s four goals in the preseason. 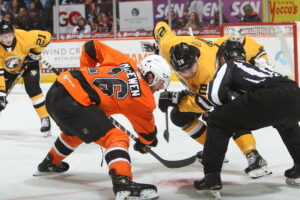 That opening score came off a Jackson Cates faceoff win in the left circle that he cleanly knocked back to defenseman Louie Belpedio who quickly rotated over to York. The low liner from York was knocked upstairs and over the goalie’s shoulder by Foerster with 3:26 left in the second period to finally break the scoreless goaltenders’ duel between Troy Grosenick of the Phantoms and Dustin Tokarski of Wilkes-Barre/Scranton, who had played for the Phantoms five seasons ago.

Jackson Cates was buzzing in the game as well. Centering a top-line with Olle Lycksell and Tyson Foerster, Cates had a pair of shots that found the iron behind Tokarski.

Valterri Puustinen finally put the Penguins on the board with 7:15 left in the third period on a rebound of a corner shot that Pat Nagle kicked out.

Try and try again the Phantoms did on the power play. They certainly got some time with their man-advantage but came up empty on their first six times. The good news was that the Phantoms were getting those power plays to begin with. Several of them came from Wilkes-Barre/Scranton players who were beaten and needed to break up scoring tries.

But, with under a minute left, the Phantoms came through when it mattered most when York’s drive found its way into the net, whether off a defenseman or his own teammate. It was a great way for the Phantoms to put the finishing touches on their preseason schedule and speed ahead into the regular season opener on Saturday night at Wilkes-Barre/Scranton.

Also keep in mind that the Phantoms played this preseason contest without three of their key power-play pieces as Cal O’Reilly, Garrett Wilson and Linus Sandin all sat out.

Lehigh Valley finished the preseason with a 2-1-0 record. The Penguins concluded at 3-1-0. Tonight’s game also represented the final exhibition contest for the entire American Hockey League.

Next time the Phantoms play it will count. The season opener is a 6:05 p.m. engagement at the Wilkes-Barre/Scranton Penguins. Lehigh Valley’s opening road-trip continues with a Sunday 3:00 p.m. matchup at the Hershey Bears.