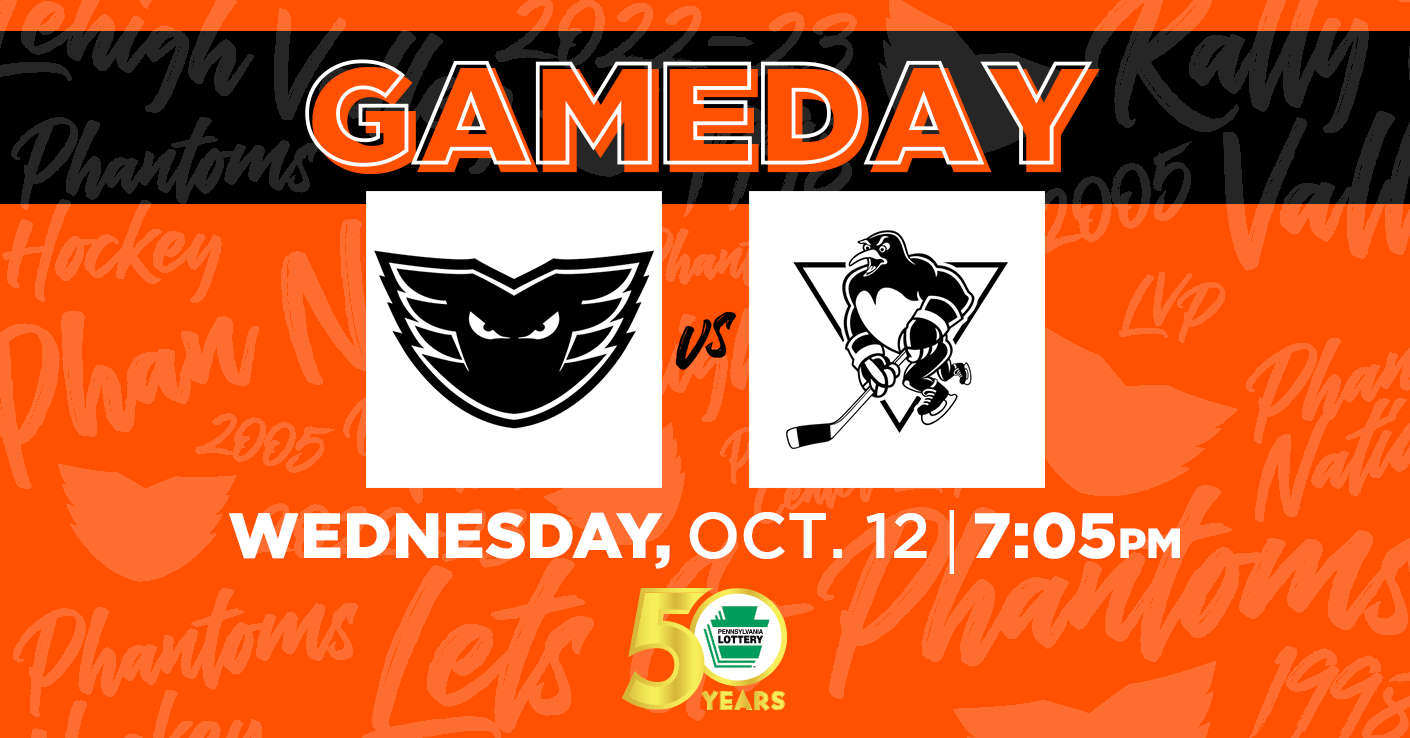 TONIGHT – It’s a Phantoms Game Day, presented by the Pennsylvania Lottery, as the Lehigh Valley Phantoms conclude their preseason slate hosting the Wilkes-Barre/Scranton Penguins at PPL Center. This is also the last preseason game for all teams in the American Hockey League.

LAST TIME – The Lehigh Valley Phantoms received goals from Tyson Foerster and Jordy Bellerive in a well-played 2-1 exhibition game victory over the Hershey Bears on Saturday night at PPL Center. Wyatte Wylie had a pair of assists and Bellerive also dropped the gloves late in the game in addition to scoring a goal. Pat Nagle made 16 saves on 17 shots and his perfect night was finally broken by Ethan Frank’s breakaway goal with under two minutes remaining in the second period.

TRANSACTIONS – Since Saturday’s game, the Phantoms have received additional support from the Philadelphia Flyers including forwards Jackson Cates, Zack MacEwen and Cooper Marody as well as defenseman Kevin Connauton and goalie Troy Grosenick. All five recently received players have NHL experience. Forwards Charlie Gerard and Alex Kile have been sent to ECHL teams in Reading and Maine respectively. Mason Millman, Colin Felix, Garrett McFadden and Trey Bradley were also among the players sent to the Reading Royals.

OUTLOOK – Veteran leaders and captains Cal O’Reilly and Garrett Wilson lead the group that also includes familiar names such as Isaac Ratcliffe, Max Willman, and Linus Sandin, all of whom made their NHL debuts last season. O’Reilly is the AHL’s active career scoring leader and is 535 career assists place him 8th all-time. The veteran 36-year-old of over 1,000 pro games set a personal best with 21 goals last year.

Adam Brooks is a center who brings valuable experience to the Phantoms after playing for three different NHL teams last season (Montreal, Winnipeg, Vegas). Cooper Marody has back-to-back campaigns scoring 21 goals and led the AHL in lamplighters two seasons ago with Bakersfield. The former Bakersfield Condor and Edmonton Oiler has returned to the organization that originally drafted him out of the University of Michigan.

Jordy Bellerive spent the last three seasons as a hard-working agitator with the Wilkes-Barre/Scranton Penguins and immediately won fans with his new team with a goal and a fight this past Saturday. Louie Belpedio is a Miami-Ohio product who scored 11 goals as a defenseman for the Laval Rocket last year and previously spent three seasons with the Iowa Wild.

33-year-old goalie Troy Grosenick was a 2nd Team AHL All-Star last year with the Providence Bruins when he led the circuit in GAA (2.00) and Save Percentage (.933). He won the league’s Baz Bastien Memorial Award as Goaltender of the Year in 2017 with the San Jose Barracuda in a season that included a stop at PPL Center in the AHL All-Star Classic. Popular U.S. Olympian Pat Nagle is back with the Phantoms and joins WHL all-time wins leader Nolan Maier to bolster the team’s goaltending corps.

In total, there are 26 players on the current roster.

TONIGHT’S OPPONENT – The Wilkes-Barre/Scranton Penguins include former Phantoms goalie Dustin Tokarski again. After playing for the Phantoms in 2017-18 and then the Penguins in 2019-20, Tokarski saw his most significant NHL playing time in several years when he played in 42 games for the Buffalo Sabres over the past two seasons. Drake Caggiula recorded two assists against the Phantoms in last week’s preseason encounter at Wilkes-Barre as the NHL veteran of 278 games with EDM, CHI, AZ and BUF tries to work his way back up to the NHL. The former University of North Dakota standout has NEVER played a regular season game in the NHL.
Alex Nylander is a former Buffalo first-rounder who thrived with Wilkes-Barre/Scranton in the second half of last season after coming over from the Chicago Blackhawks organization in a trade.

BROADCAST – Catch all the action of tonight’s preseason game on Service Electric Network with Steve Degler and Steven Swavely in the booth along with Dan Fremuth and Kristi Fulkerson from the studio and with in-game interviews. The radio voice of the Phantoms, Bob Rotruck, has the action on the Phantoms 365 app beginning with the pregame show at 6:45 p.m. Fans can also listen on 1470-WSAN and on their smart speakers at “Play Phantoms Radio 24/7”. Also available at the “Listen Live” button on PhantomsHockey.com

UP NEXT – Lehigh Valley opens the regular season with a return visit to the Penguins on Saturday, October 15 at 6:05 p.m. and will continue the weekend stretch with a game at Hershey on Sunday, October 16 at 3:05 p.m.