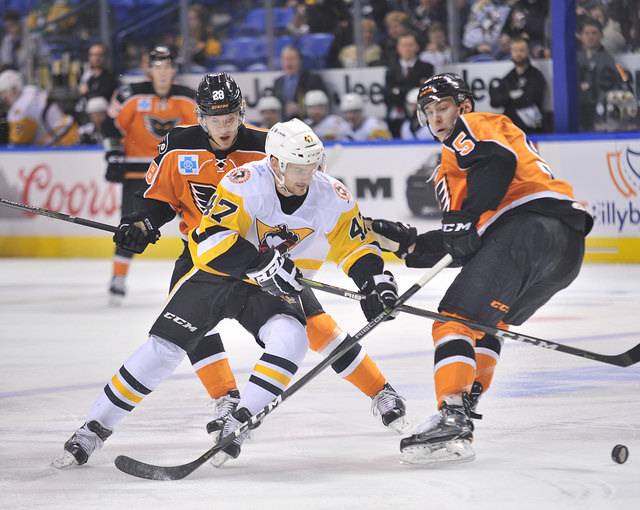 Alex Lyon Sensational in 34-Save Performance

Wilkes-Barre, PA – The Lehigh Valley Phantoms raced out to an early 2-1 lead on the road at the first-place Wilkes-Barre/Scranton Penguins but Casey DeSmith slammed the door after that providing an opportunity for a 4-2 come-from-behind decision on Wednesday night in Northeast Pennsylvania. The highly anticipated matchup of the top two teams in the Atlantic Division was a back-and-forth affair that saw the Penguins lead 1-0 in the opening seconds before the Phantoms turned the tables on the hosts for a 2-1 advantage only to watch Wilkes-Barre/Scranton respond with the next three conversions.

Corban Knight (2nd) and Greg Carey (6th) both struck for the Phantoms in the opening seven minutes of the game but Lehigh Valley was unable to bust through after that. Trailing 3-2 with about 5:00 to go, Myers walked in with a big shot that Chris Conner deflected off the left post and out. That’s how close the Phantoms came to tying to game late in the closing minutes of the contest. 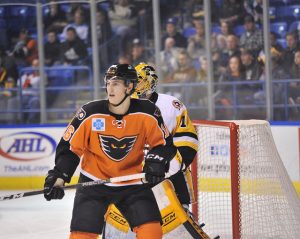 Ryan Haggerty paced the Penguins attack with two goals and one assist including an empty-netter with less than one second remaining that capped the night and sealed the win. Casey DeSmith improved to 9-0-1 while the Wilkes-Barre/Scranton Penguins extended their point streak to 12 games (11-0-1) while Lehigh Valley’s overall record moved to 10-6-2 entering the final game of their six-game road swing on Friday night at Springfield.

The Phantoms dominated the first period with a 15-3 shots advantage to start and a 16-5 lead by the intermission. Lehigh Valley’s lead on the road could easily have been greater than just the one goal but DeSmith bounced back from a couple of early goals against him. After the first intermission came the big change and the Phantoms were no longer dominating the play.

“It was a great first period for us,” Head coach Scott Gordon said. “And the bottom line is we didn’t play like that in the second. We took three penalties that led to us being shorthanded for six of the first 10 minutes of the second period and it’s pretty hard to get momentum when you’re not able to put together 5-on-5 shifts to build.”

It was Ryan Haggerty who stepped in and around Lyon just 31 seconds into the game after Jean-Sebastian Dea picked one off in the Phantoms zone. Haggerty was all alone on the Phantoms netminder to curl around the diving poke attempt and flip through a backhander that barely eluded the paddle and crossed the line.

New forward Alex Krushelnyski entered the scoresheet in his Phantoms debut with a cross-ice pass from the corner that Corban Knight buried for his second of the year. T.J. Brennan also assisted on the equalizing goal at 5:29 into the first period for a 1-1 tie. 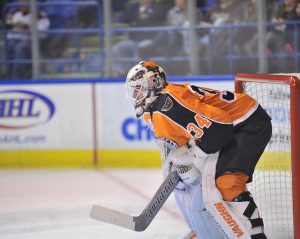 The Phantoms struck again just 85 seconds later when Mark Friedman’s point-shot through traffic handcuffed Casey DeSmith. Nicolas Aube-Kubel quickly offered a rebound try that bounced back off the crossbar but Greg Carey was right there for the tap-in from the crease to finish the flurry and give Lehigh Valley a 2-1 lead before the 7:00 mark of the game.

The rest of the first period was one Phantoms opportunity after another with the Wilkes-Barre/Scranton Penguins barely unable to escape their own zone. Lehigh Valley had the hosts hemmed in on numerous occasions but were unable to build on their lead.

The tide changed in the second period with the Penguins taking control of the play and eventually taking the lead. Lyon made two of his best saves of the period in the opening minutes first denying an onrushing Dominik Simon with a nifty glove save. Later he used the glove again for a spectacular stop that may have been his best of the year when he robbed Colin Smith on the right of the cage perched on the backdoor.

The Penguins finally broke through when Haggerty and Dea took advantage of a neutral-zone turnover and raced away for a 2-on-0 back at Lyon which Dea (5th) would successfully bury for a 2-2 tie at 6:57 into the second period.

Simon and Smith would not be denied later in the second period with Smith converting at 15:54 for a 3-2 lead. That second period shift was the big difference in the contest.

“We got into some penalty trouble,” said Cobran Knight. “And you could tell they were gaining some momentum and we were never able to really take the game back from then on.” 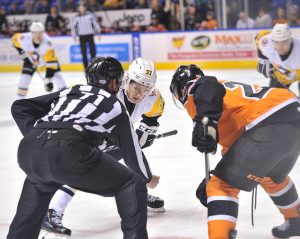 The Phantoms had some chances to tie in the third including the Conner post deflection with about 5:00 left but eventually the Penguins raced away for an empty-netter right before the game ended with Dea’s shot that was blocked by T.J. Brennan coming out to Haggerty for the put-back and the very end for the 4-2 final.

The Phantoms were out shot by Wilkes-Barre/Scranton 38-33. Both teams were 0-for-4 on the power play.

The Phantoms play the final game of their six-game road swing on Friday night at the Springfield Thunderbirds. The Lehigh Valley Phantoms return home for the first time in almost three weeks on Saturday night when the Bridgeport Sound Tigers arrive for a 7:05 p.m. engagement on Legends of Wrestling Night featuring Whitehall’s very own “Nasty Boys.” A live auction of game-worn jerseys will immediately follow the game as well. Secure your tickets at PPLCenter.com or by calling (610) 347-TIXX (8499).
Lehigh Valley Phantoms 2 at Wilkes-Barre/Scranton Penguins 4 – Status: Final
Wednesday, November 22, 2017 – Mohegan Sun Arena at Casey Plaza