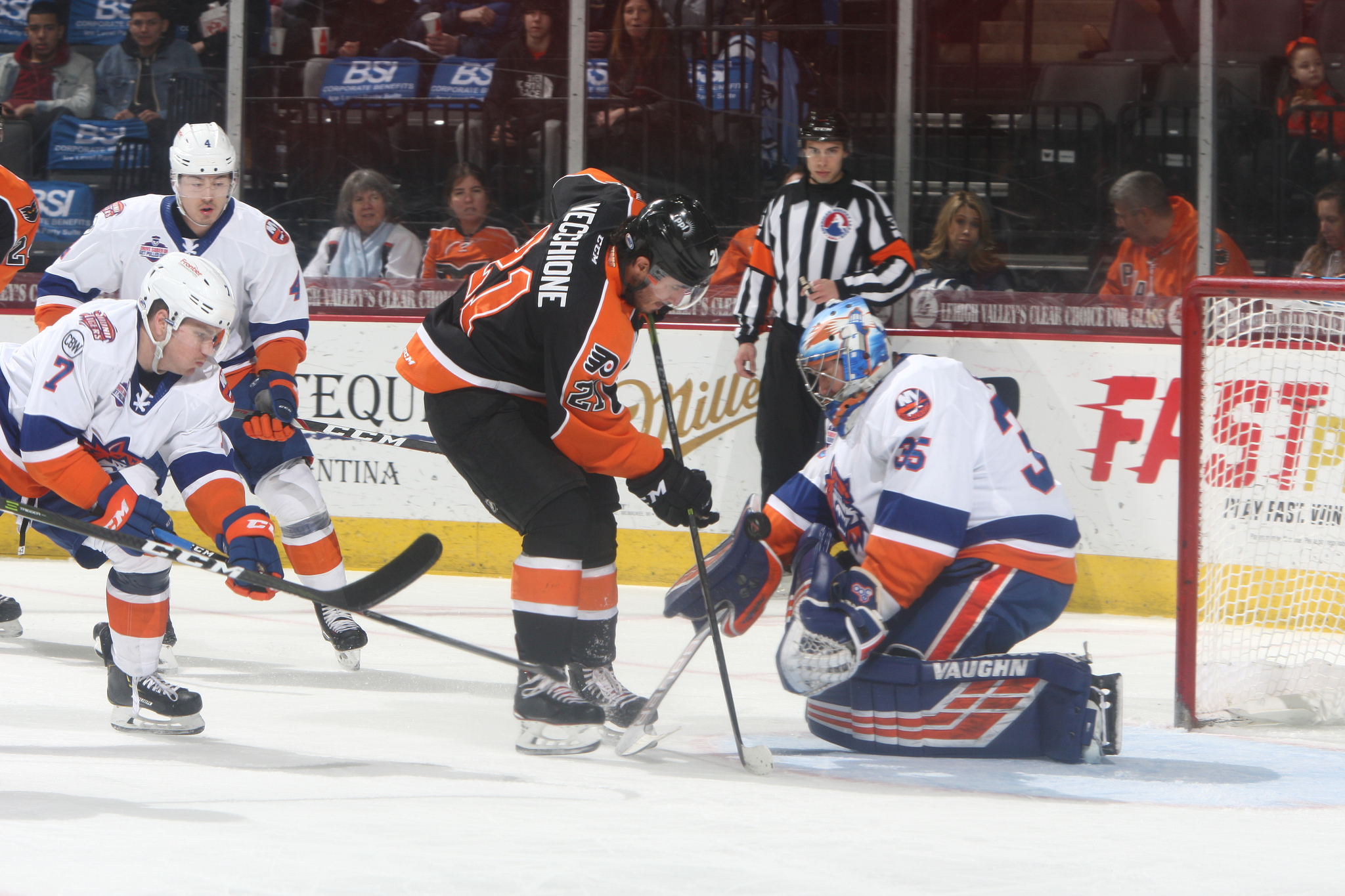 Lehigh Valley, Pa. – The Lehigh Valley Phantoms (28-24-3-3) concluded a 3-in-3 weekend, falling 3-1 to the Bridgeport Sound Tigers (35-18-5-2) in the final meeting between the two teams. Mike Vecchione scored late in the game for the Phantoms to make it a one-goal game but it wasn’t enough as the second-place Sound Tigers held on to win. Lehigh Valley finishes the season series 3-2-1 again Bridgeport. 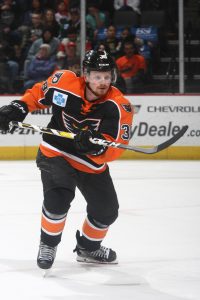 Lehigh Valley thought they were able to break through with 1:36 remaining in the first period but it was overturned after an official review. A loose puck bounced off Jeremy Smith and up into the air but David Kase slapped the puck with his hand and after the officials took a look, it was ruled no goal.

Bridgeport had a close call of their own about five minutes into the second period. Sound Tigers’ captain, Ben Holmstrom was camped out in front of the crease and was able to redirect a shot that tied up Alex Lyon but it hit off the post and stayed out.

The Sound Tigers were able to get on the board soon after, 10:27 into the second period. Chris Casto carried the puck into the Phantoms zone and dropped a pass off to Steve Bernier in the slot. Bridgeport’s leading goal-scorer was able to skate right into a shot and fire one past Lyon for his 20th goal of the season to give the Sound Tigers a 1-0 lead.

Bridgeport made it a two-goal game just two minutes into the third period off Matt Lorito’s third goal of the season. Tanner Fritz and Lorito got in on a two-on-one and Fritz fed a pass over to Lorito who was able to squeeze a shot through Alex Lyon to make it 2-0.

The Phantoms got a huge opportunity with 11:39 left in the game when an interference call, followed by a faceoff violation gave Lehigh Valley a 5-on-3 for a full two minutes. The Sound Tigers were able to kill off the penalty as the Phantoms were unable to score on the two-man advantage.

Lehigh Valley kept fighting until the end, as they were unable to cut the deficit to one with 58 seconds remaining when Mike Vecchione was able to avoid the shutout with a power-play goal. It was Vecchione’s 13th tally of the season.

Matt Lorito scored an empty net goal for his second tally of the game as Bridgeport took this one 3-1 in the final meeting between the two teams.

NEXT TIME OUT: The Lehigh Valley Phantoms will have a short layoff as they are back in action Wednesday, March 6 on the road against the Wilkes-Barre/Scranton Penguins. They will return to PPL Center for a pair of games against the Charlotte Checkers on Friday and Sunday.