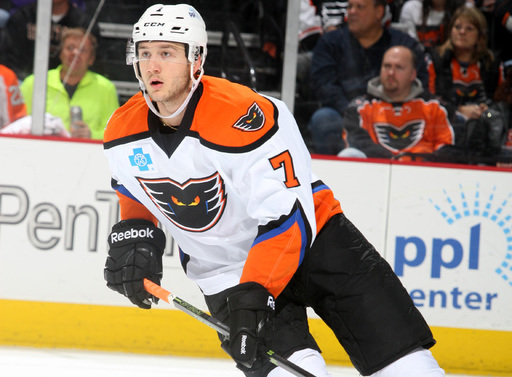 Lehigh Valley, PA – The Philadelphia Flyers, parent club of the Lehigh Valley Phantoms, have reassigned defenseman Christian Marti from the Reading Royals of the ECHL to the Phantoms.

A 22-year-old blueliner from Bulach, Switzerland, Marti is in the midst of his first professional season and has registered one assist in six games with Lehigh Valley this year. He was reassigned to Reading late last week and produced three shots on goal and a minus-one rating in a pair of games with the Royals over the weekend.

Before joining the Phantoms, Marti spent the last two seasons with Geneve Servette in the Swiss-A league where he compiled five goals, 15 assists and 20 points across 82 games.

The Phantoms return to PPL Center for a pair of games next weekend. First, on Friday, January 15, Lehigh Valley welcomes the rival Hershey Bears to downtown Allentown for a 7:05 p.m. showdown. Friday’s game features a T-Shirt Giveaway where the first 8,500 fans in attendance will receive a FREE shirt featuring the names of each member of the Phantoms organization. Then, on Saturday, January 16, it’s Girl Scout Night when the Hartford Wolf Pack, the AHL affiliate of the New York Rangers, invade PPL Center for a 7:05 p.m. clash.