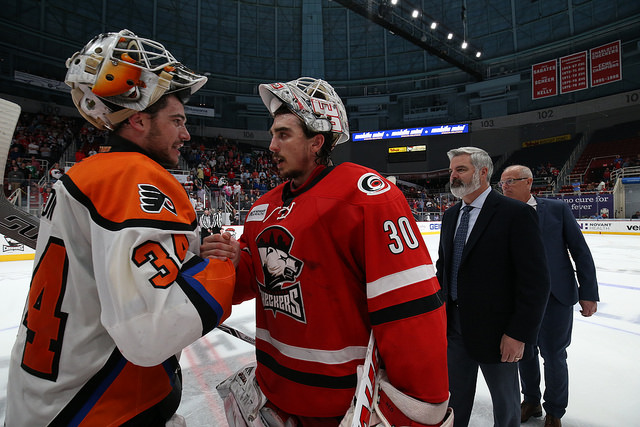 Charlotte, N.C. – Five different Phantoms scored in a balanced offensive attack pushing the Phantoms to a 5-1 victory in Game 5 of the Atlantic Division Finals at Bojangles’ Coliseum in Charlotte, N.C. on Saturday evening. Lehigh Valley’s victory clinches the series over the Charlotte Checkers at 4 games to 1 and allows the Phantoms to advance to the Eastern Conference Finals against the Toronto Marlies. 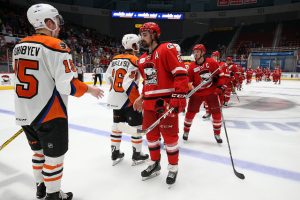 Alex Lyon continued his remarkable performance in the Calder Cup Playoffs with 27 saves on 28 shots. Lyon’s streak of 97 consecutive saves was finally broken by the Checkers at the 6:00 mark of the third period ending his incredible scoreless streak at 165:54 going back to the second period of Game 4 well before the night would continue into an epic five-overtime match. 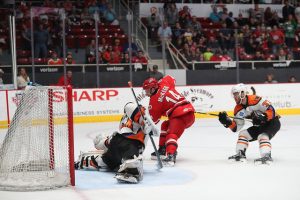 The Phantoms arrived to Charlotte at the beginning of the week in a series that was tied 1-1 and were coming off a humbling 6-0 loss at home in Game 2. But Lehigh Valley responded with a pair of 5-1 triumphs in Games 3 and 5 and, in between, won the epic Game 4 marathon in the fifth overtime 2-1. Charlotte had lost consecutive games at home only one other time this season and had not lost three consecutive home games all year. The highest scoring team in the league were virtually unable to solve Alex Lyon all throughout the series. 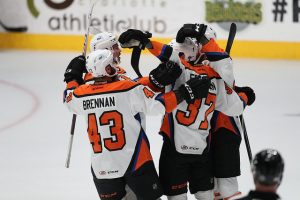 Next up are the Kilpatrick Trophy winning Toronto Marlies who were the only team in the league with a better record than Lehigh Valley. The top two teams in the AHL will begin their Conference Finals showdown series next Saturday and Sunday in Toronto with a pair of 4:00 p.m. games. Lehigh Valley will host Games 3, 4 and 5 of the series on Wednesday May 23, Friday May 25 and Saturday May 26.

Corban Knight started the scoring when he threw a shot towards the net from way back on the left point after some work on the boards by Lindblom forced a poor clearing try. Knight’s shot eluded Charlotte goaltender Alex Nedeljkovic to the stick side on the far side of the cage for a 1-0 lead. The tally was Knight’s first of the Calder Cup Playoffs.

The Phantoms extended their lead with a pair of goals in the second period. Veteran Chris Conner lifted the stick of Charlotte’s Andrew Miller, stole the puck at the Phantoms line, and raced out for a breakaway. Conner steered the puck from his backhand on the left of the cage through the five-home of Nedelkjovic for a 2-0 lead on an unassisted goal at 13:56 of the second period. His fourth goal of the Calder Cup Playoffs was somewhat reminiscent of his game-winning goal in the playoffs last year at Hershey in Game 3 when he scored in overtime to force a Game 4. 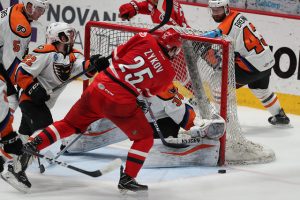 Just over four minutes later, Tyrell Goulbourne battled his through a defenseman to pick up a shot from Lindblom that had been blocked. Goulbourne quickly spun around in the slot and scored his first of the playoffs for a 3-0 lead. Goulbourne sat out the Game 4 marathon with an injury but upon returning for Game 5 seemed to be faster than other defenders trying to keep up with him. Lindblom and Max Lamarche assisted on the play.

The Phantoms built on their lead early in the third period with Philippe Myers scoring his second of the playoffs on a drive from way back on the right point that escaped the clutches of Nedeljkovic at 4:04 into the third. Lindblom had pushed the puck along the boards back to Myers for his second assist of the game. 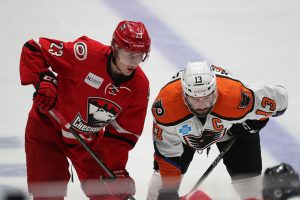 Charlotte finally solved the Alex Lyon puzzle at 5:58 of the third on a right-point shot by defenseman Roland McKeown through a screen that found the far side of the cage for a 4-1 game.

But Lehigh Valley struck back with the finally dagger on the Checkers with McDonald crashing his way through on the forecheck to shove a defender away while Alex Krushelnyski secured the puck in the left corner. The Game 4 overtime hero quickly connected back to McDonald who scored from in tight on the blocker side of Nedeljkovic at 7:18 for a 5-1 lead and last conversion of the night.

And with the conclusion of the game, and the series, came the traditional handshake line that is customary at the end of any hockey playoff series.

Charlotte out shot the Phantoms 28-24. Both teams were 0-for-1 on the power play. Lehigh Valley improved to 7-2 in the postseason entering their Eastern Conference Finals match-up with the very strong Toronto Marlies contingent who are advancing to the third round for the fourth time in seven years. Lehigh Valley’s T.J. Brennan was a member of Toronto for two of those runs to the Conference Finals.

The Phantoms are appearing in the Conference Finals for the first time since 2005 when they eliminated Scott Gordon’s Providence Bruins 4 games to 2 on their way to the Calder Cup Championship in a 4 games to 0 sweep of the Chicago Wolves.