Lehigh Valley, PA – The best young players and future stars of the Philadelphia Flyers and New York Rangers are coming to the Lehigh Valley in September!
This exciting weekend series will be a great way for fans to kick off the hockey season as they experience the future stars of both of these teams.

PPL Center and the Lehigh Valley Phantoms have announced that tickets for the two-game Rookie Series between the Philadelphia Flyers and New York Rangers will go on sale Wednesday, July 13 at 10:00 a.m. Fans will be able to purchase their tickets at PPLCenter.com at that time. They may also contact ticketsales@phantomshockey.com with additional ticketing questions or for information on group discounts.

The Philadelphia Flyers and New York Rangers continue their fierce rivalry in a pair of Rookie Games at PPL Center on Friday, September 16 at 7:05 p.m and Saturday, September 17 at 5:05 p.m. The weekend provides a great opportunity to see future Flyers stars such as Wade Allison, Tyson Foerster and Cam York while the New York Rangers can counter with their own big names including 2021 and 2022 top picks Brennan Othmann and Adam Sykora.

Recent participants in past Rookie Game events for both teams have included Vezina Trophy winner Igor Shesterkin and Adam Fox of the Rangers as well as Carter Hart, Joel Farabee and Morgan Frost of the Flyers. The series can also include some of the newest prospects from the 2022 NHL Entry Draft who will be wearing a Flyers or Rangers game jersey for the very first time. And the weekend will mark the beginning of the John Tortorella era as his Flyers take to the ice against a rival where he had coached previously.

Tickets start at just $10 per game for the exciting event featuring terrific prospects from both organizations. Phantoms Premier Members will have their tickets for these games already included as part of their membership. 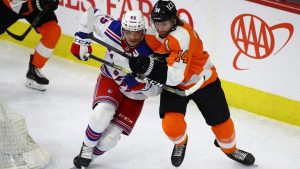 “We are very pleased to host this two-game Rookie Series vs. the New York Rangers at PPL Center,” said Flyers President and General Manager Chuck Fletcher. “Our rivalry with the Rangers is one of the best in the NHL and this gives us and the fans in the Lehigh Valley a great opportunity to see our prospects go head-to-head.”

“We are excited to be part of this two-game Rookie Series against the Flyers, and we would like to thank the Flyers organization for hosting these games,” Rangers President and General Manager Chris Drury said. “We look forward to seeing our prospects play in this setting.”

The state-of-the-art PPL Center opened in September of 2014 bringing exciting hockey, entertainment, and community events to the heart of the Lehigh Valley region and serving as the anchor and main catalyst to the revitalization and growth of downtown Allentown. Since debuting, the 10,000-seat multi-purpose venue has spurred over $1.5 billion in development and Allentown is now listed as a premier city that is one of the fastest-growing in America with over 5,000 new people working downtown and over three million square feet developed.

Tickets for the Flyers vs. Rangers Rookie Games on September 16 and September 17 will go on sale on Wednesday, July 13 at 10:00 a.m. and will be available HERE