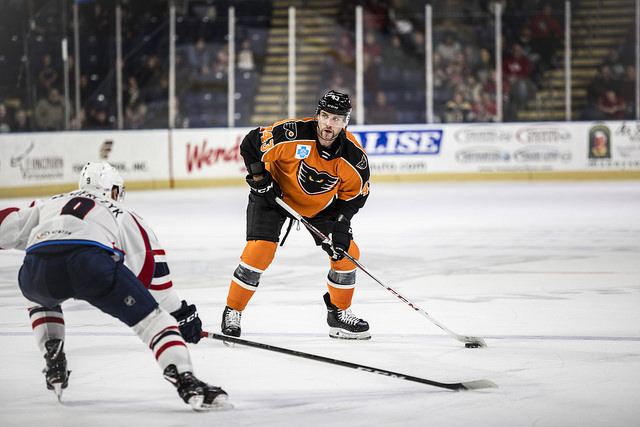 Springfield, Mass. – The Springfield Thunderbirds broke a 1-1 deadlock with a pair of goals early in the third period and then barely hung on for a 3-2 victory over the Lehigh Valley Phantoms on Saturday night at Mass Mutual Center.

T.J. Brennan registered a goal, an assist, and a fight, to record his first Gordie Howe Hat Trick as a Phantom.

Brennan (6th) and Greg Carey (9th) scored for Lehigh Valley while goaltender Carter Hart made 24 saves. But Thunderbirds netminder Michael Hutchinson was on top of his game in a 29-save performance that included several sharp denials the best of which was a diving glove save in the third period to rob Misha Vorobyev in the left circle on the power play.

Brennan’s goal was his 154th all-time in the American Hockey League pulling the veteran blue-liner to within 12 goals of John Slaney’s record of 166 goals by a defenseman. 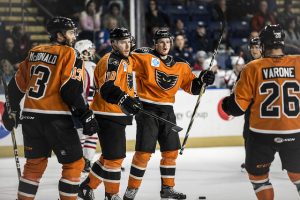 Greg Carey’s goal was his 68th since joining the Phantoms moving him into a tie with Danick Martel for the most ever on the Lehigh Valley team.

The game began with several big hits and physical altercations. 6:47 into the contest, Brennan dropped the gloves with 32-year-old Michael Haley who led the NHL in penalty minutes last year with the Florida Panthers. Haley is with Springfield on a conditioning stint. The scrap followed some contact in the crease in which T-Birds captain Paul Thompson landed on top of Carter Hart knocking off the helmet of the Phantoms rookie goalie in the process. A few seconds later, Haley gave a punch to the face of Hart that drew the ire of Brennan who stepped right in for his teammate.

Later in the first period, Brennan picked off a clearing try on the left boards and offered a quick shot to the net that missed the glove on the right hand of Hutchinson to give the Phantoms a 1-0 lead. But Springfield quickly tied the game 33 seconds later on Joel Lowry’s power-play point-shot through traffic that eluded Hart.

That marked the end of the Phantoms lengthy penalty-kill streak at 28 consecutive power plays denied. It was the first power-play goal the Phantoms had allowed since October 27. 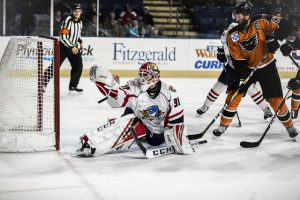 Springfield broke the tie early in the third period with consecutive goals by Jake Horton down low at 2:21 into the final frame followed by Michael Haley flipping in a rebound of a close-range Henrik Borgstrom slapshot at 3:58.

The Phantoms cut the deficit down to one with just 3:40 left on Carey’s blast from the right circle on a cross-ice feed by Varone that was also assisted by Brennan. But Lehigh Valley could not find the equalizer in what would have been the team’s fourth multi-goal comeback of the season and potentially would have been their second in a row. The Phantoms voercame a 4-1 deficit at Providence on Friday night for a 5-4 win.

The Phantoms are off until Thanksgiving weekend when they return to PPL Center with a pair of home games against Hershey on Black Friday on Rock Night including a T-Shirt giveaway and then Providence on Saturday featuring postgame autographs with the Phantoms players.