Lehigh Valley, Pa. – The Lehigh Valley Phantoms, proud AHL affiliate of the Philadelphia Flyers, in conjunction with the American Hockey League, are pleased to announce that forwards Taylor Leier (1st selection) and Jordan Weal (2nd selection) along with defenseman T.J. Brennan (4th selection) have been named to the 2017 AHL All-Star Classic presented by Capital BlueCross, to be held January 29-30 at the PPL Center. 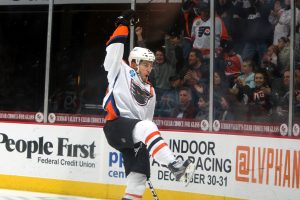 A 22-year-old forward from Saskatoon, Saskatchewan, Leier is in his third professional season and is currently tied for fifth among all Phantoms in scoring with 20 total points (6 goals, 14 assists). He returned to Lehigh Valley earlier this week following a 10-game stint with the Flyers where he tallied a goal, an assist and two points.

A fourth-round selection (#117 overall) by Philadelphia in the 2012 NHL Entry Draft, Leier finished second among all Phantoms with 20 goals and 49 points a season ago. 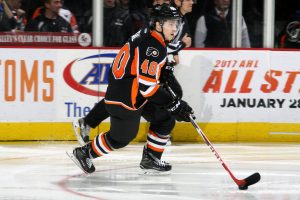 A 24-year-old forward from North Vancouver, British Columbia, Weal is currently in his fifth professional season and currently leads all Phantoms and is tied for fifth among all AHL skaters in total scoring with 31 points (10 goals, 21 assists). One of Lehigh Valley’s most consistent point producers, he’s recorded at least one point in 11 of his last 15 games and has already compiled nine multi-point outings this season.

A member of the 2015 Calder Cup champion Manchester Monarchs, Weal was awarded the Jack A. Butterfield Trophy as playoff MVP that year after an impressive 22 points (10 goals, 12 assists) in 19 postseason outings. This marks the second AHL All-Star nod for Weal after he represented the Eastern Conference in the 2015 AHL All-Star Classic held at the Utica Memorial Auditorium in Utica, New York. 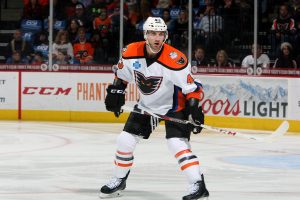 A 27-year-old defenseman from Willingboro, New Jersey, Brennan is in the midst of his eighth professional campaign and is presently second among all Phantoms and third among active AHL blueliners in scoring with 28 points (10 goals, 18 assists). He currently leads all AHL defenders with 10 goals and is tied for the league lead among blueliners with six power play conversions. Lehigh Valley’s most potent offensive contributor of late, Brennan has tallied 12 points (5 goals, 7 assists) over the team’s last 12 games.

A two-time Eddie Shore Award winner (2015-16, 2013-14) as the AHL’s best defenseman, Brennan will be appearing in the AHL All-Star Classic for the fourth straight season after representing the Toronto Marlies (AHL All-Stars) in 2014 in St. John’s, the Rockford IceHogs (Western Conference) in 2015 in Utica and the Marlies (North Division) again last year in Syracuse, New York.

Leier, Weal and Brennan will be members of the Atlantic Division team.

In the 2017 AHL All-Star Challenge on Jan. 30 (7 p.m. ET), the four teams will participate in a round-robin tournament featuring six games of 10 minutes each, played entirely at 3-on-3. The two teams with the best records at the end of the round-robin will face off for the championship, a six-minute game also played at 3-on-3.