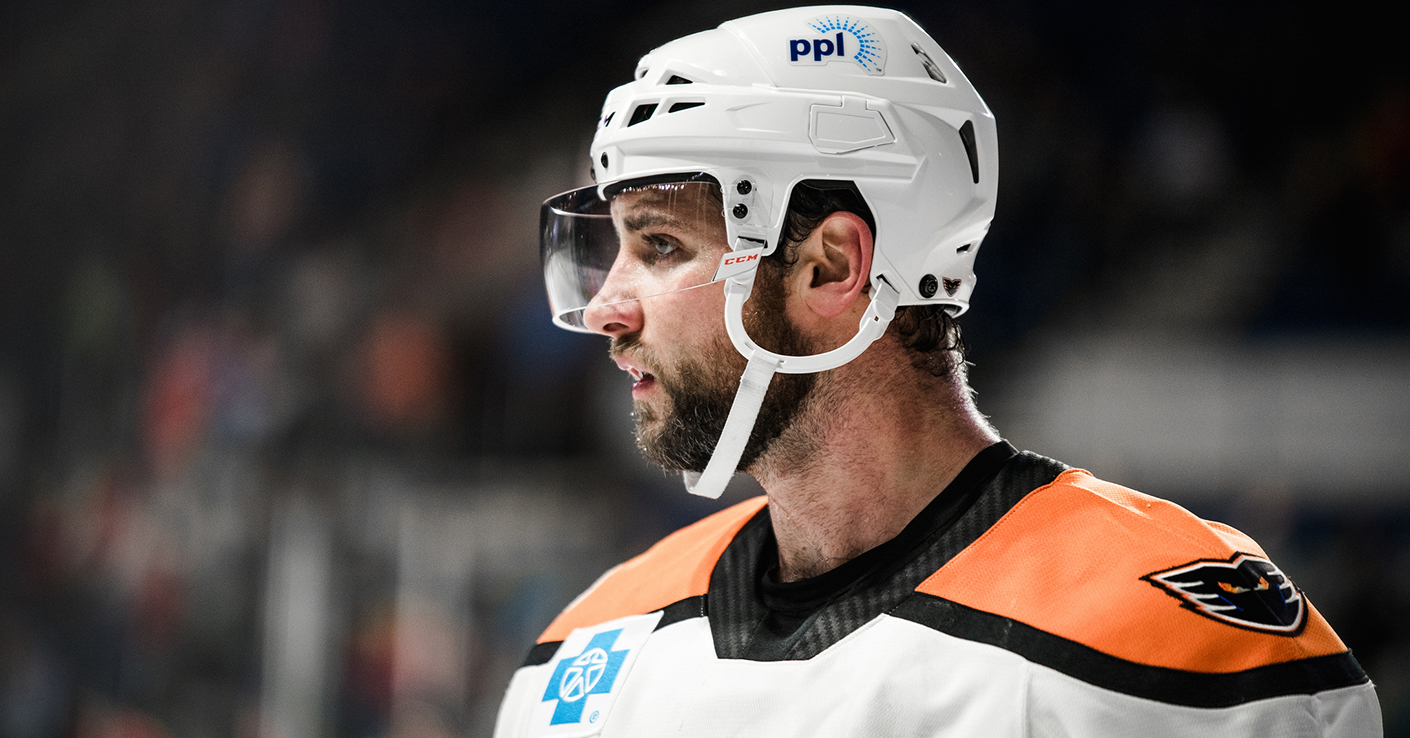 For any kid growing up as a die-hard Flyers fan in Moorestown, New Jersey, playing one game of professional hockey might seem like an impossible dream. For T.J. Brennan, he is living just that, his dream.

Last Friday night, October 11, 2019 against the Wilkes-Barre/Scranton Penguins, T.J. Brennan appeared in his 700th professional hockey game. Playing 700 pro games would be a milestone that means a lot to any hockey player, but for Brennan it means even more being able to do it so close to home for the organization he grew up rooting for.

“It’s been a journey,” Brennan said about the milestone. “I feel really lucky the past few years that I’ve really enjoyed where I’ve been at. Since I’ve signed here and I’ve been in Lehigh Valley, close to home, I feel like I’ve found a bit more of myself and really enjoyed the organization and I’ve just seen my game and myself grow as a person and to put that into numbers form with 700 games. In one perspective it feels like I’m just learning new things and in another perspective, 700 games is a lot of games. I don’t really know how to put that into words.” 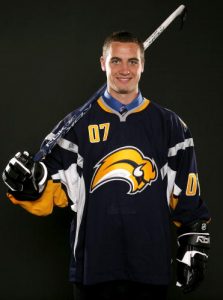 The milestone of 700 games is a huge accomplishment but doesn’t come without some struggles, obstacles and other milestones along the way. For Brennan, two of the milestones he thinks about early in his career that let him know he had made it was being drafted and playing his first professional game. Brennan was selected with the first pick of the second round in 2007 NHL Entry Draft by the Buffalo Sabres on June 23, 2007. “When I was first drafted I feel like that was the first huge milestone. When I was like whoa this is real,” Brennan said. As for Brennan’s first professional game, he made his pro debut for the Portland Pirates on October 9, 2009, but that was about six days longer than he would have liked to wait.

Brennan reached his next big milestone on November 23, 2011 when he got called up by the Buffalo Sabres and was set to make his National Hockey League Debut. 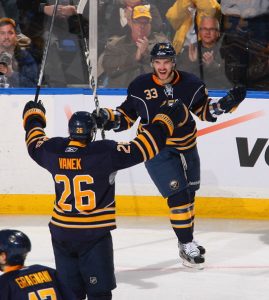 “That was fun. I was really lucky there,” said Brennan. “My first NHL game I got called up because Christian Ehrhoff got hurt. The game I was playing in was against the Boston Bruins and a lot of the spotlight was on if the Sabres were going to respond to Milan Lucic hitting Ryan Miller in the prior game between them, so it took a lot of pressure off me. Of course it’s always a highlight when somebody plays their first NHL game but I think I didn’t feel as much pressure because there was such a highlight on the rivalry brewing and it just allowed me to go out and have fun and just kind of play and I ended up scoring a goal so that was great.”

While with the Sabres orginzation, Brennan’s family wasn’t able to see him play as much as they do now, but luckily with Brennan making his debut so close to thanksgiving they were already on the way to see him and able to easily re-route so they could be in Buffalo for his first NHL game, and goal.

“My parents and family have always come up to where I’ve been for thanksgiving, we’ve always made that a tradition so they were on their way to Rochester when I got the good news so they had to make a couple adjustments to head to Buffalo so they were all their for my first game. It was great so I scored and my family was there, I remember being pretty emotional.”

Brennan, who is currently in his 11th professional season, has accomplished a lot during his career. He has played 53 games in the National Hockey League, is a five-time AHL All-Star, and two-time Eddie Shore Award Winner (AHL’s best defenseman) but even after 700 professional games, Brennan says he still has that passion for hockey and feels like he has plenty more to give and doesn’t see himself slowing down any time soon. 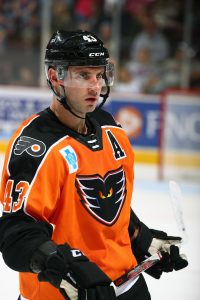 “I definitely feel really lucky that I’m still playing and I still love the game,” Brennan said. “This is a brand new season and I feel really refreshed and I’ve really rekindled that love for the game going into this year and I feel so excited about everything so to hit that kind of milestone I’ll probably sit back and think about it but hopefully I can make it another 700 more.”

After playing his first pro game for Portland as a 20-year-old, the now 30-year-old Brennan says the biggest different for him now compared to when he first started is his perspective and how he is able to balance out his life.

“I think when I first started I was so focused on hockey and I don’t really think I had much balance in my life and it probably helped me a lot to becoming decent at hockey and making a career out of it, but as I got older I realized how important it was that more isn’t always better and stressing about if you’re playing or how you’re playing and all that stuff, you learn how to overcome those battles,” Brennan said. “The person I am today, I try and come in with a great attitude and give my best every day and try and get better at certain things. Some days it’s a lot harder and some days it’s easier and I feel like I manage that a lot better now. I have a lot better relationship with the people I really care about and I prioritize a lot differently as a person. Hockey is so important to me and the people who are around me and that I love the most understand that but they are more incorporated and such a big priority in my life and I think when I was younger I didn’t really understand that and I was so lucky to have people who cared about me and saw that for me. Hockey is going to end at some point so it’s important to make sure I’m giving back to those I love and that they deserve time too.” 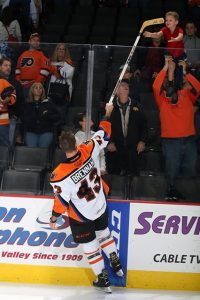 A big part of that happiness and balance Brennan has now has to do with playing in Lehigh Valley, and so close to where he grew up. This is Brennan’s fourth season with the Phantoms and over 200 of those 700 games have come in the black and orange, the most of any team he has played for.

Brennan is now a year-long resident of Lehigh Valley, living in Allentown with his girlfriend, Blair. His family still lives in South Jersey, just a short car ride away and Brennan feels being able to successfully balance his hockey career with his personal life in the area he loves has been very beneficial to him both on and off the ice.

“I’m really lucky to be close to home. To have a good personal life that I can go and see my family when I want to and they can come up and I’m playing for the love of the game and all the choices that I’m making are dictated around my own priorities,” Brennan said. “I’m lucky to be hitting a milestone like that in a place that I love to play, that I grew up loving. I have orange and black running through my veins so it’s really cool. It makes it all so much better”