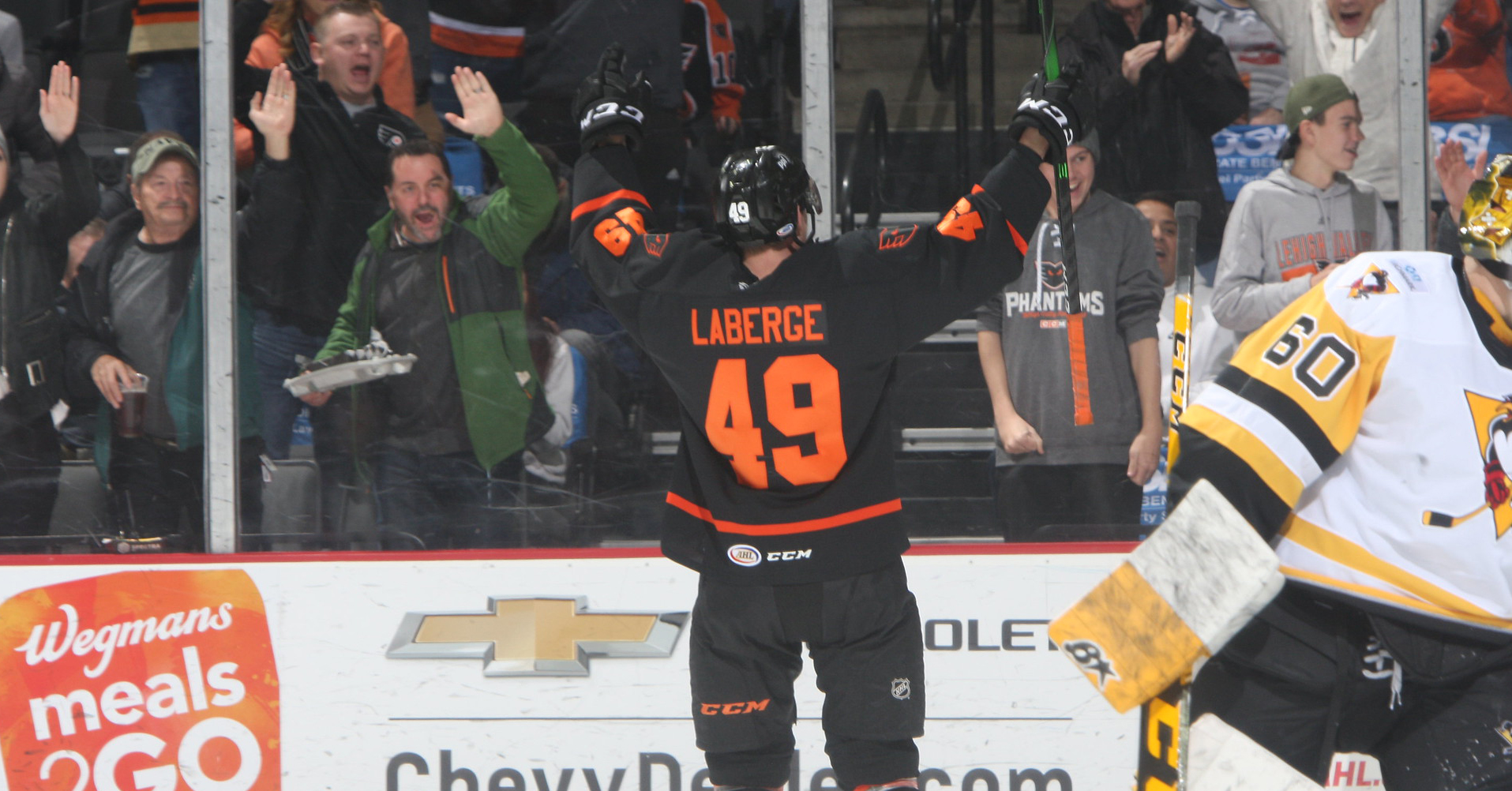 Phantoms Get Hot Start in 6-5 Win against Penguins

Lehigh Valley, Pa. – The Lehigh Valley Phantoms (9-7-1-4) defeated the Wilkes-Barre/Scranton Penguins (12-6-2-1) on Black Friday by a final score of 6-5 in a thrilling rivalry battle. The Phantoms scored five goals in the first 22 minutes of action before defenseman T.J Brennan netted the game-winning goal in overtime. Carsen Twarynski led the Phantoms with two goals and one assist while Matthew Strome, Pascal Laberge, and Issac Ratcliffe also tallied their own goals in the win.

Coming off a loss to the Penguins on Wednesday night, Phantoms forward Kurtis Gabriel looked to set the tone early and provide a jump start to the Phantoms in Friday night’s rematch. Gabriel and Penguins forward Jamie Devane dropped the gloves just two minutes and fifty seconds into the game and squared off at center ice. The early fight between the two also gave fans a preview of the physicality that was shown throughout the evening. 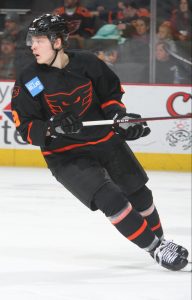 Gabriel’s jolt of energy for the Phantoms paid off as just a few minutes later forward Matthew Strome picked up his first professional goal on the power play, deflecting a T.J Brennan slap shot past Penguins goalie Emil Larmi. While it’s’ his first professional goal, Strome is no stranger to scoring goals as he scored 115 goals during his junior hockey career with the Hamilton Bulldogs.

The Phantoms extended that lead just 21 seconds later when Pascal Laberge picked up a rebound off Larmi and deposited into the net for the Phantoms second goal of the game. Carsen Twarynski and Mark Friedman both earned assists on the goal. For Twarynski it was his first point for the Phantoms this season after starting the season with the Philadelphia Flyers. For Friedman, the assist marked his fifth of the season.

Before the 10 minute mark of the first period, the Phantoms extended their lead to 3-0 as Twarynski recorded his second point of the night when he beat Larmi glove side, roofing a laser shot from the right circle. The goal was Twarynski’s first of the year with Lehigh Valley, although he scored one with the Flyers. 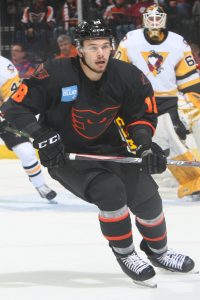 Lehigh Valley wasn’t finished just yet as the kept their incredible first period going when at the 16:31 mark, Carsen Twarynski picked up his second goal of the game and third point of the first period. The third-year Phantom was on the receiving end of a perfect behind the back pass from defenseman Mark Friedman before beating Larmi in similar fashion to his first goal, pinpointing a wrist shot from the left circle to extend the Phantoms lead to 4-0.

Phantoms goalie J-F Berube matched the strong play of the Phantoms offense in Friday night’s first period, stopping all 14 shots that the Penguins sent his way.

The second period of Friday night’s affair was a quieter period overall, with the two rivals exchanging goals in the period. The Phantoms scored first in the period, extending their lead to 5-0 when forward Isaac Ratcliffe scored his second goal of the season, deflecting an Andy Welinksi shot past Larmi. The Penguins, however, did find the back of the net before the end of the period when Jamie Devane got one past a screened Berube to cut the Phantoms lead to 5-1. 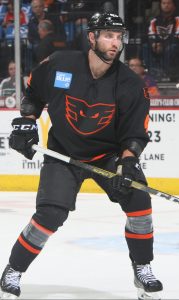 In a period that resembled the Phantoms early success in the first period, the third period belonged to Wilkes-Barre/Scranton. The Penguins in the third scored four goals, including a trio of goals in a three minute span. The Penguins climbed all the way back tie the game up with just two minutes remaining in the third period. Despite a rough period, Berube was able to settle down and make several big stops in the final two minutes to keep this game tied and send it to overtime.

In overtime, the Penguins continued the momentum they had from the third period but a delayed penalty on the Penguins and strong puck work from Nic Aube-Kubel in the corner created enough time for Phantoms defenseman T.J Brennan to grab the puck and score the game winner, giving the Phantoms a 6-5 victory. The overtime winner was Brennan’s fifth overtime goal as a Phantom, tying him with Peter White for second in franchise history, trailing only John Slaney who had six.

Stars of the Game

Next time out: The Phantoms will take on the Hartford Wolf Pack on Saturday night at 7:00 pm. The first 6,500 fans on Saturday will receive a free poster that they can get signed tomorrow night by Phantoms players following the game. Fans can buy tickets for the game, HERE