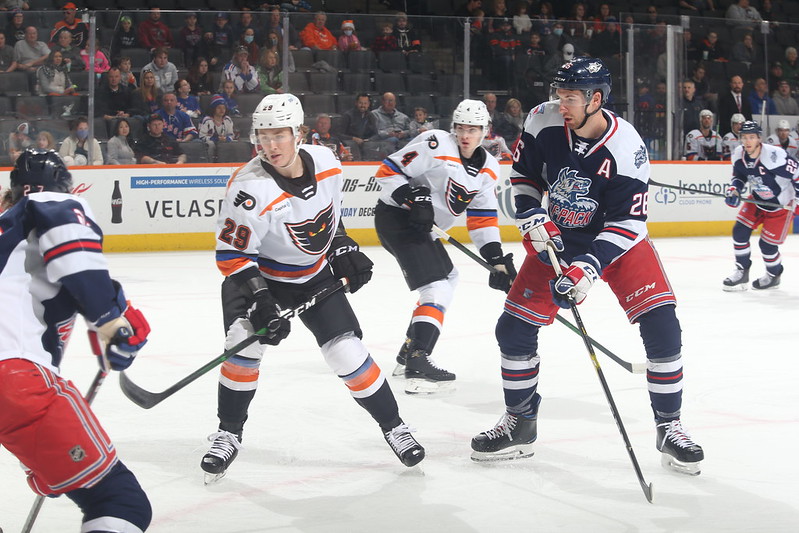 Gerry Mayhew (9th), Garrett Wilson (5th) and Isaac Ratcliffe (3rd) also scored for the Phantoms while Wade Allison added a shootout conversion of his own in the first round. Pat Nagle picked up his second win in his big weekend with 18 saves. 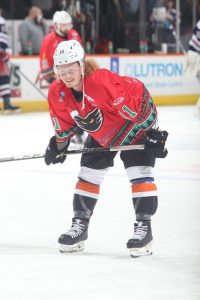 Riding the high of the emotion-driven Teddy Bear Toss Night win the evening before, the Phantom came out flying in their return engagement less than 24 hours later and posted a 14-5 shots advantage as they blitzed Hartford throughout the opening period.

Mayhew struck from the left circle with a strike to the upper-right corner past Adam Huska with 1:12 left in the first period as the Teddy Bear Goal Scorer lit the lamp for the first goal of the game for a second consecutive contest. Adam Clendening and Garrett Wilson assisted on the play which also was the team’s third power-play goal of teh weekend.

Morgan Barron blasted home his 7th of the season early in the second period to even the score for the visiting Pack.

But Lehigh Valley surged back with Garrett Wilson from the right circle on a fine assist by Jackson Cates through a mess of traffic in the slot. Cates somehow found Wilson who put the Phantoms back in front 2-1.

Hayden Hodgson got his stick etween a pair of Hartford players in the neutral zone to successfully nudge the puck over to Isaac Ratcliffe who buried a breakaway opportunity top shelf with 6:43 left in the second period for a 3-1 lead.

Hartford was on its heels and the Phantoms were on the verge of building on their lead even more. But the Wolf Pack hung in there and eventually surged back with Austin Ruschhoff on the right of the cage knocking a back-door tap-in past Nagle for a 3-2 game.

Lehigh Valley tried to cling to the one-goal game to the finish line through much of a low-event third period. But eventually Hartford came up with the equalizer after the Phantoms took their only penalty of the game. Zac Jones rushed through the Phantoms penalty kill and was initially denied off the chest of Nagle on his quick breakaway opportunity. But Jones followed his own shot bouncing to the left of the crease and was able to convert for his fourth of the season to even the score at 3-3 with just 2:48 remaining.

Jackson Cates almost scored in the opening seconds of overtime as he rushed right at the Hartford net off the opening faceoff but the Wolf Pack cut off that chance. Hartford had more possession later in the overtime forcing Nagle to make four big saves in the extra frame.

Lehigh Valley had the last crack at it in the overtime period with Adam Clendening carrying across the line and to the right circle to draw Huska way out of the crease. Cal O’Reilly was open on the backdoor with practically an open net in front of him but Zac Jones got over there to get the shaft of his stick on O’Reilly puck and barely nick it upstairs just before time expired in the overtime.

Wade Allison blasted home the first shootout chance to teh stick-side of Huska. And Clenending weaved over from the right circle and connected off the far post also on the stick-side of Huska to clinch the win. In betwee were a couple of denials by Pat Nagle on the Phantoms end. One appeared to go off his pad and then off the post. And the other was a poke-check wen the Hartford forward briefly lost control.