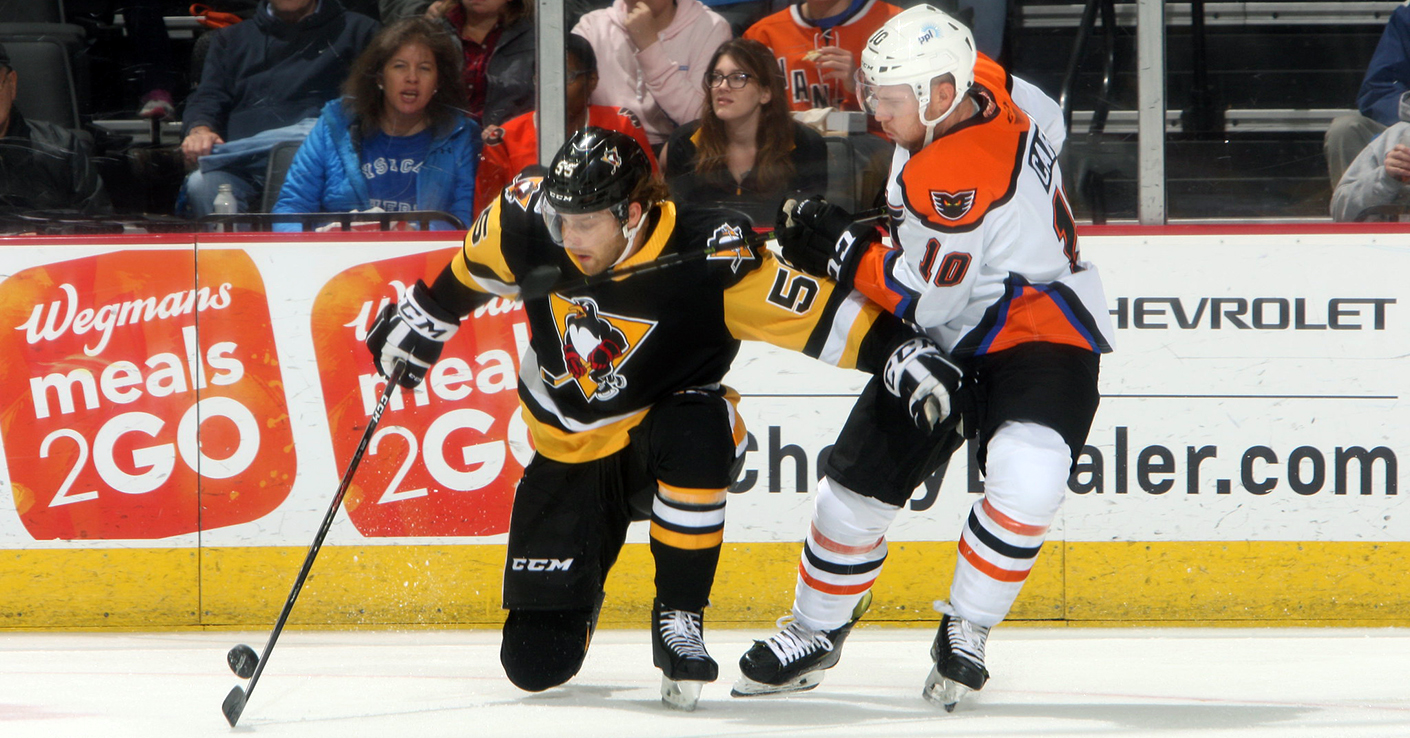 Lehigh Valley, Pa – The Lehigh Valley Phantoms (3-1-1-3) fought back to force extra time once again and earned a point in the seventh straight game on Friday night against the Wilkes-Barre/Scranton Penguins (5-4-1-0) at PPL Center in a 4-3 shootout loss. For the third time at home, and fourth this season, the game would require more than 60 minutes to find a winner as the Phantoms erased an early 3-0 Wiles-Barre/Scranton lead to send this one to a shootout.

The Penguins would strike first on Friday night when forward Sam Lafferty scored at the 14:18 mark of the first period. Just within the final minute of that first period, Stefan Noesen made it a two-goal lead for the Penguins as he scored on a breakaway goal. The Phantoms would go into the first intermission down 2-0. The Phantoms were able to get seven shots on goal in the period l but were unable to get past Wilkes-Barre/Scranton goaltender, Casey DeSmith.

In the second period, the penguins n would make it a 3-0 game when Anthony Angello knocked in a loose puck in front of the net past Lyon at the 4:49 mark of the period. The Phantoms would pick up their intensity following the third Wilkes-Barre/Scranton goal and it would pay off late in the period.

The Phantoms finally got on the board when David Kase deflected an Andy Welinski’s slapshot from near the blue line past DeSmith. The goal cut the Penguins lead to two and made it a 3-1 game. The goal is Kase’s first goal of the season while it’s Welinski’s first assist of the season. Also picking up an assist on the goal was defenseman T.J Brennan, his second of the season. 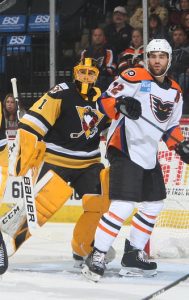 The Phantoms started the third period on the power play thanks to a David Warsofsky penalty at the end of the second period for slashing. They would take advantage of the power play as Andy Andreoff was able to capitalize on a rebound off of DeSmith right in front of the net to make it a 3-2 game. It was Andreoff’s third goal of the season while Phantoms forwards Greg Carey and Morgan Frost earned the helpers on the goal, their third and fifth of the season respectively. Morgan Frost extended his point streak to a season-high five games.

In the final minutes of the third period, the Phantoms would up their offensive pressure, continuously getting pucks on DeSmith. The offensive pressure would result in their highest shot total of any period of Friday night with 13. Their intensity would pay off with 2:01 remaining in the game when the Phantoms pulled their goalie for an extra attacker and Greg Carey was able to tie the game and secure at least a point for Lehigh Valley in seventh straight game.

In overtime, the Phantoms were able to grab several high-quality scoring chances including chances from Morgan Frost and Mikhail Vorobyev while on a power play late in the overtime period but couldn’t net the game-winner.

In the shootout, Morgan Frost gave the Phantoms a chance at the victory, but Wiles-Barre Scranton’s Stefan Noesen and Joseph Blandisi would score to win the game for the Penguins in the shootout. Despite the loss, the Phantoms earned a point for the seventh consecutive game, bringing them within one game of tying the Lehigh Valley Phantoms record of eight straight games.

Next Time Out: The Phantoms go on the road to take on the Bridgeport Sound Tigers on Saturday and Sunday. They’ll return home next Wednesday for another matchup against the Wilkes-Barre/Scranton Penguins as we will honor our nations heroes Military Appreciation Night.