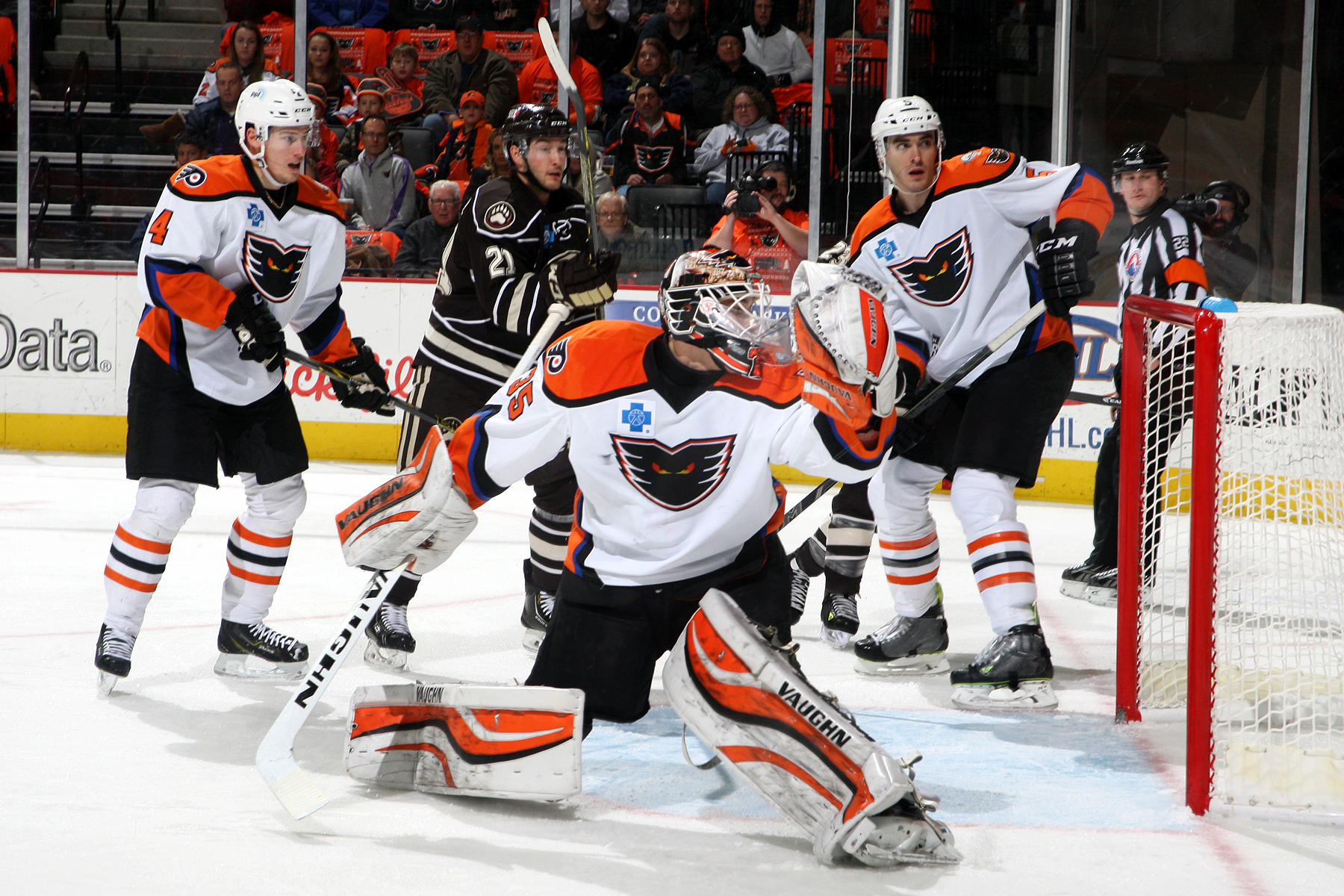 Lehigh Valley, PA – Rookie goaltender Anthony Stolarz played perhaps the best game of his professional career. And the Phantoms needed that kind of performance out of him all the way. The 20-year-old turned in a 32-save shutout for the Lehigh Valley Phantoms in a 2-0 victory over the rival Hershey Bears on Friday night at PPL Center.

Jason Akeson scored twice for the Phantoms including a shorthanded breakaway in the second period and then an empty-netter with just one second remaining.

The Phantoms struggled out of the gate in a sluggish start that saw the team out shot in the first period 16-1. And Anthony Stolarz was there to meet each one of the Bears’ quality drives and keep his team in the game.

“Stolarz was really good,” said head coach Terry Murray. “He was good throughout the game but he was really good in the first. He’s the reason why we won the game. It’s his game from the start right through to the end.”

The blanking was the second in the young career of Stolarz. But the resident of Jackson, NJ didn’t face as much pressure down the stretch in his November 21 shutout of the Worcester Sharks when the Phantoms prevailed more comfortably 4-0. That result was already decided well before the end of that game. This one was a 1-0 nail-biter down to the wire. But Stolarz likes the action.

“When I get a lot of shots I think that’s when I’m at my best,” Stolarz said. “It keeps me mentally focused. It keeps you sharp throughout the game. There was kind of a lull in the second period when we kind of took it to them. We really picked it up in the second half of the game and we’d like to carry that over to (Saturday vs. Hartford) as well.”

The win was the Phantoms second in a row and extends the team’s point streak to four games (3-0-1). Lehigh Valley improved to 13-10-4 overall and moved to within one point of Hershey in the standings and the 8th place position in the Eastern Conference. Actually, with one game-in-hand on the Bears, Lehigh Valley is actually ahead of Hershey with the eighth-best win percentage in the conference. The team has another opportunity to continue their climb up the standings against a team just above them when they travel to Hartford, Conn. for a 5:00 game on Saturday against the Wolf Pack. 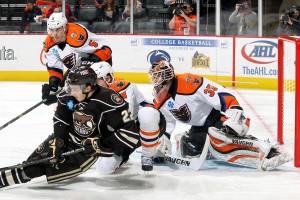 Another Standing-Room Only Sellout was on hand to boost Stolarz onto victory yet again with 8.481 fans taking part in the team’s sixth PPL Center sellout in 14 home games. The game was also the team’s ninth crowd of 8,000 or more in their new venue where the tremendous fan support has helped lift the squad to an impressive mark of 9-2-3 in home games.

This one against Hershey felt eerily reminiscent of Stolarz’ brilliant performance last Saturday against Wilkes-Barre/Scranton and it must have felt like deva-vu all over again for the big 6’6″ tall crease-patroller. In that one last week, Stolarz was trying to similarly preserve a 1-0 lead all the way to the finish line. But the Penguins just kept coming and coming and finally their 40th shot of the game with just 2:08 left was able to earn the visitors the equalizer before Lehigh Valley would eventually prevail in the shootout. Stolarz made a Lehigh Valley record 44 saves in that one.

Against Hershey, Stolarz made one fine save after another and also received a little puck-luck in the form of a couple of post-shot blasts from 19-year-old talent Andre Burakovsky making his NHL debut after the first-rounder was sent down from the Washington Capitals.

“In the first period for them to have 16 shots and then go into the second period 0-0, I think we were very fortunate,” said Stolarz. ” But we knew that we have to be better and we just kind of turned it up from there.”

When the Phantoms caught their big break back the other way, they jumped on it. Brett Hextall’s interception at center triggered a clean breakaway for Jason Akeson who buried his drive past the left skate of Hershey goalie Phillipp Grubuer at 10:50 into the second period. At that point, it was only the Phantoms third shot on goal for the game against 21 drives for the Bears. But the Phantoms’ ability to take advantage of that one costly Hershey mistake would prove to be the difference. Akeson later chased down a long clear with time winding down for his second goal of the night just before time would have expired.

Akeson has five goals in 10 games since joining the Phantoms from the Philadelphia Flyers on November 29. And he now has 63 goals all-time with the Phantoms franchise as he inches his way up towards the Top 10 in team history. Boyd Kane with 67 currently holds down the #10 spot.

“He’s (Akeson) a pretty nifty guy,” Murray said. “He’s got a good sense for the offensive part of the game. He does a lot of things for us but the one thing he can do very well is put some numbers up on the board.” 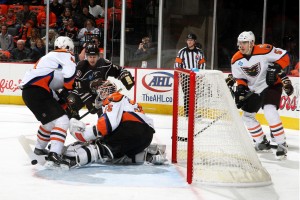 Stolarz’ best save of the night perhaps came with just over two minutes remaining in the second period when Hershey captain Dane Byers cranked up a blast from the left wing. Stolarz was going down and to his right to stay with the puck and try to be ahead of the shot. But the blast from the Bears’ winger was high and to the left of Stolarz who was able to somehow snap up his trapper and barely snag the powerful drive.

The Phantoms were being out shot 24-6 through the first two periods of play but thanks to Stolarz were able to somehow lead by a 1-0 score. The Phantoms were out shot in the game 32-18. Hershey was 0-for-3 on the power play while Lehigh Valley went 0-for-3.

The Phantoms conclude play before the Holiday Break with a 5:00 game at the Hartford Wolf Pack. With Rob Zepp recalled by Philadelphia late in the day on Saturday, the Phantoms added newcomer Matt Di Girolamo on a professional tryout contract who served as backup goalie for the day. The need for a backup came too late in the day to be able to retrieve one of the two goalies the team has with the Reading Royals of the ECHL who are on the road in Evansville, Indiana this weekend.

The Lehigh Valley Phantoms may bring in one of the goalies from Reading in time for the Saturday game in Hartford.

Lehigh Valley improved to 3-1-0 against the Hershey Bears with Game 5 of the 12-game season series slated for December 26 at Giant Center in ChocolateTown immediately upon the players’ return from the Holiday Week off.

The Phantoms’ next home game is on Saturday, December 27 against the Norfolk Admirals on Player Photograph Night with fans being allowed onto the ice after the game to meet and take pictures with their favorite Phantoms players. That will be local fans’ last chance to see the Lehigh Valley Phantoms at PPL Center for quite some time with the next home contests after that slated for January 16 and 17.

For tickets to upcoming Phantoms games including the big 2014 home finale on December 27, please call 610-347-TIXX (8499) or purchase online at pplcenter.com or at the Mealey’s Furniture Box Office at the Tim Horton’s entrance of PPL Center.