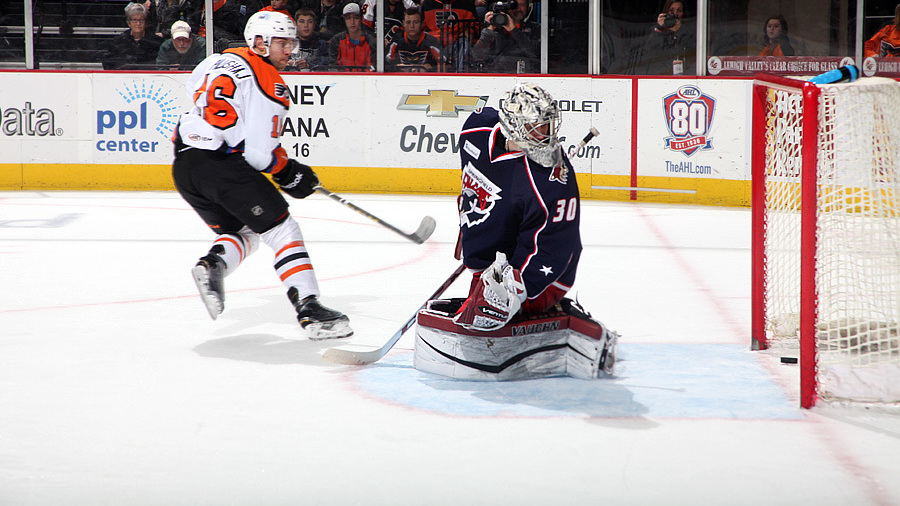 Lehigh Valley, PA – All-Star goaltender Anthony Stolarz registered his third-highest save total (37 saves) of the season Friday night as the Lehigh Valley Phantoms doubled up the Springfield Falcons 2-1 in front of 8,513 fans at PPL Center. Cole Bardreau (8th goal) and Aaron Palushaj (10th goal) provided the offense for Lehigh Valley as the Phantoms garnered their seventh win over the team’s last 11 games overall. 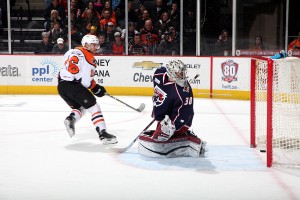 With the win, the Phantoms improved to 24-25-3 this season and are now 2-2 through the first four games of the team’s season-high five-game home stand. Lehigh Valley has now won four of its last six games in downtown Allentown and wraps up its current five-game home stretch tomorrow, Saturday, February 20 in a rivalry showdown with the Bridgeport Sound Tigers.

Friday’s contest was the third of four total meetings during the 2015-2016 regular season between Lehigh Valley and Springfield as the Phantoms improved to 3-0 against the Falcons. Lehigh Valley has now outscored Springfield 11-6 through the first three collisions.

Stolarz was in all-star form all night long as the second-year netminder recorded double-digit saves in each period Friday evening. After 12 first period denials, he turned aside each of Springfield’s 15 offerings in the middle frame before recording 10 third period saves in sealing the Phantoms triumph. With the win, Stolarz improved to 16-11-3 overall this year. 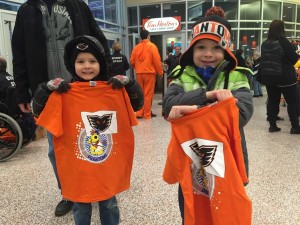 Petr Straka also chipped in a pair of assists for the Phantoms as the third-year winger produced his seventh multi-point outing this season.

Special teams played a big part in the winning effort as Lehigh Valley went 1-for-5 on the power play while the Phantoms’ penalty kill kept Springfield’s man advantage off the board in five opportunities. Lehigh Valley’s power play has now produced 14 man-advantage markers over the team’s last 11 games going an impressive 14-for-57 (24.6 percent) during that stretch. Meanwhile, the Phantoms now haven’t surrendered a power play goal in any of the team’s last four consecutive contests.

Friday’s crowd of 8,513 raucous spectators produced the 14th standing room-only sellout at PPL Center this season. And fans made sure to arrive early in order to take advantage of the youth t-shirt giveaway, which offered a free meLVin-inspired t-shirt to fans 14 and under.

Springfield fired the game’s opening salvo just past the midway point of the first period when, after a takeaway in the offensive zone, Greg Carey broke in down the slot before firing home his team-leading 21st goal of the season. The unassisted even-strength strike came 10:50 into the opening period of play. 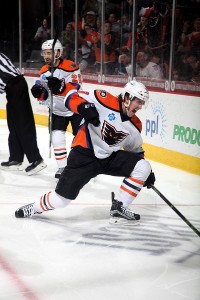 The Phantoms nearly leveled the contest just moments later when Bardreau came darting out of the penalty box and was hit in stride at center ice by a perfect stretch pass only to see his snap shot from atop the goal crease sail just over the upper right-hand corner of the Falcons cage.

Lehigh Valley remained resilient though and the second time was the charm for Bardreau as he was able to even the tilt just over two minutes into the second period. In the midst of the Phantoms’ second power play of the evening, the first-year center from Fairport, New York won a battle for a loose puck within the Springfield crease before jamming in his eighth goal of the season. Straka and Chris Conner assisted on the man-advantage marker netted 2:19 into the middle frame.

With an assist on Lehigh Valley’s opening conversion, Conner remained red hot offensively. The 32-year-old winger has now registered at least one point in 12 of his last 13 games and has recorded 18 points (7 goals, 11 assists) overall during his recent surge. What’s more, Conner extended his home scoring streak to eight games having produced five goals, five assists and 10 points over the team’s last eight games at PPL Center.

The Phantoms then grabbed the lead for good with just under three minutes remaining in the second stanza when a brilliant takeaway by Straka in neutral ice produced a breakaway for Palushaj who deftly went to the backhand before sliding home his 10th goal of the season. Straka garnered the only assist on the go-ahead conversion tallied 17:41 into the middle period.

The Phantoms wrap up their season-high five-game home stand on Saturday, February 20 when they welcome the Bridgeport Sound Tigers, the AHL affiliate of the New York Islanders, to PPL Center. A limited number of tickets remain to Saturday’s highly-anticipated showdown so be sure to secure yours now at pplcenter.com, by calling 610-347-TIXX [8499] or in person at the Mealey’s Furniture Box Office at PPL Center [701 Hamilton Street].