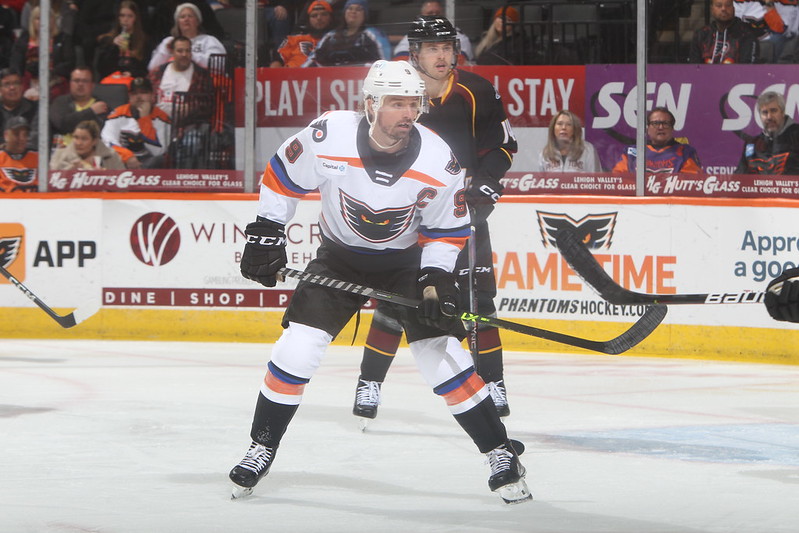 Lehigh Valley, PA – The first goal of the season for Cal O’Reilly tied the Phantoms’ home opening contest with just 62 seconds remaining but Emil Bemstrom put visiting Cleveland into the winners’ circle with his second goal of the game as the Monsters prevailed with a 4-3 overtime decision on Saturday at PPL Center.

Elliot Desnoyers scored for a third consecutive game to begin his pro career and Hayden Hodgson lit the lamp for the team’s first goal at PPL Center this season while the 101st sellout crowd in Lehigh Valley Phantoms history rocked the house and waved their rally towels and received free t-shirts from Superfan Cameron Hughes in a massive celebration marking the beginning of the Phantoms’ season.

The Phantoms have played three consecutive nailbiting one-goal games to begin the season, two of which have gone to overtime.

Lehigh Valley (1-1-1) came out flying to begin the game and with a 7-2 shots advantage. While Adam Ginning was delivering a big hit at center, Garrett Wilson crashed his way forward to set up Hayden Hodgson from the right circle who blasted his first goal of the season past Cleveland netminder Pavel Cajan at 7:13 into the contest for a 1-0 lead. 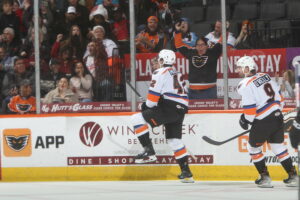 Hodgson joins the likes of Max Willman, Zayde Wisdom, Greg Carey, Danick Martel and Scott Laughton among those to have scored the team’s first PPL Center goal of the season.

Cleveland pushed back just barely more than three minutes later with Brendan Gaunce (2nd) knocking in the rebound of a Kirill Marchenko shot to beat Sam Ersson and forge a 1-1 tie.

Lehigh Valley re-took the lead on yet another goal for talented 20-year-old rookie Elliot Desnoyers with 8:03 remaining in the second period. His third straight game scoring a goal came as the result of a sharp-angle top-shelf backhander from the left of the cage in which the Philadelphia fifth-round selection in 2020 once again showed his impressive hands. Fellow prospects Tyson Foerster and Cam York assisted on the Desnoyers tally to give the Phantoms a 2-1 lead at the end of two.

But visiting Cleveland (3-1-0) rallied in the third period with a Justin Richards (1st) goal knotting the score just 1:41 into the final frame. Then it was Emil Bemstrom (3rd) from the left circle beating Sam Ersson with a power-play goal with just 8:26 left to give the Monsters their first lead of the night.  2022 First-rounder and #6 overall draft selection David Jiricek assisted on the tying tally for the Columbus affiliate. 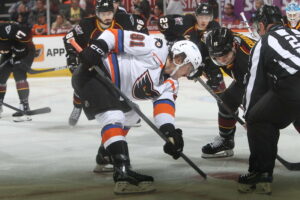 Lehigh Valley found the equalizer that earned them a standings point with just 1:02 left. Tyson Foerster knocked the puck back to Ronnie Attard on right point who cranked up a big one-timer that sent the Monsters scrambling. Olle Lycksell had a close call down low that was knocked away but Cal O’Reilly saw an opportunity from the right of the cage behind the left skate of Cajan and deposited his first of the season. The 6-on-5 extra-attacker tally tied the game at 3-3 and ultimately sent the Phantoms to their second overtime game of the campaign.

But Cleveland won the opening faceoff in overtime and didn’t surrender the puck. Gavin Bayreuther connected up ice with Bemstrom who made a nice dangle through the left circle to navigate towards the goal and beat Ersson to the far post for the game-winner just 42 seconds into the extra period.

Both teams were 1-for-3 on the power play. Cleveland barely outshot the Phantoms 31-30. Lehigh Valley and Cleveland rematch on Sunday afternoon at 3:05 p.m. at PPL Center featuring postgame photos with the Phantoms players on the ice after the game. Tickets are available at PPLCenter.com

Opening Weekend at PPL Center continues Sunday, October 23 at 3:05 p.m.  against the Cleveland Monsters featuring the return of fan-interaction activities with a postgame photo session with the players on the ice.