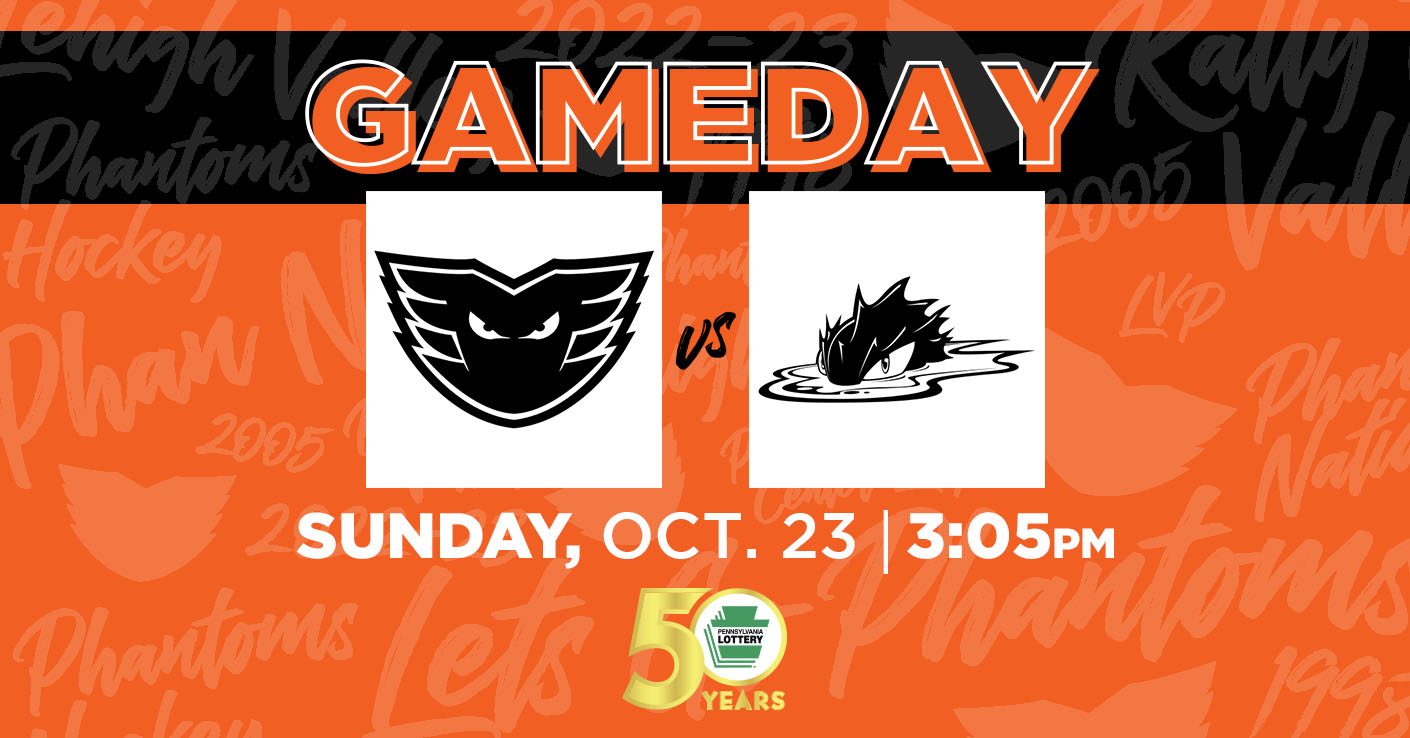 TODAY – It’s an Opening Weekend rematch at PPL Center with the Lehigh Phantoms and Cleveland Monsters concluding their two-game weekend series in a 3:05 p.m. matinee. The Monsters are the AHL affiliate of the Columbus Blue Jackets.

Lehigh Valley is now 5-3-1 all-time in home openers and the Phantoms franchise is 18-7-2 in debuts on home ice since the beginning of the Philadelphia Phantoms in 1996.

LAST TIME – Cal O’Reilly scored the tying goal with just 62 seconds remaining but Emil Bemstrom’s second goal of the game was the overtime winner for the Cleveland Monsters.

Elliot Desnoyers scored for a third consecutive game to begin his pro career and Hayden Hodgson lit the lamp in the first period for the team’s first PPL Center goal of the season. The physical and feisty game featured exciting back-and-forth action and good chances for both sides.

SELLOUT CITY! – Last night marked the 101st sellout all-time for the Lehigh Valley Phantoms and team’s first since the COVID pandemic. Lehigh Valley’s last sellout game was March 8, 2020 against the Bridgeport Sound Tigers in the second-to-last game before the league was shutdown and the season eventually cancelled due to the pandemic.
Thank You, Phantoms PHANS!!! You were amazing!! The crowd was buzzing and electric and LOUD throughout the night!

THE DESTROYER – Elliot Desnoyers has a three-game goal streak to begin his pro career. The 20-year-old rookie was a Round 5 selection of the Philadelphia Flyers in 2020 and is coming off a huge breakout season with the Halifax Mooseheads in the QMJHL where he scored 42 goals.
Last night, Desnoyers scored from the side of the net on a sharp angle with an elevated backhander on the power play. Last weekend, his first career pro goal at Wilkes-Barre/Scranton came as he got off a quick shot in the slot following some forecheck work by Garrett Wilson and Zack MacEwen. The following day, he impressively sped past the Hershey defense and protected the puck for a nifty breakaway goal.
Elliot’s father was longtime teammates with Phantoms head coach Ian Laperriere when they were kids growing up in the Montreal area!

CAPTAIN CAL – 36-year-old Cal O’Reilly continues to produce. Now at eighth all-time in career assists in the AHL with 535, O’Reilly has found a greater scoring touch late in his career. Last night, O’Reilly scored his first goal of the season to tie the game with just 62 seconds left. Last year, Cal’s 21 goals was a new career high for him eclipsing the 18 goals he had scored 15 years earlier as a 20-year-old rookie with the Milwaukee Admirals. Cal is the active scoring leader in the AHL with 687 points in a Hall-of-Fame caliber career that has spanned over 1,000 pro games.

ABOUT CLEVELAND – This isn’t the same Monsters team you’re used to. New head coach Trent Vogelhuber has his Cleveland contingent flying and playing at a high pace. The Monsters are second in the Eastern Conference at 4.25 goals per game.
First-rounder David Jiricek from the Czech Republic was the #6 overall selection in the 2022 draft and is only 18 years old. Kirill Marchenko was a Round 2 pick of the Blue Jackets in 2018 and already has 4 goals in his North American rookie season. Emil Bemstrom had the go-ahead goal in the third period and then the winning goal in overtime against Lehigh Valley and boasts 117 games of NHL experience.
The Monsters have the worst penalty kill in the league giving up 6 out of 14 so far for 57.1%. This is Cleveland’s only visit to PPL Center this season.
Lehigh Valley and Cleveland will reamtch for a pair of games in Northeast Ohio in January.

UP NEXT – The four-game homestand continues on Friday, October 28 and Saturday, October 29 with the Wilkes-Barre/Scranton Penguins and Bridgeport Islanders visiting PPL Center back-to-back. Haunted on Hamilton Weekend will feature a Halloween theme. Wear your customers! Face-painting, candy, and even a Halloween Parade on the ice for the kids during the first intermission of Saturday’s game!