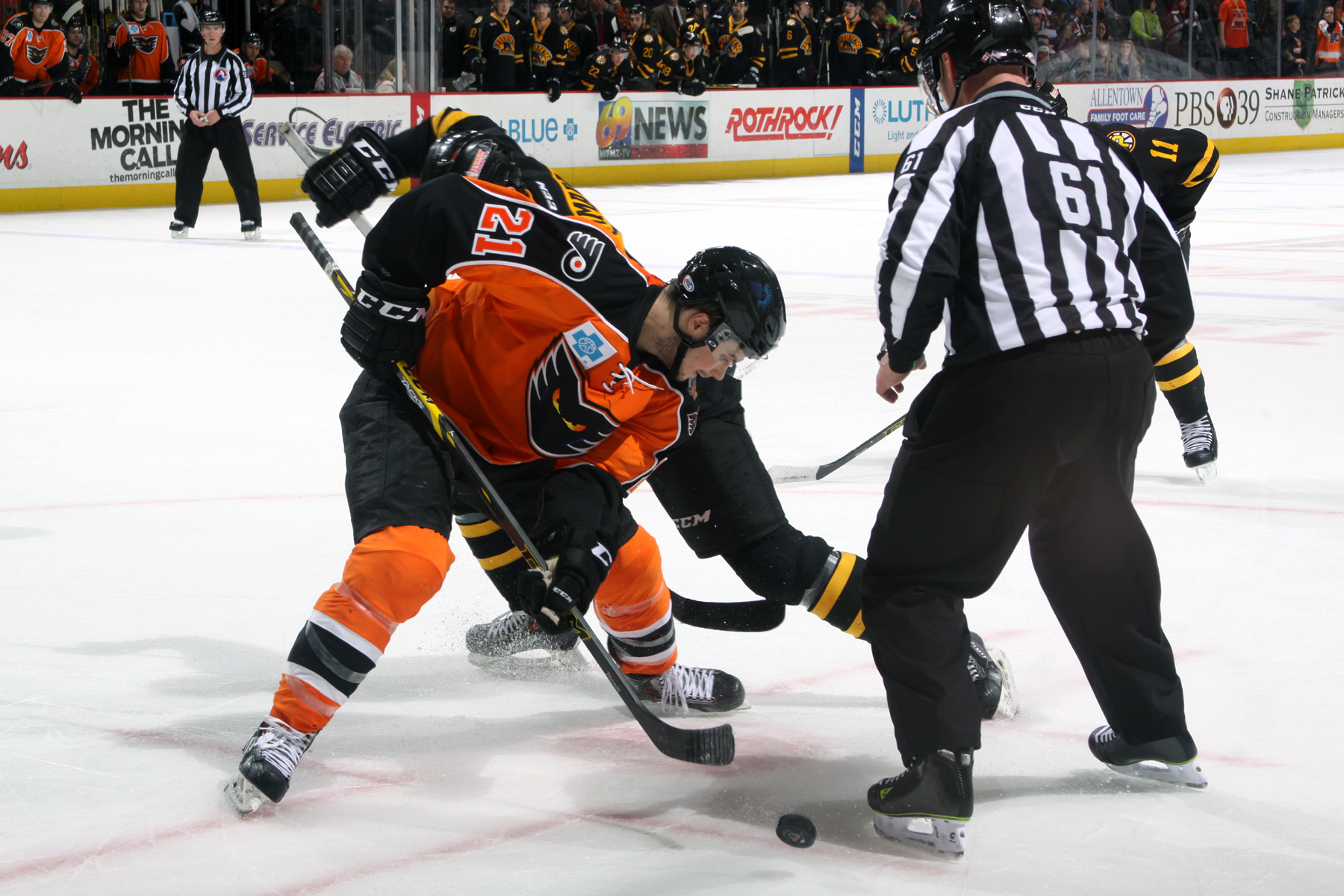 Providence, RI – Rookie Scott Laughton scored in the third round of the shootout for the Lehigh Valley Phantoms who prevailed at Providence 2-1 on Friday night. Rob Zepp stole the show with 33 saves to hold off the Bruins’ attack. Lehigh Valley ended an 11-game home-ice win streak for Providence who had not lost at the Dunkin Donuts Center in over two months.

Adam Comrie scored a huge goal for the Phantoms late in the first period on his 5-on-3 power-play blast that knocked the water bottle with just 1.1 seconds showing on the clock. His tally came just a couple of minutes after a Colin Stuart deflection goal of a Steve Eminger shot on a Providence power play.

It was the 20th game of the season to be decided in overtime or shootout for the Phantoms, 2nd most in the AHL trailing only the St. John’s IceCaps who played past regulation on 21 occasions. The Phantoms are now 6-1 in shootouts and are 13-7 overall when tied at the end of 60 minutes (including a 7-6 record in overtime verdicts). More recently, the Phantoms have had even more frequent late-night dramatics having now gone to overtime or shootout in eight out of the last 13 contests.

Lehigh Valley is 2-0 in the early proceedings of their five-game away-swing and now appear to be road warriors as well with a stellar 5-1 performance in their last six occasions away from home. The Phantoms are an impressive 10-4 on the road since the calendar turned to 2015.

The Bruins raced off to a quick start in the game with a 6-0 shots advantage but Zepp was ready from the start and made several fine stops. Eventually, the Phantoms defense would buckle down and would limit the Bruins chances as the game seemed to be clogged up in various stretches without as much action. The Phantoms had a tough time getting their offense going through much of the night with a season-low 17 shots on goal in regulation including only six shots in the first and then just four drives in the second period.

Everything changed late in the third as the pace picked up. The Phantoms seemed to have finally worn down the tenacious guarding of the Providence Bruins with Lehigh Valley pushing on some of their best chances. Somehow the game would remain without any further scoring leading to yet another opportunity for overtime heroism.

Jason Akeson almost scored his second overtime goal in about a week but his drive clanged off the iron and away.

Scott Laughton’s score at the beginning of the third period was the only conversion for either side. Rookie talent Alexander Khoklachev had an opportunity to equalize in the third period but, after inducing Rob Zepp to commit and go down, his drive rang off the post to secure the Phantoms’ victory.

Lehigh Valley improved to 28-24-7 overall with 63 points in their efforts to claw their way back into playoff positioning in the stretch run of the 2014-15 regular season. The Providence Bruins moved to 32-20-9 with the conclusion of their five-game win streak and 11-game home-ice win streak.

The Bruins outshot the Phantoms 34-22. Both teams finished 1-for-3 on the power play. Lehigh Valley finished the season series with Providence with a 1-1 mark.

The Phantoms’ five-game road-swing continues Saturday at the Bridgeport Sound Tigers. Be sure to catch each of Lehigh Valley’s next five games on Fox 1470 AM, online at www.fox1470.com or via the iHeartRadio app. Coverage begins at 6:20 p.m. with the Nazareth Pallet Countdown to Faceoff. Next week, the Phantoms are at the Hartford Wolf Pack and Worcester Sharks on Friday and Saturday in a pair of key Eastern Conference playoff-hopeful showdowns.

The Phantoms return to downtown Allentown on Sunday, March 22nd at 5:05 p.m. when they welcome the Wilkes-Barre/Scranton Penguins to town for another Pennsylvania rivalry encounter. Sunday’s contest features a FREE youth street hockey stick giveaway for the first 3,000 kids in attendance ages 14 and under. A limited number of tickets for Lehigh Valley’s next home game are available now at pplcenter.com, by calling 610-347-TIXX (8499) or in person at the Mealey’s Furniture Box Office at PPL Center (701 Hamilton).