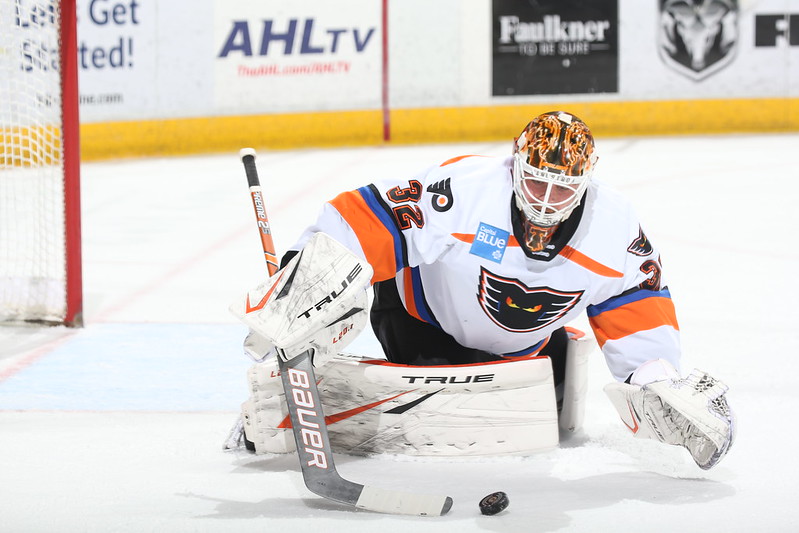 Hershey, PA – Goalie Felix Sandström had his third consecutive stellar outing and this time racked up a season-high 40 saves in holding off the Hershey Bears and giving the Phantoms a chance. But Hershey netminder Hunter Sheppard was also strong in his AHL debut in shutting down the Phantoms 2-0 on Sunday afternoon at Giant Center.

It was the first time Lehigh Valley (15-6-4) has been shut out this season and also the first time the Phantoms have lost consecutive games in regulation.  Brett Leason (7th) scored almost exactly midway through the game for the only tally against Sandström. The Bears later sealed the victory with an empty-net goal by Axel Jonsson-Fjallby. 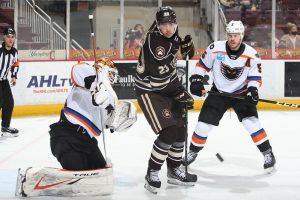 Sandström has been outstanding in his last three games with 37 saves, 32 saves and 40 saves respectively. His 109 saves on 114 shots in the past eight days is good for a .956 save percentage for the suddenly surging second-year pro in North America who has found his stride now that he has a regular opportunity to play. The Flyers third-round selection in 2015 had long gaps between games through this season due to various COVID protocol situations with the Flyers and the Phantoms as well as his own injury situation.

The Phantoms went 0-for-6 on the power play including 0-for-2 in the second period. The two rivals engaged in several skirmishes and scraps befitting the storied rivalry between the Pennsylvania foes.

Lehigh Valley was not bereft of chances although at the start of the game they were hard to come by. Hershey raced out to a 10-1 shots advantage to begin that eventually stretched to 17-2. But Felix Sandström kept the Phantoms right thee with the Bears for a 0-0 deadlock after one.

Hershey continued the pressure to begin the second period and benefitted from an early power play as they extended their shots count to 25-4. But the score remained 0-0 while the Phantoms found their stride.

Hershey’s Shane Gersich won a faceoff in the Phantoms zone leading to Leason moving left to right across the slot to score to the upper-left corner on the stick-side of Sandström for a 1-0 lead at 9:58 into the second period. 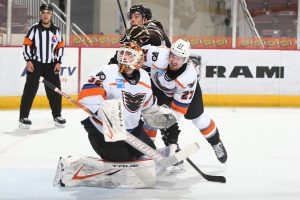 Chris Mueller, Connor Bunnaman and Isaac Ratcliffe were among those with some chances right at the net-front for the Phantoms but they couldn’t break through on Sheppard.

Late in the third period, Tyson Foerster cranked up a one-timer that knocked the paddle airborne out of the hands of Sheppard but he got enough of the drive to keep the Phantoms ahead.

The Phantoms offense was stronger in the third period but the Bears held on and eventually found the empty-net to seal the win for the University of Minnesota-Duluth product in his first-ever game in Hershey since his call-up from South Carolina of the ECHL.

The Phantoms are 5-4-0 against Hershey this season. The game was the first of three straight between the Phantoms and Bears in a series which will continue on Wednesday night at PPL Center and then conclude on Saturday afternoon back at Hershey to also put a wrap on the season series.

Sunday marked the first time the Phantoms had been shut out since January 3, 2020 at Laval.

The Phantoms return to PPL Center on Wednesday night hosting Hershey and will be back again on Mothers’ Day, Sunday, May 9, for a 3:05 p.m. clash against the Wilkes-Barre/Scranton Penguins.

.Just six games remain in the 2021 regular season including only four games left at home. Tickets for our remaining Phantoms contests at PPL Center are available HERE