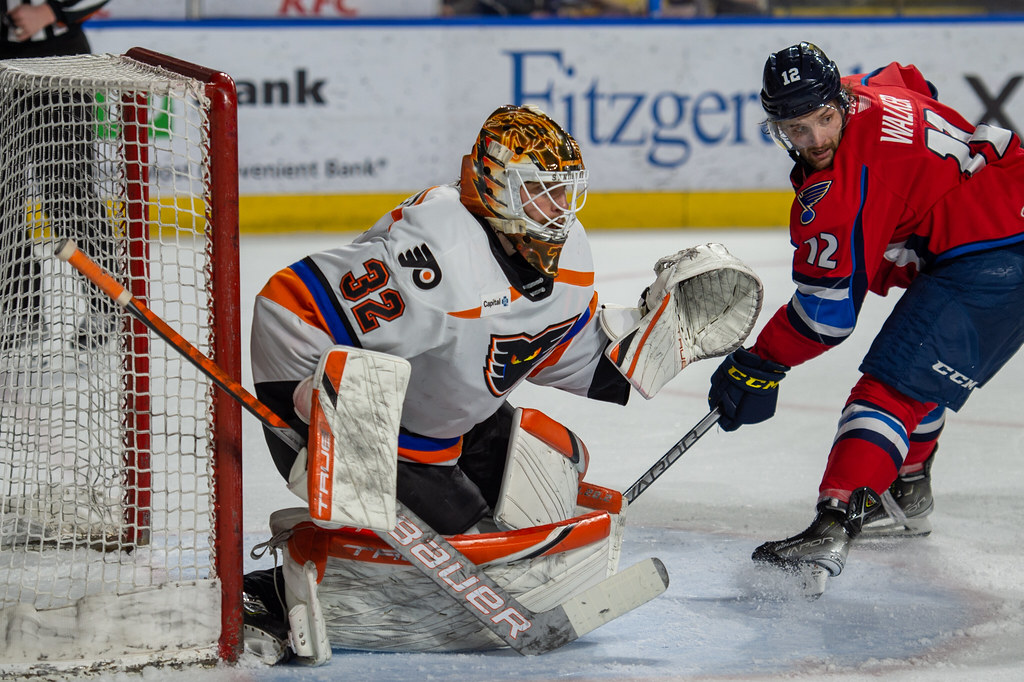 Phantoms Kill 5:30 of Extra-Attacker Push to Hold Off T-Birds

Springfield, MA – Felix Sandstrom allowed a 2-on-1 goal on the first shot he saw and then turned aside 32 in a row after that in leading the Phantoms to an exciting 3-1 victory at the first-place Springfield Thunderbirds on Friday night.

Adam Johnson (2nd), Egor Zamula (4th) and Tanner Laczynski (3rd) all scored in the second period for Lehigh Valley. Springfield  was held to 0-for-6 on the power play by the stingy and scrappy Phantoms’ penalty kill.

The T-Birds had the Phantoms trapped in their zone through much of the last five-and-a-half minutes of the game with a 6-on-4 and 6-on-5 push. Springfield even hit the crossbar on a point shot by Calle Rosen with under 2:00 left. But they couldn’t break through and the Phantoms were able to hang on in the chaotic finish. Some of the Lehigh Valley defenders were on the ice for three minutes or longer, unable to get a change in Springfield’s late-game push.

St. Louis first-rounder Klim Kostin scored his first goal with the T-Birds since arriving from St. Louis burying a 2-on-1 just 2:03 into the game for a 1-0 lead. The Phantoms held Springfield (32-18-7) to just five shots on goal in the first period and likely had the better of the play overall with a 9-5 shots advantage but the T-Birds went to the dressing room with the advantage on the scoreboard after 20 minutes. 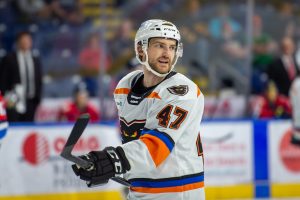 Lehigh Valley (21-25-10) converted barely over a minute into the second period to even the score when Adam Johnson would carry up the left wing on a 2-on-1 with Wade Allison. Johnson made it inside the left dot when he decided to shoot the puck himself spotting the open upper-right corner past the glove of Joel Hofer to get the Phantoms on the board.

It was the second of the year for the former Wilkes-Barre/Scranton Penguins standout but it was Johnson’s first with the Phantoms. He had scored earlier this year as a member of the Ontario (Cal.) Reign before coming to the Phantoms in a trade for future considerations.

Lehigh Valley would score again with under eight minutes left in the second period when Matt Strome entered on a bit of a 2-on-1 with Linus Sandin. Strome’s attempt from the left circle to connect with his teammate in the slot was blocked by a diving defender for the Thunderbirds. But a fortuitous bounce set up a trailing Egor Zamula who was ready to pull the trigger and power through his fourth of the season for a 2-1 lead.

The Phantoms gave themselves a little more breathing room with 1:03 remaining in the second period when Adam Clendening’s shot/pass from right point was deflected in the high slot on the backhand for Tanner Laczynski who flipped the puck to the stick side of Hofer for the 3-1 advantage.

Springfield out shot the Phantoms in the second perriod by a 14-8 margin but Sandstrom was magnificent with several impressive stops while the Phantoms successfully made the most of their chances. 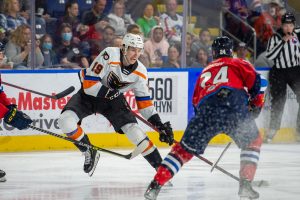 Lehigh Valley killed a power play at the end of the second into the beginning of the third period. And then killed another one midway through the third.

But the kill at the end was the most impressive. A pulled goalie for an extra attacker with 5:30 left provided the Thunderbirds with a  6-on-4 attack. And even after the Phantoms received a player back to make it 6-on-5 they were still stuck in their zone with several players unable to make it over to the bench for a change.

Calle Rosen blasted a center-point drive off the crossbar with 1:55 left that bounced straight down and BEHIND Sandstrom but somehow the defenders on the scene tied up enough sticks and were able to maneuver the puck away to prevent the Thunderbirds from scoring.

The Phantoms are 1-1-0 so far on their six-game road swing which is their longest stretch of consecutive away games this season. There are 20 games remaining in the regular season.

Lehigh Valley has gone 3-1-0 in its last four games. The Phantoms will look forward to the opportunity to do it again on Saturday in a rematch at MassMutual Center in Springfield.