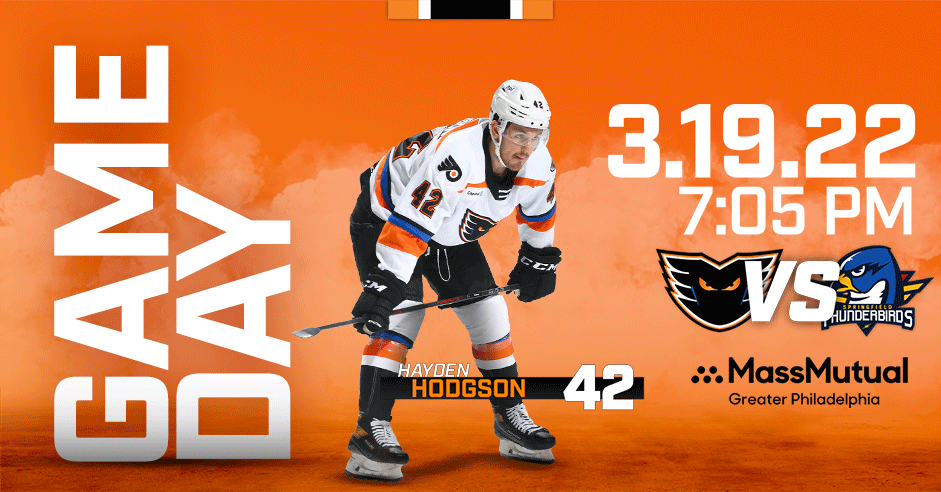 TONIGHT
It’s a GAMEDAY presented by MassMutual as the Lehigh Valley Phantoms looks to sweep their weekend series at the Springfield Thunderbirds, AHL affiliate of the St. Louis Blues.
Lehigh Valley (21-25-10) is playing Game 3 of a six-game road swing. This is Game 57 of the season and there are 210remaining including tonight.
Springfield (32-18-7) is in first place in the Atlantic Division and has gone 9-5-1 in its last 15 games following last night’s loss to the Phantoms.

LAST TIME
Felix Sandstrom was tremendous with 32 saves and the Phantoms penalty kill came through with clutch stops in a 3-1 win at Springfield on Friday night. The Phantoms had to kill five-and-a-half minutes of extra-attacker hockey at the end with Springfield enjoying a 6-on-4 and 6-on-5 advantage. Some of the Phantoms players were stuck on the ice for over three minutes and unable to change but the team pushed through. Adam Jonson (2nd), Egor Zamula (4th) and Tanner Laczynski (3rd) scored in a second-period burst for the Phantoms. Sandstrom gave up a goal just over two minutes into the game but then made 32 straight stops after that.

RECENT TRANSACTIONS
Tyson Foerster was loaned to the Barrie Colts of the OHL. He has been out of action since shoulder surgery in November but has been practicing with the Phantoms for several weeks.
Ryan Fitzgerald was activated from injured reserve with Philadelphia and waived by the Flyers. He could be loaned to the Phantoms later today. Fitzgerald had hip surgery in September during Flyers training camp.
Max Willman was recalled to the Philadelphia Flyers on Wednesday after a quick three-game return to the Phantoms last weekend.

SPRINGFIELD THUNDERBIRDS
Springfield (32-18-7) is tops in the Atlantic Division with 71 points. The fast-paced T-Birds crank up 33.5 shots per game, most in the Eastern Conference and third in the AHL. They also boast a power play with a 21.6% conversion rate which is second-best in the Eastern Conference but the Phantoms held them to 0-for-6 on Friday. Veterans Matthew Peca (19-29-48) and Sam Anas (15-31-46) are the team’s scoring leaders. Peca had the overtime winner against Bridgeport on Wednesday. 34-year-old NHL beteran James Neal had his six-game point streak snapped. Neal has scored 9-6-15 in just 12 games with the Thunderbirds. He has scored 296 NHL goals primarily for Dallas, Pittsburgh and Nashville.

News and Notes
– Cal O’Reilly is currently at 997 pro games (AHL, NHL, KHL combined) and is projected to play in his 1,000th pro game on March 25 at Laval. Two weeks ago, he became the 41st player to reach 800 AHL games.
– Cal O’Reilly has 16 goals this season and the 35-year-old captain of the Phantoms is on pace to set a new personal best for goals in a season. He had 18 goals in 2006-07 as a 20-year-old rookie with the Milwaukee Admirals. Cal had three goals last weekend.
– Wade Allison had his unusual 4-game goal streak snapped on Friday but recorded an assist so now has a long five-game point streak that stretches back to January. He had lamplighters in Phantoms games on Jan 14, Jan 15, Jan 16 and Mar 11. He missed almost two months from January through March on a recall to Philadelphia and an injury.
– The Phantoms have played 56 games and have 20 remaining in the 2021-22 regular season.
– Hayden Hodgson leads the Phantoms with 18 goals and has six goals in the last ten games as well as 12 goals in the last 20 games.
– Felix Sandstrom is 3-1-0, 1.92, .938 in his last four games since last Friday. He has allowed seven goals on 112 shots although one of the goals was a long empty-netter when he was on his way to the bench for an extra attacker on Sunday. Because Sandstrom was still on the ice when the goal was scored it is officially charged against his stats.