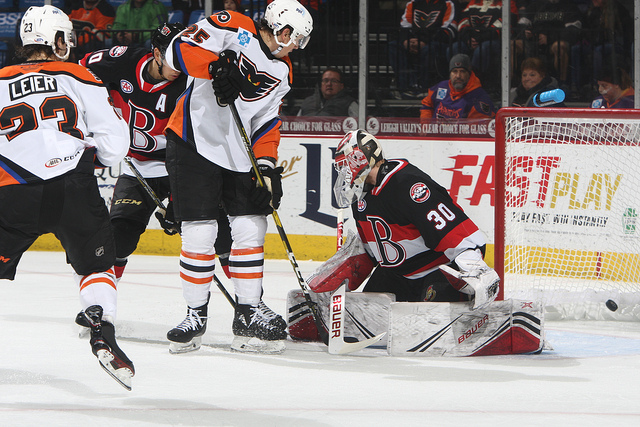 Lehigh Valley, Pa. – Carsen Twarynski enjoyed scoring a goal at PPL Center so much he decided to do it again. A pair of goals for the rookie winger, his first ever in downtown Allentown, helped propel the Lehigh Valley Phantoms to a 4-1 over the visiting Belleville Senators in the finale of a four-game homestand.

Carter Hart made 25 saves on 26 shots for his fourth consecutive victory. And Connor Bunnaman (5th) scored a power-play goal that held up as the game-winner while extending his own goal-scoring streak to three games. 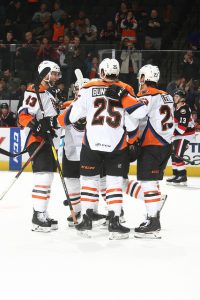 Greg Carey (13th) also scored on a power-play for the Phantoms while Chris Conner and T.J. Brennan each dished out a pair of assists for Lehigh Valley (15-8-2) who improved to 5-2 in its last seven games and 10-5 in its last 15 contests.

Belleville (12-14-2) received its lone strike from Chase Balisy (5th) in the second period to pull the Senators to within a goal but otherwise the new-look lineup of the Lehigh Valley Phantoms successfully held down the fort to sweep the season series over the Senators 2-0.

Hart has drawn attention and continued praise for his caliber of play of late. Since November 30, Hart has a four-game win streak with a 1.25 goals-against average and .957 save percentage denying 110 out of 115 shots and allowing only five goals.

The game featured a goaltending rematch of last January’s World Juniors gold medal clash in Buffalo which Carter Hart won for Canada over Filip Gustavsson of Sweden. There was also the first-ever professional match-up of the Leier cousins. Lehigh Valley’s Taylor Leier grew up as best friends with older cousin Boston Leier of the Belleville Senators and the two Leiers played against each other for the first time since they were in Major Juniors. 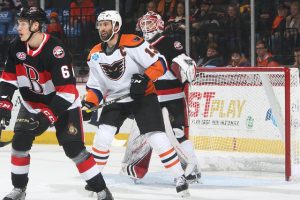 Lehigh Valley struck for a pair of power-play conversions in the game including a blast in the first period off the stick of leading scorer Greg Carey at 11:36 in. The third-year Phantom, whose 72 goals with Lehigh Valley are the most all-time, saw the rebound of his shot pop all the way back out to the slot where he offered another quick drive that beat Gustavsson for a 1-0 lead. Brennan and Conner assisted on the tally.

The Phantoms very nearly extended their lead on their next power play but Nicolas Aube-Kubel and Philippe Myers both hit the post on back to back chances about 10 seconds apart.

Taylor Leier induced consecutive penalties in the second period to set up an extended 5-on-3 for the Phantoms allowing Bunnaman to score to the far post from the lower left circle for a 2-0 advantage at 7:22 into the second. Brennan and Conner were again credited with the helpers as the surging rookie center found the back of the net for a third consecutive game.

Belleville struck on the rush at 11:31 into the frame to narrow Lehigh Valley’s lead to 2-1 when Chase Balisy finished a 3-on-2 for the first goal allowed by Carter Hart since Sunday, December 2nd at Toronto.

But Twarynski broke free on a breakaway just five minutes later and beat Gustavsson to the stick-side for his first-career goal at PPL Center. An emotionally charged Twarynski celebrated his important conversion with extra gusto after having missed earlier on a couple of great set-ups by Radel Fazleev.

The Phantoms preserved their 3-1 lead into the second intermission. Midway through the third period came a somewhat strong Senators push in efforts to cut the Phantoms’ margin back down to one. Hart made a couple of his best saves of the night and the Phantoms were on their heels somewhat. But then Fazleev found a puck around the skates of Paul Carey that he was able to poke free setting up Twarynski up the middle for the chip past Gustavsson at 10:23 for a 4-1 lead. The sequence was essentially a two-goal swing as Belleville very nearly cut the deficit to one only to see the Phantoms respond the other way in making it a three-goal lead. 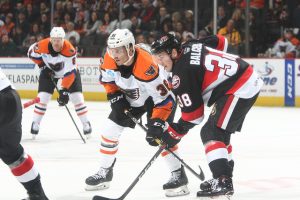 The Phantoms scored a pair of power-play goals for a second consecutive game and have now done so in nine games this season. Belleville was limited to 0-for-3 on the power play. Shots were even at 26-26.

Next up is a clash at rival Wilkes-Barre/Scranton on Saturday evening. Fans can catch the action on the Phantoms 365 app or on 790-WAEB.

The Lehigh Valley Phantoms return home on Wednesday, December 19 against the Hershey Bears and then will host the Syracuse Crunch on Friday, December 21 on Wizard Night featuring lots of Harry Potter and Hogwarts-Style fun! Tickets are available at PPLCenter.com