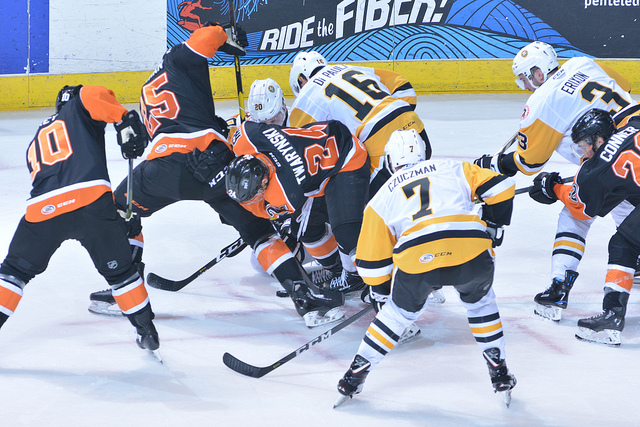 Wilkes-Barre, PA – The Phantoms’ rivalry against the Penguins lived up to the hype on Saturday night in a scrappy and intense game at Wilkes-Barre. The Penguins scored a pair of shorthanded goals and received a hat trick from Ryan Haggerty in a 5-2 win over the Phantoms in the third meeting out of 12 in the rivalry series.

A number of scraps and fights dotted the fiercely played contest including a second-period line-brawl that included former Phantoms teammates Taylor Leier and Will O’Neill dropping the gloves. Both combatants were given the boot with game misconducts for competing in a secondary altercation. O’Neill played for the Phantoms for the past two seasons before returning to Wilkes-Barre where he had previously played three years ago. 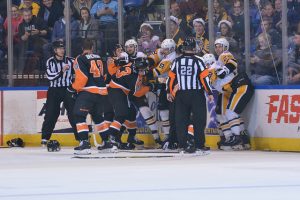 Philip Samuelsson (2nd) and Mike Vecchione (7th) scored for Lehigh Valley (15-9-2) who trailed by just one goal with under 5:00 left when they received their sixth power play of the game. But an intercept set up Sam Lafferty to score a key goal from the left circle off the underside of the crossbar for a 4-2 lead which eventually led to Haggerty’s empty-netter to complete the first hat trick against the Phantoms in over two years.

Hart had his personal four-game win streak snapped. Meanwhile, Wilkes-Barre-Scranton (14-10-4) extended its own win streak to five while goaltender Tristan Jarry improved to 6-5-2. Lehigh Valley sustained a regulation loss on the road for only the third time this season as their away record moved to 8-3-2. The Phantoms entered the night tied for the league’s best point-percentage in away games.

The shorthanded goals tallied by the Penguins were the first allowed by Lehigh Valley all season and they came at vital moments in the game. Haggerty’s first goal came on a shorthanded breakaway in the second period that broke a 1-1 tie.

Carter Hart stole the show in the first period in keeping the game deadlocked at 0-0 while the Penguins peppered away on him with a 13-3 shots advantage in the opening frame. 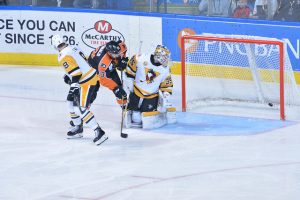 A few minutes later, it was Teddy Blueger emerging on a shorthanded breakaway that he converted around the right pad of Carter Hart for a 1-1 tie that also brought thousands of stuffed animals from the seats on Wilkes-Barre/Scranton’s Teddy Bear Toss Night.

An intercept at center led to a 2-on-0 breakaway for Adam Johnson and Ryan Haggerty which Haggerty converted over the left shoulder of Hart off the underside of the top of the cage for a 2-1 Penguins lead.

Wilkes-Barre/Scranton extended its lead on a wild scramble in the crease after Hart windmilled his left arm to miraculously push a way a puck in mid-air that had briefly gotten behind him. But the Penguins kept pushing the puck around and eventually Haggerty found an opening from the right slot to score over the desperation diving efforts of Colin McDonald and Mike Huntebrinker to give the Penguins a 3-1 lead.

Less than two minutes later, Chris Conner drove up the right wing and left the puck on the doorstep for Mike Vecchione to have a shot off the pads of Jarry which bounced right back to him for a backhand rebound try which he turned into his seventh goal of the season. The tally was also assisted by Taylor Leier and pulled the Phantoms to within a goal again at 3-2.

Just a few seconds after that the tempers boiled over in the closing minutes of the second frame. T.J. Brennan was getting hit by Sam Lafferty when Phantoms defenseman Mark Friedman came rushing in to defend his teammate. While Lafferty and Friedman began their fight an additional scrap broke out between Taylor Leier and Will O’Neill who had also fought against each other the last time the Phantoms were here in October. Eventually, the officials restored order and the tight contest was played relatively cleanly the rest of the way. 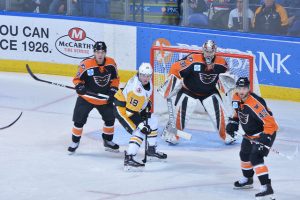 Lehigh Valley had three power plays in the third period in their efforts to tie but were unable to break through against the Penguins’ penalty kill and Jarry. Lafferty’s shorthanded goal followed by Haggerty’s empty-netter for the hat trick completed the scoring.

The Phantoms were 0-for-5 on the power play while Wilkes-Barre/Scranton was held to 0-for-4. The Penguins out shot Lehigh Valley 34-31.

Wilkes-Barre/Scranton now leads the rivalry series 2-1 with still nine meetings remaining between the Penguins and Phantoms including two more in December.

The Phantoms return to PPL Center on Wednesday night taking on the Hershey Bears and on Friday night will receive a visit from the Syracuse Crunch on Wizard Night featuring a Harry Potter style theme. Tickets are available at PPLCenter.com