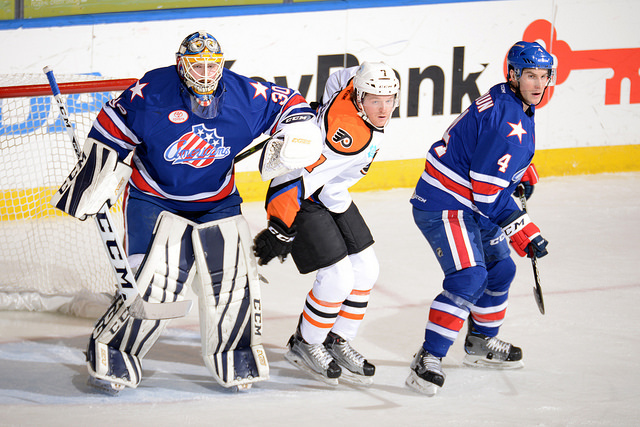 Lehigh Valley, PA – Local product Mark Zengerle probably could not have dreamed of a better homecoming. Born and raised in Rochester, Zengerle was inspired by his return to his hometown and scored two goals to lead the Phantoms in a 4-2 victory at the Americans on Wednesday night.

With some friends and family cheering him on, the winger who previously skated for the Rochester Junior Americans as a little kid found openings in the second and third periods for his big night. Late in the third period he had a close-range opportunity for a deflection in his effort for a hat trick but was unable to steer the puck on net. 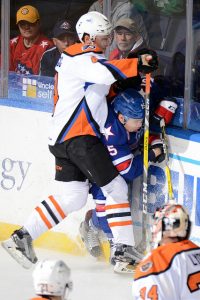 The Phantoms thrived in their penultimate engagement of calendar year 2016 on the strength of puck possession and offensive-zone domination. The affiliates of the Buffalo Sabres were limited to just 16 shots on goal for the entirety of the contest as the Lehigh Valleyians equaled their top achievement for fewest shots allowed initially accomplished in the club’s inaugural campaign.

Lehigh Valley also received goals from Robert Hagg (2nd) and Greg Carey (15th) while Alex Lyon took sole possession of the AHL leadership in victories with his 14th positive decision of the season. Max Lamarche contributed a pair of helpers as did former Rochester American T.J. Brennan who suited up in 88 games for the Red, White and Blue in the 2011-12 and 2012-13 seasons.

But the night certainly belonged to the hometown guy, Mark Zengerle, in a picture-perfect night for him. Before the game, Zengerle elaborated on his excitement level to play in the same arena where he attended so many games as a youth.

“We would come to these (Americans) games a bunch,” Zengerle said. “I remember being with all my little teammates at the time playing with our mini-sticks up in the tunnels up there or in the stands and stuff like that. I don’t know how much watching the game we did. It was moreso running around the rink and playing tag and mini-sticks and that sort of thing. We came a lot.” 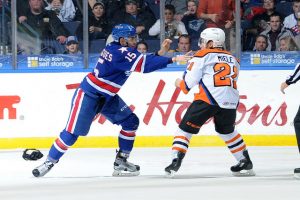 The Phantoms improved to 21-8-1 and equaled the Wilkes-Barre/Scranton Penguins for the most wins in the circuit. The highest scoring team in the AHL at 3.7 goals per game again reached the four-goal mark for an astonishing 18th time this season and improved to 16-1-1 in games in which they connect for four or more.

Lehigh Valley is 6-1-0 in the team’s last seven games and 8-2-0 over the most recent 10. The Phantoms have posted a gaudy win-loss mark of 19-5-0 in November and December combined.

The Phantoms struck late in the opening period with a little help from Lady Luck to open the night’s scoring. Robert Hagg’s low drive from center point was deflected off the stick of Rochester veteran Tim Kennedy in the high slot. Kennedy’s attempt to block the shot went awry and instead the airborne puck arced perfectly over the right shoulder of goalie Linus Ullmark for a 1-0 Phantoms lead. Max Lamarche and Jordan Weal assisted on the play. For Weal, the point was his team-leading 30th of the season moving the crafty centerman into a tie for third in the AHL. 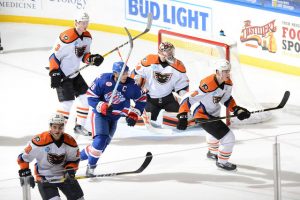 The Phantoms out shot the Rochester Americans 9-3 in the first period as the hosts had difficulty establishing any offensive-zone time at all.

Rochester’s Evan Rodrigues slammed into Phantoms center Andy Miele behind the Lehigh Valley net for a second-period boarding penalty that drew the ire of the Miami (Ohio) product. Miele and Rodrigues agreed to drop the gloves in a skirmish of undersized pugilists that was won decisively by the 5’8″ Miele who landed several punches on the 5’11” Rodrigues. Miele punctuated his first bout of the season with a take-down which ignited his teammates at the Phantoms bench.

Lehigh Valley would convert as a result of the ensuing power play even though the goal would officially be recorded exactly one second after the man-advantage had technically expired. Max Lamarche offered a drive from right point which deflected off a skate and bounced perfectly over to Zengerle on the left of the cage who successfully deposited his first of the night at 9:32 into the second. The red-hot Travis Sanheim also assisted on the play and has now scored 4-2-6 in his last seven games. 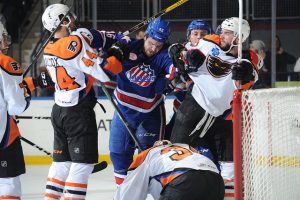 The Phantoms led in shots at that point 13-5 at about the midway point in the game and Rochester seemed to have very little going against the stiflingly strong pressure of the Lehigh Valley skaters.

The Americans stayed with it and would finally secure a surge in the third period to break Alex Lyon’s bid for a potential second career shutout. Justin Bailey’s 13th goal of the season came just over seven minutes into the final frame on a drop by Rodrigues from behind the goal and suddenly the largely dominated Rochester contingent found themselves right back in the hockey game at just a 2-1 deficit.

Zengerle would answer again, this time less than 90 seconds later. Head coach Scott Gordon would smartly employ his fourth-liners to provide some energy and a spark and that’s exactly what they achieved. On a hard forecheck, the Phantoms put the Americans right back on their heels. Trying to muscle in from the left of the cage, Corban Knight saw that his side was mostly sealed but he was able to spot an open Zengerle on the backdoor who was able to blast home his second of the night for a 3-1 Phantoms lead at 8:41 of the third. 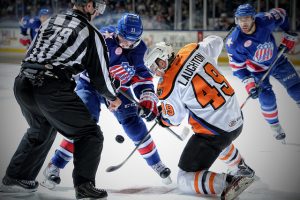 The Phantoms delivered the knockout punch after continued pressure of a late third-period power play. Lehigh Valley pinned the Rochester penalty-killers for two full minutes and kept it up as Rochester’s fifth skater had just returned from the box. Andy Miele on the left dot loaded the gun but then quickly dropped to T.J. Brennan on center-point who also looked to be a threat to shoot. But when Brennan neatly slipped the disc over to Greg Carey on the right dot that proved to be too much on the attempted puck-tracking and rotation of Ullmark who had no chance to move over in time. Carey’s one-time laser from the right dot was essentially into an open net and was good for his 15th of the season rating the hard-shooting winger from Hamilton, Ontario at second in the AHL in total goals.

Cal O’Reilly successfully deposited a rebound over the outstretched right pad of Alex Lyon with just over a minute remaining to provide for the 4-2 final score.

The Phantoms out shot the host Americans 29-16 representing the eighth time in the last nine games Lehigh Valley has shown the advantage on the shot count.

In limiting their opponents to just 16 shots on goal, the Phantoms equaled a team best in the Lehigh Valley incarnation of the franchise initially achieved in a game at Hershey on March 1, 2015. The franchise record for shots allowed is 14 established two different times by the Philadelphia Phantoms on October 26, 1997 against the Hershey Bears and also December 18, 2003 against the Toronto Roadrunners.

The Phantoms were officially 0-for-5 on the power play but two of the team’s conversions came as a direct result of man-advantage pressure and were tallied just an instant after the Rochester penalty had expired. The Americans were limited to 0-for-4 on the power play.

The Phantoms penalty kill in the month of December has allowed just five goals in 39 power plays for a success rate of 87.2%. Lehigh Valley is 3-0 against Rochester with one game remaining in the season series.

Lehigh Valley concludes their Empire State sojourn on Friday night with a rematch engagement against the Rochester Americans. That contest also represents the final outing for the Phantoms before the turning of the calendar to 2017.