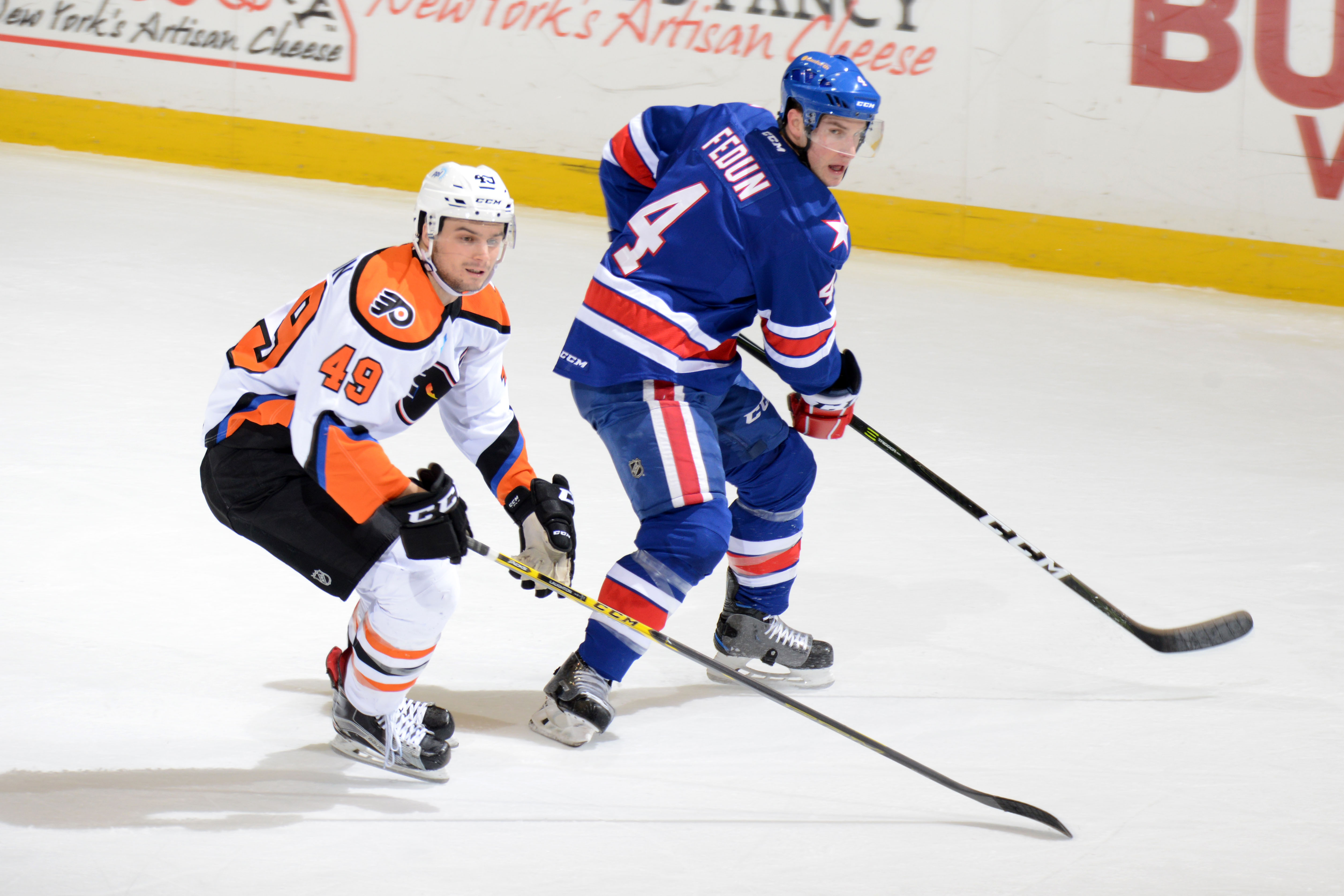 Rochester, NY – The Lehigh Valley Phantoms battled back from deficits of 2-0 and 3-2 to forge a regulation tie at the Rochester Americans before eventually falling in overtime on Taylor Fedun’s 4-on-3 power-play strike. The Phantoms took three out of four points in the two-game series at the Buffalo affiliate and finished the season series with a 3-0-1 mark against the Empire State foes.

The Phantoms concluded the 2016 portion of their schedule with an overall mark of 21-8-2 and gained a point in the Atlantic Division standings on the first-place Wilkes-Barre/Scranton Penguins who lost in regulation against the Providence Bruins.

Greg Carey (16th), Danick Martel (8th) and Chris Conner (8th) all lit the lamp for the Phantoms who made the most of a season-low 18 shots on goal. Will O’Neill notched a pair of strong assists. Carey’s goal is his fifth in the last six games and also his sixth goal in the last eight. After having a three-game goal streak ended on Monday, Carey has started another streak with goals in consecutive contests at Rochester on Wednesday and Friday.

Alex Lyon recorded 36 saves on 40 shots in a night which included several spectacular denials against an inspired Rochester squad who had previously gone down on three consecutive occasions against the talented Phantoms. 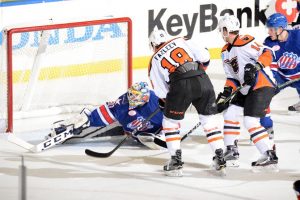 Rochester came out roaring to begin the game on goals by Cal O’Reilly (7th) at 5:59 and then Tim Kennedy (1st) at 11:47. O’Reilly’s goal was discussed by the officials after the cross-ice pass may have hit the veteran captain in the leg or skate on the right of the crease but if it did it was determined to be no distinct kicking motion and thus a good goal.

The Phantoms trailed 2-0 at the first break after they were out shot by the host Amerks 15-5. This was the same Rochester team that mustered only 16 shots on goal for the entirety of the game just 48 hours prior.

Lehigh Valley surged back in the second period with early strikes by Carey and Martel both of which were assisted by Will O’Neill. The first strike came at 1:29 into the second period when O’Neill snagged the puck behind and to the side of the Phantoms goal and offered a perfect home-run pass catching Greg Carey in stride past the Rochester defense for a breakaway. Carey did a little stutter move before flipping a backhander top-shelf to the glove side of Ullmark for his 16th of the season which places him one off the AHL lead.

O’Neill offered a center-point drive that was tipped in front of the net by Martel for a power-play marker at 6:12 to even the score at 2-2. The goal was initially waived off by the officials but after another conference the zebras eventually concluded Martel’s tip was not a high-stick and therefore the call was overturned to be a good goal.

Cole Schneider found a free puck in the slot that he was able to bury on the power play at 9:57 into the second period to put rochester back in front 3-2. Lyon had just made a fine save off the glove on Jean Dupuy’s offer but the mad scramble eventually resulted in the opportunity for the former long-time Binghamton Senator, Schneider.

Samuel Morin dropped the gloves with Dupuy earlier in the period and immediately left the game to go to the locker room but Morin was back on the ice by the end of the second frame and played several shifts in the third period and overtime.

The Phantoms were out shot 16-4 in the second period against a relentless Rochester attack and needed to get things turned round in the third. That’s what the visitors ended up achieving to secure the one standings point while giving themselves a chance for another.

Chris Conner on the left of the crease chipped in a cross-ice give from Jordan Weal on the right dot for the equalizer at 8:44 into the third on the power play. Conner was knocked down on the play but successfully converted the goal that was also assisted by T.J. Brennan who had a pair of assists in the contest as well. Weal’s assist was good for his 31st point of the season which rates tops among the Phantoms and is fourth in the AHL.

Taylor Fedun rushed up the left wing at the end of regulation and hit the crossbar behind Alex Lyon with five seconds remaining as the Phantoms survived the wild finish to earn the one point.

Jordan Weal was tagged with a cross-checking penalty at the beginning of overtime which the Phantoms strongly disputed. Rochester took advantage of theier power-play opportunity. Fedun hit the post again in the overtime and then a few seconds later would convert from the high slot past the left of Lyon for the game-winner.

The Phantoms won the season series from Rochester going 3-0-1. Rochester out shot the Phantoms 40-18. Lehigh Valley was 2-for-4 on the power play while Rochester finished at 2-for-5.

The Phantoms return to action in 2017 with a Friday night excursion to Hartford on January 6. The Phantoms next home games are Saturday, January 7 against the Albany Devils and Sunday, January 8 at 5:05 against the Utica Comets. January 8 is Star Wars Night at PPL Center featuring several Star Wars characters in costume available for interactions, pictures and fun! Tickets for upcoming Phantoms home games are available by clicking HERE.