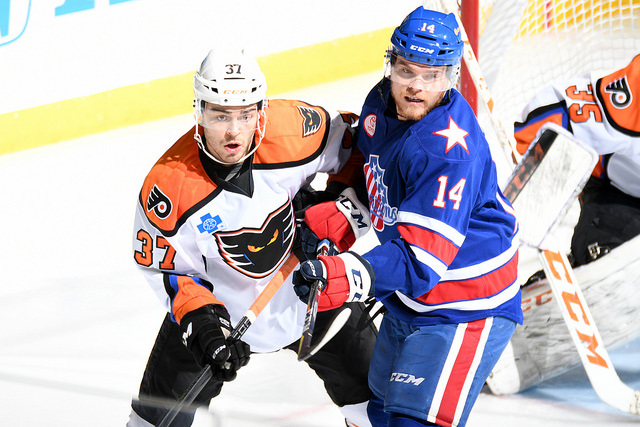 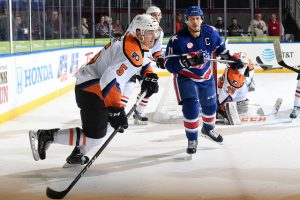 Trailing 2-1 in the third period, Dustin Tokarski made a number of dazzling saves in the frame’s opening minutes to keep the Phantoms in contention but Lehigh Valley’s push to break through against Ullmark eventually ran out of time and the Amerks were able to seal the victory with an empty-netter.

The result was just the second regulation loss in the last nine games for the Phantoms who sport a 5-2-2 mark in that stretch. It was just the fifth regulation loss in the last 19 games for a Lehigh Valley squad that has gone 11-5-3 since November 24. And the Phantoms sustained just their 11th loss of the entire season at almost the midway mark of the campaign with an overall mark now standing at 21-11-5. 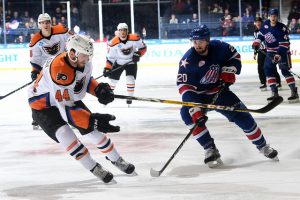 Smith opened the scoring just five minutes into the game on the power play by successfully eluding the Phantoms coverage and speeding behind the defense for a quick breakaway after a perfect pass from Kris Criscuolo connected with him perfectly. Smith tucked the shot around the left skate of Tokarski for a 1-0 lead.

Will O’Neill found T.J. Brennan at the top of the left circle who sniped high-glove on Ullmark midway through the first period for a 4-on-4 goal and a 1-1 tie. Brennan had starred for the Rochester Americans for two seasons in 2011-12 and 2012-13 scoring 30 goals and 35 assists in his 88 total games for the Red, White and Blue.

Brennan now has three goals in the last five games. The goal was his 139th in the American Hockey League moving the five-time AHL All-Star to within 27 of legendary ex-Phantom John Slaney for the all-time AHL record of 166 for most goals by a defenseman. 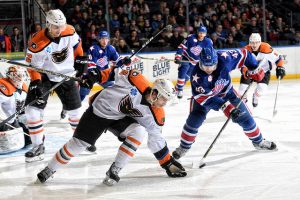 Phil Varone also had a return to his former home arena. The veteran center played over four-and-a-half seasons with the Amerks at the beginning of his pro career encompassing 262 games where he scored 55 goals and 137 assists for his first 192 points as an American Hockey League skater.

Oskar Lindblom had some tremendous chances in the first period in efforts to extend his three-game goal streak. Alex Krushelnyski connected with the 21-year-old from Sweden right out in front for two quick cracks at it but fellow Swede Ullmark denied Lindblom both times. Lindblom also fired a drive off the top of the crossbar from the right circle in the opening period as well.

Tokarski rotated to his left early in the second period to make a magnificent save and, with the puck in the blue paint, Philippe Myers saved the day by pulling it out of there and thwarting the high-flying Amerks offense yet again to keep the game deadlocked at 1-1. 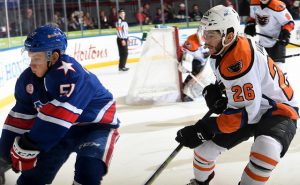 Rochester eventually took the lead for good just past the midway point of the game when they successfully converted on a 2-on-1. Tokarski had no chance on Porter’s backdoor slam on the feed across from Seth Griffith and the Amerks were back in front 2-1.

The Phantoms had some pushes late in the second and at times in the third but couldn’t notch the equalizer. One push when the Phantoms were shorthnaded had Radel Fazleev carrying in deep and then connecting with Steven Swavely trailing in the high slot whose snapper was perfectly snagged in the glove of Ullmark for one of his better saves of the night.

Porter’s length of the ice pass connected with Seth Griffth on the opposite blieline for a breakaway into the empty-net for the 3-1 final.

Rochester out shot the Phantoms 35-27. The Americans were 1-for-5 on the power play while Lehigh Valley finished at 0-for-3.

The Phantoms return to PPL Center on Friday, January 12th taking on the Springfield Thunderbirds on Phantoms Ballcap Night presented by Service Electric. Saturday, January 13th against the Hershey bears is Color Rush Night featuring the official debut of the new bright orange look which the Phantoms will don only three times this season. Secure your tickets for the highly anticipated games online at PPLCenter.com