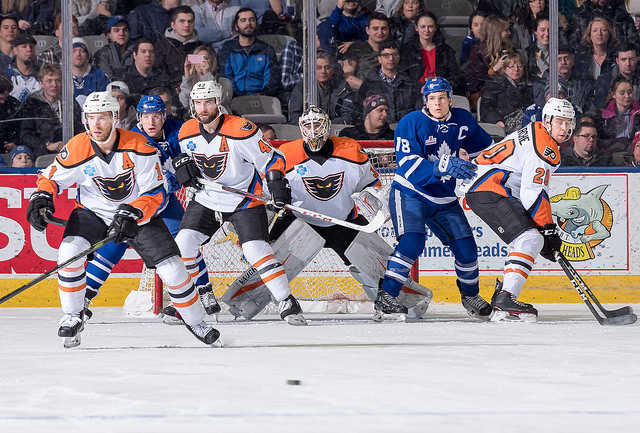 Toronto, ON – A showdown of two of the top teams in the American Hockey League featured both squads taking turns just missing on opportunities for a game winner in an intense and exceptionally well-played affair. Eventually the Toronto Marlies secured a 3-2 shootout verdict while the Phantoms snagged a valuable standings point on the road to open the 2018 portion of the campaign.

Oskar Lindblom (12th) scored in his third consecutive game and the red-hot rookie from Sweden has also tallied in five of the last six contests. Alex Kruselnyski scored his first goal as a member of the Phantoms just one day after he was named to the ECHL North Division squad as a member of the Reading Royals.

But it was the goaltending duel between Alex Lyon and Garrett Sparks that stole the show on this frigid Friday night north of the border. Both netminders successfully cooled off the opposing shooters with some dazzling denials that wow’ed the enthusiastic crowd at Ricoh Coliseum. Lyon’s 35 saves on 37 shots came in his third consecutive start and featured several from in tight and others that required quick reactions on deflections.

The matchup featured two of the best in the AHL going at it in a hard-fought and intense battle befitting of the hype. It seemed clear that these two squads were ready to match each others’ intensity in the well-played contest between immensely talented squads.

The game also marked the return of the Phantoms captain Colin McDonald in his first game since an injury on December 9. Defenseman Mark Alt suited up for the Phantoms for the first time since December 1 having been up with the Flyers for the bulk of December. It was also the 600th game in the professional career of defenseman T.J. Brennan who was immensely popular as a member of the Toronto Marlies just two seasons ago. 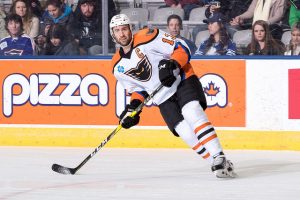 The battle of Eastern Conference heavyweights saw the host Marlies open the scoring on a goal swatted in by Miro Aaltonen (6th) just 49 seconds into the affair on the rebound of a drive by Kasperi Kapanen.

But the Phantoms battled back for a pair of goals in the second period beginning with Krushelnyski’s poke-check at the Phantoms line that he turned into an unassisted backhand breakaway beauty on Sparks at 2:27 of the second to forge a 1-1 deadlock.

Lindblom struck yet again at 8:15 into the second when he tried to slide a pass across the crease to a teammate on the backdoor. But the attempt caromed off a Toronto leg and right back to him where he was able to reach out in front of the goal-line and swat it home from the left of the cage to put the Phantoms in front at 2-1. Reece Willcox sent Lindblom into the zone and received credit for the assist on the play.

From there it was one great chance after another for both sides while Lyon and Sparks turned in a magnificent goaltending display. Lyon stood out in the closing minutes of the third period when he made two separate denials of point-blank drives by Chris Mueller and Miro Aaltonen. Lyon thwarted both with his rapid glove hand to preserve the 2-1 advantage.

But finally it was Colin Greening finding a loose puck on the side of the net and quickly jamming home the tying tally with just 3:39 left somehow sneaking the shot through the left skate of Lyon for a 2-2 tie. 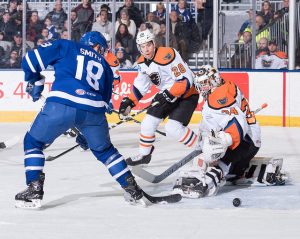 The Phantoms had some glorious chances including a couple tries for Chris Conner down low started up by Greg Carey but the puck can bounce in funny ways sometimes and if Sparks wasn’t there to make the sparking save it would instead be a tied up stick or a hot rebound coming out the wrong way that would save the day for Toronto.

Lehigh Valley enjoyed a power play at the end of the third and into overtime for a glorious chance to emerge victorious. Their best chance on the key man advantage was probably Brennan’s blast from the high-slot in the extra period that Sparks somehow got a glove on.

Toronto was next for the power-play try at the end of the overtime frame but a couple quality blocks by Alt and Willcox helped the Phantoms grind through the penalty kill and push the game to the shootout. But Kapanen put the Marlies up 2-0 in the second round and Chris Conner and Oskar Lindblom were stopped back to back by Sparks to end the contest and deny the Phantoms their opening win of 2018.

Lehigh Valley also gained ground on the first-place Providence Bruins who lost in regulation on Friday night against Hartford. The Phantoms record stands at 21-10-5 while the North Division front-running Toronto Marlies improved to an Eastern-Conference best 25-11-0. Their 25 wins pace the entire American Hockey League.

Toronto out shot the Phantoms 38-35. Lehigh Valley finished 0-for-3 on the power play while Toronto was 0-for-4. The Phantoms penalty kill has held opponents to 1-for-19 in the last five games. 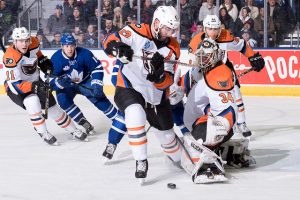 The Lehigh Valley Phantoms conclude their 2018 opening roadie with a Saturday night contest at the Rochester Americans, AHL affiliate of the Buffalo Sabres.

The Phantoms then return to PPL Center on Friday, January 12th taking on the Springfield Thunderbirds on Phantoms Ballcap Night presented by Service Electric. Saturday, January 13th against the Hershey bears is Color Rush Night featuring the official debut of the new bright orange look which the Phantoms will don only three times this season. Secure your tickets for the highly anticipated games online at PPLCenter.com