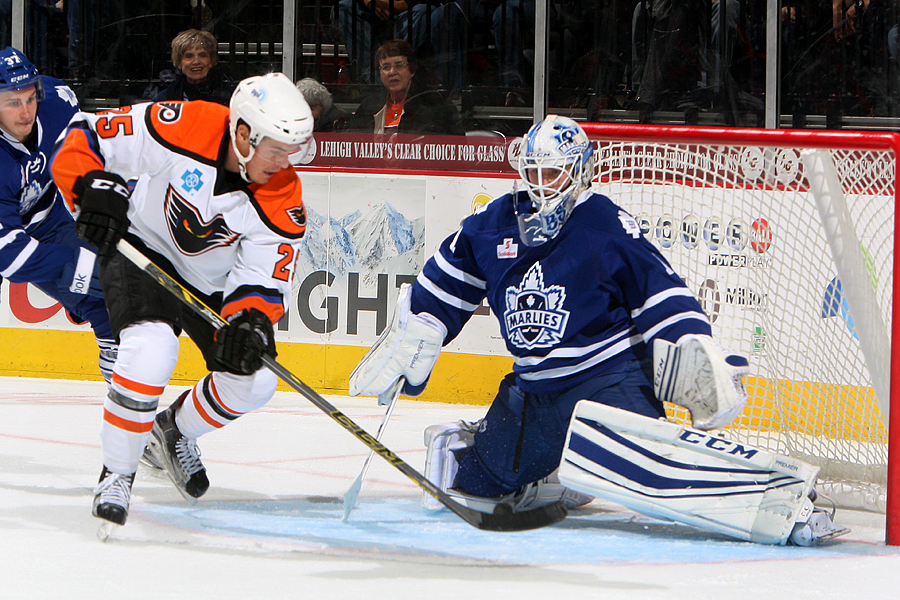 Lehigh Valley, PA – A resilient effort from the Lehigh Valley Phantoms came up just short Sunday evening as the Toronto Marlies were able to hang on for a 3-1 win in front of 6,755 fans at PPL Center. Despite a 3-1 deficit following the opening period, the Phantoms kept pushing and outshot Toronto 17-11 over the game’s final 40 minutes, including a 9-3 edge in the third period.

Taylor Leier scored a highlight-reel shorthanded goal for Lehigh Valley while Anthony Stolarz turned in another solid effort between the pipes with 22 saves on 25 Marlies shots. The goal was Leier’s second of the season and his first professional shorthanded conversion. Meanwhile, Stolarz has now allowed just five goals against in three starts this year and has denied 64 of the 69 total offerings he’s faced. 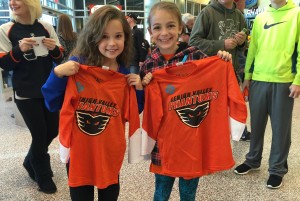 Sunday’s game, which featured a youth jersey giveaway for the first 2,500 kids 14 and under, was the second in a four-game home stand for Lehigh Valley that will see the Phantoms skate in front of the home fans this Wednesday, October 28 and Friday, October 30 before playing on the road again. Wednesday is Pink in the Rink presented by Lehigh Valley Health Network while Friday’s game features a ball cap giveaway to the first 8,500 fans in attendance and is John Walson, Jr. Night presented by Service Electric Cable TV & Communications.

Nikita Soshnikov (2 goals) and Richard Clune (2 assists) led the offensive effort for Toronto while Antoine Bibeau earned the victory between the pipes for the Marlies with 21 saves on 22 shots.

Toronto opened the scoring just under five minutes into the contest when Clune’s pass from below the goal line connected with Frederik Gauthier in the slot who made no mistake in sending home his first professional conversion. James Martin grabbed the secondary assist on the even strength strike netted 4:41 into the tilt.

The Marlies doubled their advantage less than four minutes later when Soshnikov won a battle for a loose puck at the side of the Phantoms net before sending in his second goal of the season. Clune and Casey Bailey assisted on the five-on-five marker tallied 8:25 into the opening period. 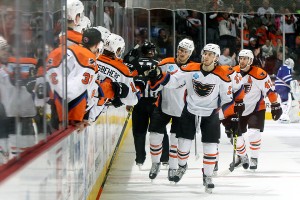 The Phantoms remained resilient though and leveled the contest less than four minutes later despite skating a man short. With Brandon Alderson in the penalty box for boarding, Leier forced a turnover at center ice and quickly darted in on a breakaway resulting in his second goal of the year and Lehigh Valley’s first shorthanded marker of the season. The unassisted conversion came 12:02 into the first frame and was the first professional shorthanded goal scored by Leier. During the Inaugural Season of Lehigh Valley Phantoms, the team scored eight shorthanded goals a year ago including three at PPL Center.

Toronto re-established its two-goal advantage just over a minute later though when Soshnikov stepped over the blue line and unleashed a wrister from the high slot that slipped past Stolarz’s glove and into the back of the Phantoms cage. The unassisted even strength strike came 13:04 into the opening period and marked the second conversion of the night and third of the young season for Soshnikov.

Despite 28 combined shots through the game’s final two periods, including 17 for the Phantoms, the Marlies were able to hang on for a tightly-contested victory.

Even though Lehigh Valley was unable to convert any of its four man-advantage opportunities, the Phantoms held Toronto’s power play off the scoreboard marking its second straight perfect penalty killing effort. Lehigh Valley’s penalty kill was a perfect 4-for-4 on Saturday in a 3-1 triumph over the Providence Bruins.

The Phantoms continue their four-game home stand this week as they welcome the St. John’s IceCaps, the AHL affiliate of the Montreal Canadiens, to PPL Center for a pair of games. First, on Wednesday, October 28, it’s Pink in the Rink presented by Lehigh Valley Health Network. Then, on Friday, October 30, it’s Ball Cap Giveaway and John Walson, Jr. Night presented by Service Electric Cable TV & Communications. The first 8,500 fans in attendance that evening will receive a FREE Phantoms ball cap. Puck drop is scheduled for 7:05 p.m. both nights.

Tickets for both games next week, along with each of the Phantoms’ 35 remaining home games, are available at pplcenter.com, by calling (610) 347-TIXX (8499) or in person at the Mealey’s Furniture Box Office at PPL Center (701 Hamilton).