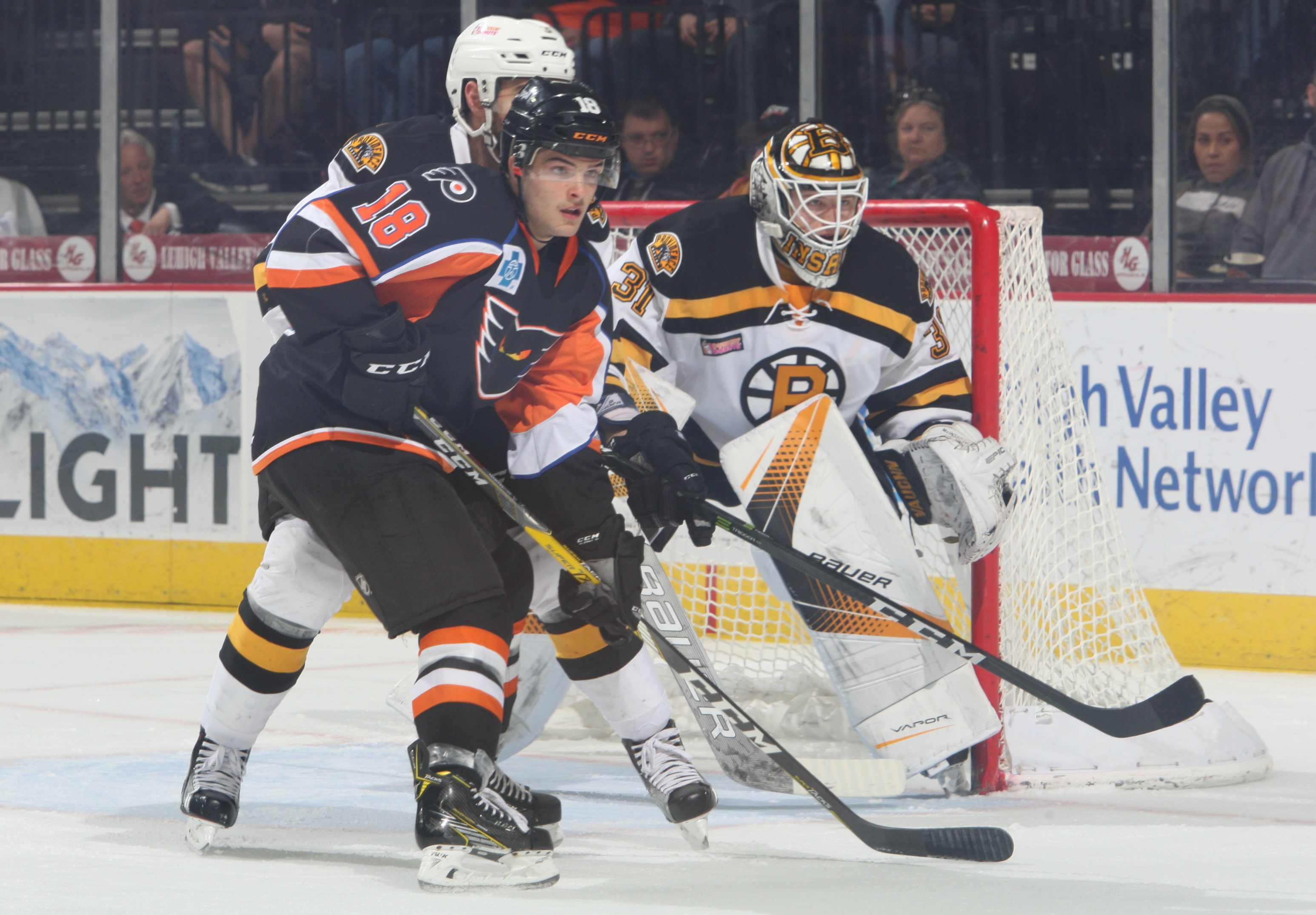 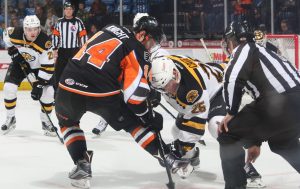 Down two goals with just 62 seconds left in regulation, the Phantoms rallied for a thrilling 5-4 overtime triumph against the Providence Bruins Friday evening in front of 7,950 raucous fans at PPL Center. With the win, the Phantoms improved to 47-23-5 overall this season and secured the number two seed in the Atlantic Division portion of the 2017 Calder Cup Playoffs.

With that, Lehigh Valley will open the postseason in downtown Allentown with Game 1 next Friday, April 21 followed by Game 2 on Saturday, April 22 against either the Bruins or Hershey Bears. Providence and Hershey face off against one another Saturday on the final day of the 2016-17 regular season to determine the final playoff seedings in the Atlantic Division. 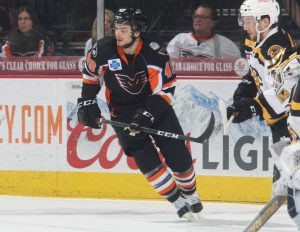 Colin McDonald (25th) and Scott Laughton (18th) also scored for the Phantoms in support of goaltenders Alex Lyon and Martin Ouellette who combined for 28 saves on 32 Bruins’ shots. Fresh off a recall from the Reading Royals of the ECHL, Ouellette earned the victory between the pipes after a perfect 18-for-18 performance in relief of Lyon.

Laughton and Miele’s goals were part of multi-point games as they each registered a goal and an assist. Meanwhile, T.J. Brennan notched a trio of assists in Friday’s game while Travis Sanheim contributed a pair of helpers in the victory. 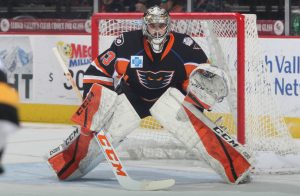 Friday’s game capped the regular season series between Lehigh Valley and Providence as the Phantoms produced a solid 4-2 mark in six collisions with the Bruins this season.

The Phantoms wasted little time getting the scoring started Friday evening as Lehigh Valley converted less than a minute into the rivalry showdown when Laughton expertly redirected Maxim Lamarche’s high slot offering for his 18th goal of the season. Taylor Leier collected the secondary assist on the even-strength strike notched just 31 seconds into the game. Laughton’s tally marked the 40th time this season the Phantoms have landed the game’s first goal as Lehigh Valley improved to 31-9 when scoring first this year.

Providence responded quickly though and leveled the contest just over a minute later when, while on the power play, Peter Mueller cruised down the left wing before depositing his 13th goal of the year. Austin Czarnik and Alex Grant assisted on the equalizing marker tallied 1:35 into the first period.

The Bruins then grabbed their first lead of the night less than two minutes later when, during another power play opportunity, Jake DeBrusk won a battle for a loose puck atop the Lehigh Valley goal crease before converting his 19th goal of the season. Mueller and Matt Grzelcyk garnered assists on the man-advantage marker buried 3:08 into the opening frame. Providence’s power play tallies were the first man-advantage markers surrendered by the Phantoms in seven games after a string of 21 straight successful kills. 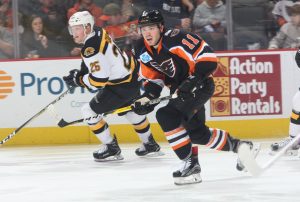 The Bruins extended their lead to a 3-1 advantage before the close of the opening period when a side-angle throw by Wayne Simpson from the left goal line found daylight just inside the post for Simpson’s 16th conversion of the year. Colton Hargrove and Rob O’Gara assisted on the goal, which came 15:08 into the first period during four-on-four action.

Providence then claimed a 4-1 lead with the only second-period conversion when Chris Porter landed his eighth goal of the season. After a tremendous individual effort by a sliding DeBrusk created a back-door opportunity, DeBrusk made no mistake in extending the Bruins’ advantage. Czarnik grabbed the secondary assist on the five-on-five tally netted 1:18 into the middle stanza.

But the Phantoms have been one of the AHL’s most resilient teams throughout this season and that resiliency was on full display Friday.

The comeback began a little over nine minutes into the third period when McDonald harnessed a loose puck within the Providence goal crease before sending home his 25th goal of the year. Laughton and Sanheim assisted on the even-strength strike buried 9:09 into the third period. 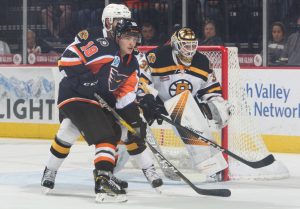 Then, down a pair of goals and with Ouellette back to the bench for the extra attacker, Lehigh Valley displayed its offensive magic once again. First, the Phantoms trimmed the Bruins’ advantage down to just a single goal when Carey converted his team-leading 28th goal of the season with just over a minute left in regulation. Then, with just 31 seconds left to play, Miele unleashed a seeing-eye wrist shot from the left wing that zipped through a McDonald screen at the side of the net before settling into the back of the Providence goal. Sanheim and Brennan assisted on the game-tying tally that sent the Phantoms faithful in attendance into a frenzy.

With momentum squarely in their corner, the Phantoms capped their epic comeback just 48 seconds into overtime when Chris Conner dished a perfect pass to the side of the goal for Knight who promptly stashed in his 11th goal of the year.

The Phantoms close out the 2016-2017 regular season this Saturday when the team travels up to Binghamton for a 7:05 p.m. showdown with the Senators.