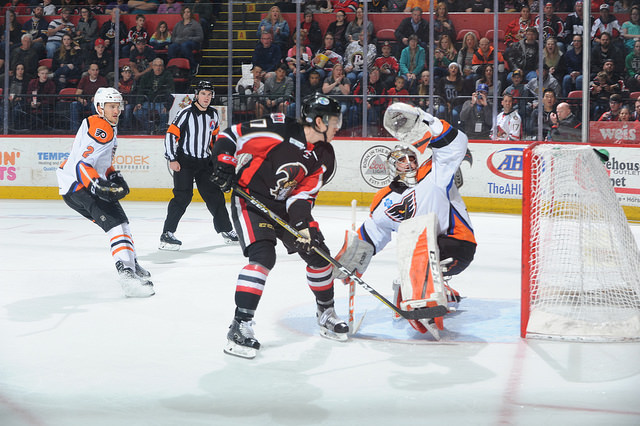 Lehigh Valley, PA – Martin Ouellette turned in a season-high 45-save performance in a 4-1 victory at the Binghamton Senators on Saturday night to wrap up the 2016-17 regular season. Now it’s on to the Calder Cup Playoffs for the Lehigh Valley Phantoms who learned they will square off with the Hershey Bears beginning Friday and Saturday at PPL Center to open the Best of Five Series.

The Phantoms completed a six games to nothing season sweep of the Binghamton Senators on goals by Andy Miele (13th), Taylor Leier (13th), Scott Laughton (19th) and Danick Martel (20th).

Lehigh Valley finishes the regular season at 48-23-5 for 101 points. It is the first time for the Phantoms to reach the century mark since the 2004-05 season when the Philadelphia Phantoms went on to claim the Calder Cup. 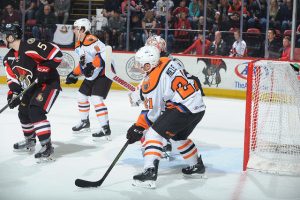 The sellout crowd in Binghamton was witness to the end of an era. Saturday marked the last game ever for the Binghamton Senators after 15 years affiliated with Ottawa and the night was filled with tributes to the past and a bittersweet feeling during the fond farewell. Next year the Southern Tier fan-base in New York will cheer for the new Binghamton Devils while the AHL will also welcome the new Belleville (Ont.) Senators to the circuit.

Laughton’s breakaway strike in the second period pushed him into a tie for the league lead in shorthanded goals with four.

T.J. Brennan’s assist on the goal scored by Andy Miele gave Brennan a team-leading 60 points on the campaign. Brennan finished had the most points of all AHL defensemen tied with Matt Taormina of Syracuse.

The game also marked the professional debut of defenseman Mark Friedman who notched his first career point assisting on Leier’s goal in the second period. Friedman also showcased his blazing speed when he chased down Binghamton’s Gabriel Gagne to block a breakaway opportunity.

The Phantoms rested several of their regulars in this game allowing Colin McDonald, Chris Conner and Robert Hagg all to take a breather and rest up for the playoffs.

But it was the third-year goalie call-up from Reading, Martin Ouellette, who stole the show. The University of Maine product was magnificent on several point-blank opportunities for the B-Sens as well as other close-range tips. 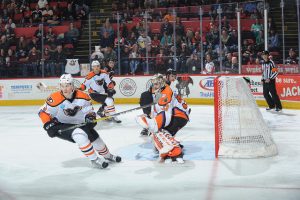 The Phantoms opened the scoring shortly after one Ouelltte’s fine save on a shorthanded push when he denied their captain Mike Blunden on the doorstep. Lehigh Valley took advantage of the aggressive penalty killers and eventually sprung Miele free behind the D to convert on his close-range breakaway for a 1-0 lead. Corban Knight and T.J. Brennan moved the puck quickly from one side to the other on the power-play conversion. The 73rd power-play conversion of the season for Lehigh valley was second-most in the AHL and tied with Toronto for most in the Eastern Conference.

Lehigh Valley turned up the pressure in the second period for their next tally. Mark Friedman neatly held the line and eventually Scott Laughton from the left wall connected with Taylor Leier in the slot to cap the surge of shots at Chris Dreidger. The Phantoms doubled their lead at 4:40 into the second period.

The Phantoms would strike again on the man-advantage but this time it was Binghamton on the power play. Scott Laughton picked the pocket of former teammate Jason Akeson and when Leier nudged the puck forward, Laughton was off to the races on his second breakaway of the period. This time Laughton would go to the forehand and fire the puck past the blocker of Dreidger for a 3-0 advantage for the Phantoms.

Ouellette remained magnificent throughout including a tremendous denial on the right toe of a close-range shot and a snappy reach up with the left arm on a Max McCormick breakaway.

The B-Sens finally broke through on their 39th shot of the game with Casey Bailey from the top of the left ring picking the far corner just off the left shoulder of Ouellette. The Penn State product’s 21st goal of the season would also be the last goal ever for the Binghamton Senators. And it would cut the Phantoms lead to 3-1.

The last goal of the regular season for the Lehigh Valley Phantoms would come off the stick of Danick Martel who reached the 20-goal mark for the second season in a row. Martel shook off a back-check and bounced right off the boards and headed to the slot where Greg Carey was able to find him from behind the goal for the snappy connection and the 4-1 advantage the Phantoms would maintain to the finish-line.

Ouellette’s 45 saves were the most for the Phantoms this year. Alex Lyon and Anthony Stolarz had both turned in 44-save efforts earlier this season. Binghamton out shot the Phantoms 46-21. Lehigh Valley was 1-for-2 on the power play while Binghamton finished at 0-for-4.

With the close of the third season of the Lehigh Valley Phantoms comes the official beginning of the Calder Cup Playoff era in Center City Allentown. The Hershey Bears arrive to PPL Center for Games 1 and 2 next Friday and Saturday for a pair of 7:0 tilts. Hershey locked up the third-place position with their 3-0 win over the Providence Bruins in their season finale.

The Phantoms will travel to Hershey on Wednesday, April 26 for Game 3 and then would head back for Game 4 on Saturday, April 29.

If the Best-of-Five series goes the distance then the Phantoms would host the final game at PPL Center on Sunday, April 30 at 5:05 p.m. The winner of the Lehigh Valley vs. Hershey series will square off with either the Wilkes-Barre/Scranton Penguins or Providence Bruins in the Division Finals.

Individual game tickets, Playoff Flex Packs and Playoff Ticket Strips that automatically renew from one series to the next are all on sale now. Call the Phantoms for more information at 610-224-4625 or purchase online at PPLCenter.com