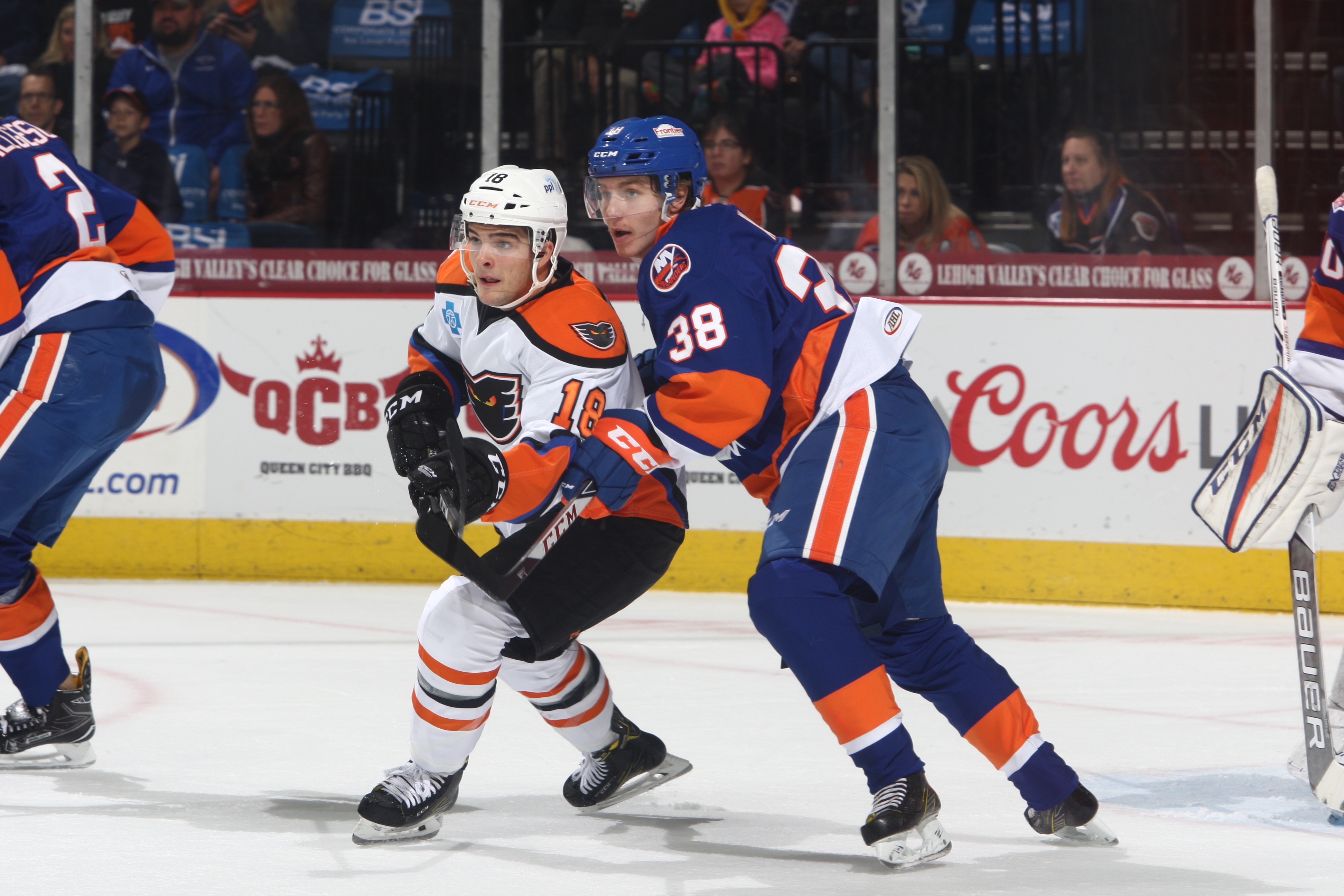 Lehigh Valley, PA – Danick Martel continued his torrid start to the season as he recorded two goals, an assist and a fight Friday evening in guiding the Lehigh Valley Phantoms to a 5-2 win over the visiting Bridgeport Sound Tigers in front of 7,541 fans at PPL Center. It was the first professional Gordie Howe hat trick (goal, assist, fight) for the 22-year-old winger who is now tied for the league lead with seven goals and 10 total points. 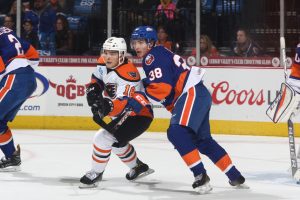 Win the win, the Phantoms improved to 4-1-0-1 on the season as the team won its third consecutive game. Lehigh Valley is now 3-0 at PPL Center and has claimed nine of a possible 12 standings points through the club’s first six games.

Greg Carey (3rd), Phil Varone (2nd) and Chris Conner (1st) also found the back of the net for Lehigh Valley on Friday in front of goaltender Dustin Tokarski who was making his Phantoms’ debut after a trade with the San Diego Gulls brought the ninth-year netminder to Lehigh Valley earlier this month. In his Phantoms debut, Tokarski turned aside 31 of Bridgeport’s 33 total shots and recorded an impressive 14-save third period in sealing the victory for Lehigh Valley.

Defenseman Mark Alt matched a game-high with three points (all assists) to go along with a plus-three rating. 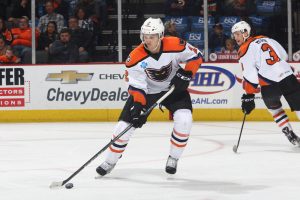 Steve Bernier (3rd) and Ben Holmstrom (1st) provided the offense for visiting Bridgeport in front of goaltender Kristers Gudlevskis who recorded 27 saves between the pipes for the Sound Tigers.

The Phantoms opened the scoring less than five minutes into the contest when a give-and-go between Carey and Varone in neutral ice opened up a shooting lane for Carey on the left wing who promptly snapped home his third goal of the season. Varone and Mark Friedman assisted on the even-strength strike tallied 4:36 into the first period.

Lehigh Valley preserved its 1-0 advantage through the first period thanks to solid goaltending by Tokarski. In his first period in a Phantoms uniform, the 28-year-old netminder turned away all 10 Bridgeport shots he faced and authored one of the most sensational saves fans at the PPL Center have ever witnessed. While sprawled across the goal line, Tokarski saw the Sound Tigers work the puck into the slot in front of what appeared to be a wide open net but Casey Bailey’s wrist shot was seized by a desperation glove save that brought every Phantoms fan in the building to their feet in raucous amazement. 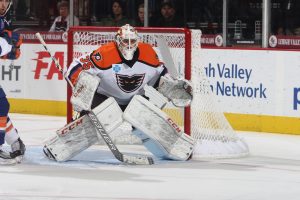 Lehigh Valley then swelled its lead to a 3-0 edge thanks to a pair of goals late in the second period. First, with less than six minutes remaining in the middle stanza, Mike Vecchione angled a brilliant pass off the boards that connected with Martel in stride who was able to dart in on the wing before driving home his sixth goal of the season. Samuel Morin grabbed the secondary assist on the five-on-five conversion netted 14:23 into the second period. Then, despite skating shorthanded, Steven Swavely was able to slip a perfect cross-ice pass to Conner on the right wing who quickly snapped in his first goal of the year. Alt garnered the second assist on the shorthanded marker tallied 18:53 into the middle frame.

The Sound Tigers sliced into Lehigh Valley’s lead with third-period goals from Bernier and Holmstrom but the Phantoms responded in kind to seal the 5-2 triumph. Clinging to a one-goal lead, Martel won a battle for a loose puck atop the Bridgeport goal crease before slamming home his second goal of the night and team-leading seventh tally of the season. Alt and Nic Aube-Kubel assisted on the even-strength strike netted 17:49 into the third period. Lehigh Valley then landed the final conversion of the net when Martel completed the Gordie Howe hat trick with an assist on Varone’s empty-net tally scored with just 14 seconds left in regulation. Alt capped his impressive night with his third assist on the game’s final goal.

The Phantoms cap this week’s action on Saturday when the team heads up to Binghamton for their first showdown of the season with the Devils.