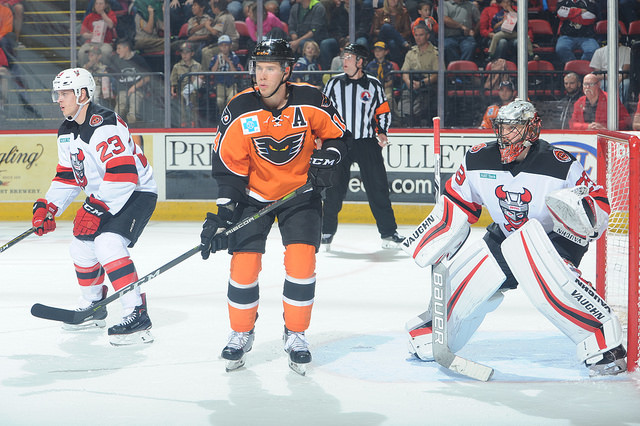 Binghamton, NY – The Lehigh Valley Phantoms pushed through for an exciting road win on Saturday night to run their win streak to four while pinning the new Binghamton Devils with their first-ever regulation loss in franchise history. The match-up of two of the top teams in the early season in the AHL saw the Phantoms improve to 5-1-1 while the Devils fell to 3-1-1 in an intense and wild affair.

Corban Knight (1st), Mark Alt (1st), Samuel Morin (1st) and Nicolas Aube-Kubel (3rd) provided the offense for the Phantoms while Alex Lyon turned aside 28 Devils drives for his fourth victory of the season. Morin added an assist on his way to earning #1 Star of the Game honors. His clear in the air out of the zone eventually connected with Aube-Kubel who scored the game-winner with 9:05 left in the third. 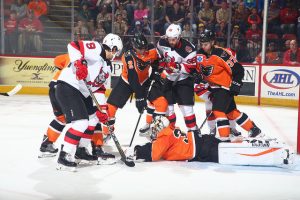 Binghamton found iron two different times in the third period as they amped up the pressure for an equalizing goal. And Blake Pietila just missed from the right of the cage with about 20 seconds remaining as his drive cruised through the blue and missed the net. Lyon also made several tremendous stops along the way to preserve the win including a push across to deny a quick, backdoor opportunity early in the third when veteran Tim Kennedy appeared to be on the verge of evening the score.

The Phantoms came out flying right from the jump and peppered away on Binghamton goalie Mackenzie Blackwood with the first 10 shots on goal. Oskar Lindblom had a pair of glorious chances in the early minutes while Greg Carey and Danick Martel also found quality scoring tries. But somehow the Devils hung on through the early onslaught and then caught their big break a couple minutes later.

A friendly and fortuitous bounce on a rut in the corner on a normal looking dump-in caught Lyon leaning behind the net where everyone expected the puck to be. But the wacky carom pushed the biscuit right back out in front of the open net where Blake Pietila was successful in out-racing Lyon to the empty-cage for the quick chip home. Pietila’s second of the season at 7:45 gave the hosts the early and lucky 1-0 lead despite the shots being 10-1 in favor of the Phantoms.

Binghamton picked up the pace after the momentum-lifting lucky break but Alex Lyon was up for the task.

The Phantoms finally found the back of the net on their 17th shot of the game at 14:36 into the first period when Mark Friedman neatly held the line on the right point allowing rookie Oskar Lindblom to go to work in the corner. Lindblom found an open Corban Knight in the right slot who had enough room to skate two strides to his left and push a backhander past the blocker of Blackwood. Knight’s first goal of the season also marked the first helper and first point of the year for linemate Oskar Lindblom potentially representing the end of the tough breaks for the snake-bit duo who had hit the posts a combined seven times this year. 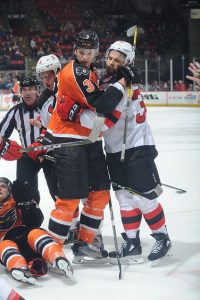 Less than two minutes later the Phantoms took the lead when Mark Alt wired a long-range shot just inside the left post for his first of the season with Phil Varone and Greg Carey notching the assists. Alt had just missed connecting with the left side of the cage on a number of shots earlier in the year but this one was perfect. Alt’s 13th career goal came in his 244th game all-time in a Phantoms sweater which is the most among all active players on the team.

36-year-old Bracken Kearns struck back for Binghamton on the power play after an end-boards rebound knocked around to multiple sticks and bodies in a crease scramble. The former Bridgeport Sound Tigers leading scorer secured his first goal with his new team to even the count at 2-2 with just under 2:00 remaining in the see-saw opening frame.

The Phantoms responded with yet another conversion with just 4.6 seconds left on a shot from the left point by hulking defenseman Samuel Morin who found the inside of the post on the short side to beat Blackwood past his left skate. The Flyers first rounder in 2013 who is in his third season with the Phantoms successfully picked up his eighth career goal in 155 games with Lehigh Valley.

When the dust had cleared the Phantoms carried a 3-2 advantage into the first intermission while holding a 22-9 shots advantage over the Devils.

The pace settled down some in a more evenly played second period and while both teams had some quality chances, neither would find the back of the net. A couple of impressive offensive-zone cycles from the fourth liners were attention grabbing as the hard-working trio of Tyrell Goulbourne, Mikhail Vorobyev and Radel Fazleev kept the Devils pinned in their own zone for longer than they likely wanted.

Aube-Kubel cut across his own zone and his skate caught the leg of an opposing Devil forward sending him flying. Josh Jacobs took exception to the violent looking contact and jumped Aube-Kubel with a few punches in their fight. Ultimately, Jacobs’s instigation penalty washed out Aube-Kubel’s tripping minor and both teams skated 5-on-5 on the other side of the late, middle-frame fireworks. 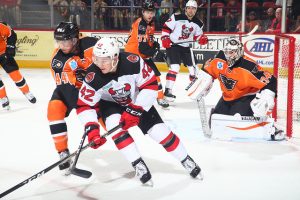 The Phantoms were on their heels for the early minutes of the third period while Binghamton put forth their best push. But Lyon made several big saves including one stop sliding to his right for a quick drive emanating from the left dot following a bank-shot off the overly active end-boards with Tim Kennedy wide open on the backdoor. But somehow Lyon pushed over to the other side in time for the terrific pad stop which was perhaps his top save of the game.

Lehigh Valley looked like they were playing volleyball in their efforts to score the eventual winning goal. Still hanging on to a 3-2 lead in the third period, Sam Morin in the corner had a piece of the puck on a clearing try and then in mid-air Mike Vecchione batted the puck across the line. The bouncing action eluded rookie defenseman Colton White on the blue-line and sprung free the speedy Aube-Kubel who raced away with a 2-on-1.

Aube-Kubel carried to the high slot where he blasted through his third of the season off the top of the right post where it then rattled around the top of the cage also hiting the opposite post on its way in. The pivotal strike with 9:05 remaining pushed the Phantoms advantage to a more comfortable 4-2 margin. Aube-Kubel had league-leading scorer Danick Martel on the left wing but apparently decided it was his own turn to light the lamp!

But the Devils weren’t finished yet. With both teams down a skater, Brandon Gignac scored his first professional goal on the backdoor to cap a 3-on-2 rush and with just 2:36 to go it was a one-goal game again. And the timing of Binghamton’s strike came right before they were due another power play. But the Phantoms held on through the ensuing 5-on-4 as well as the subsequent 6-on-5. Pietila had what appeared to be a terrific opportunity in the closing seconds with an opening at the net but his shot from the right of the cage missed through the blue. Corban Knight chased down the shot in the corner and fired all the way down ice with six seconds left. The speedy Chris Conner got on his horse to win the icing race to effectively finish the game by avoiding the offensive zone face-off.

Lehigh Valley out shot Binghamton 37-31. The Phantoms were 0-for-4 on the power play while the Devils finished at 1-for-4.