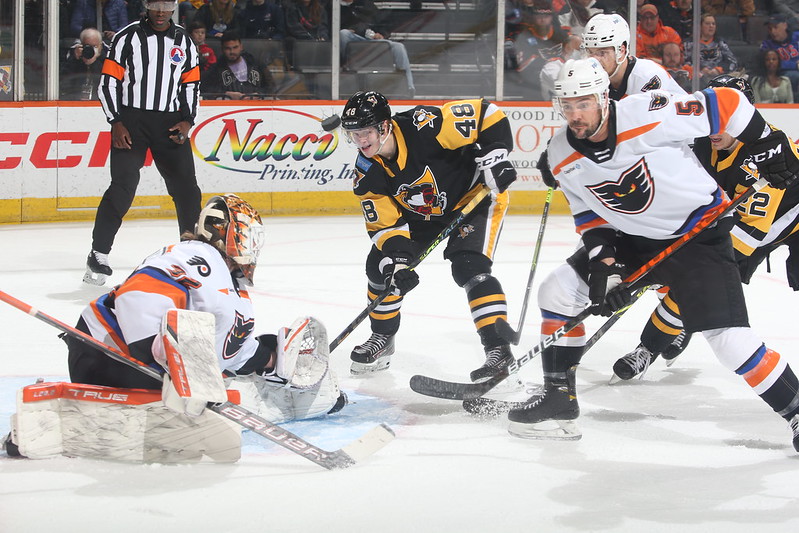 Lehigh Valley, PA – The longest point streak in Lehigh Valley Phantoms’ team history came to an end at nine as the Wilkes-Barre/Scranton Penguins took a 5-2 decision at PPL Center on Saturday night.

After the Phantoms fell behind 4-0, Adam Clendening set up a pair of power-play goals in the third period from Connor Bunnaman (5th) and Wade Allison (1st) but the team’s late comeback efforts ended when Taylor Fedun (2nd) sealed the win for Wilkes-Barre/Scranton (10-15-4) with an ice-length empty-netter to snap the Penguins’ eight-game losing slide.

Wilkes-Barre/Scranton took a 1-0 lead to the midway nark of the game when they strick thrice in a quick span of 1:37 in the second period. When the dust had settled, the Penguins enjoyed 4-0 advantage after tallies by Sam Poulin (5th), Felix Robert (8th) and Nathan Legare (3rd). 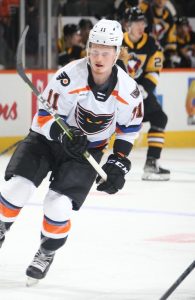 The Penguins struck first ten minutes into the game on Valterri Puustinen’s team-leading 11th goal of the season. It was the fifth time for the Finnish product to light the lamp against Lehigh Valley (10-12-7).

The Phantoms were out shot in the first period 13-3 and that disparity grew to 24-4 with Felix Sandstrom keeping the Phantoms within a goal before the Penguins buried their three straight chances for a more comfortable lead. Ian Laperriere called a midgame timeout to reset the team and get matters back on track.

Lehigh Valley had a 5-on-3 power play advantage at the end of the second to try to gain some momentum but were unable to break through.

Lehigh Valley pushed back in the third in search of another miraculous comeback which had almost become a hallmark of the point streak. Adam Clendening dangled his way through the entire Penguins’ penalty kill to drive at goalie Tommy Nappier who made a point-blank pad save on the sharp thinking defenseman. But the rebound found Connor Bunnaman’s stick on the right of the cage for the putback with 9:03 left to get the Phantoms on the board.

Clendening set up the next man-advantage marker as well when his center-point drive off the pads of Nappier bounced out to Wade Allison beneath the left dot who offered a quick sharp-angle second shot that hit the back of the net for his first goal of the season. The hard-shooting, second-year winger from Myrtle, Manitoba began the season on the shelf with an ankle injury and then, just three games into his return in December, was sidelined with an elbow injury. Tonight was Allison’s second game after a nearly month-long layoff and it was his fifth game overall this season for his first goal of the year.

Lehigh Valley pulled Sandstrom immediately after the center faceoff win and had a couple of chances with the extra attacker but eventually Fedun finished the night with his second goal of the season shooting it all the way down the ice from in front of his own empty net.

The Phantoms are 2-3-1 against the Penguins this year and will rematch in Wilkes-Barre/Scranton on Wednesday night for Game 7 of the 12-game rivalry series.

The Phantoms are back at PPL Center on Sunday afternoon taking on the surging Toronto Marlies, who have won five straight. Sunday’s 3:05 p.m. game is also Youth Jersey Day for the first 1,500 kids age 14 and younger presented by Service Electric and Velaspan.

After Sunday’s home game, the Phantoms embark on a stretch of five consecutive away games beginning Wednesday in Wilkes-Barre and continuing next Saturday and Sunday with a pair of games at Charlotte.