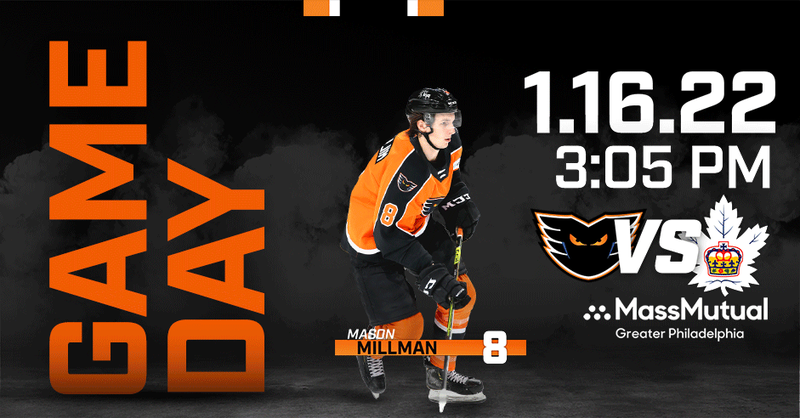 TONIGHT: It’s a Phantoms Gameday presented by MassMutual as the Lehigh Valley Phantoms take on the Toronto Marlies at PPL Center in a 3:05 p.m. start. It’s Youth Jersey Day for the first 1,500 kids age 14 and younger presented by Service Electric and Velaspan. Lehigh Valley had a record nine-game point streak snapped on Saturday and enters play this afternoon at 10-12-7. The Toronto Marlies have won five straight, including a 4-3 overtime victory at Hershey on Saturday. Toronto took the previous meeting this season on November 20 in Toronto on an overtime winner by Josh Ho-Sang. The Phantoms are 2-1-1 in Sunday games this season including a win in their most recent Sunday game on December 12 in a 4-3 shootout victory over Hartford at PPL Center.

LAST TIME: All good things must come to an end. The Wilkes-Barre/Scranton Penguins snapped the Phantoms’ nine-game point streak with a 5-2 triumph on Saturday night at PPL Center to wrap up the home-and-home weekend set in which the two teams traded road victories. Connor Bunnaman and Wade Allison scored for the Phantoms in their third period comeback but a three-goal surge in a span of just 1:37 midway through the second period gave the visitors a 4-0 advantage which Lehigh Valley could not overcome.

HISTORIC STREAK: Lehigh Valley’s nine-game point streak is a new team record (since the Phantoms arrived to Allentown in 2014). It is the first time in 17 years for the Phantoms franchise to have a point streak that long dating back to 2004 when the Philadelphia Phantoms won 17 straight (an AHL record at the time)

OLYMPICS HONOR: Pat Nagle has been chosen to play for the United State National Team at the upcoming 2022 Winter Olympics in China. The 34-year-old veteran goalie will depart the Phantoms at the end of January.

TORONTO MARLIES: The Marlies are surging to the tune of a five-game winning streak including an overtime victory at Hershey on Saturday with Alexander Steeves ending the game in the 3-on-3 session. Former Islanders’ first-rounder Josh Ho-Sang leads active Marlies scoring 11-9-20 including another goal yesterday at Hershey. Toronto head coach Greg Moore played for the Adirondack Phantoms in 2010-11.

NOTEABLES:
– Wade Allison returned for Friday night’s game and scored his first goal of the season on Saturday. He had not played in almost a month since an elbow injury on December 17. Before that, Allison had played in just three games this season after sustaining an ankle injury during Flyers’ Training Camp in September.

UP NEXT:  The Phantoms take to the road for five straight after today’s game beginning with a Wednesday night rematch at the Wilkes-Barre/Scranton Penguins followed by Saturday and Sunday tilts next weekend at the Charlotte Checkers. The Phantoms return to PPL Center on Sunday, January 30 at 5:05 p.m. against the Hershey Bears on Kids Activity Book Night.