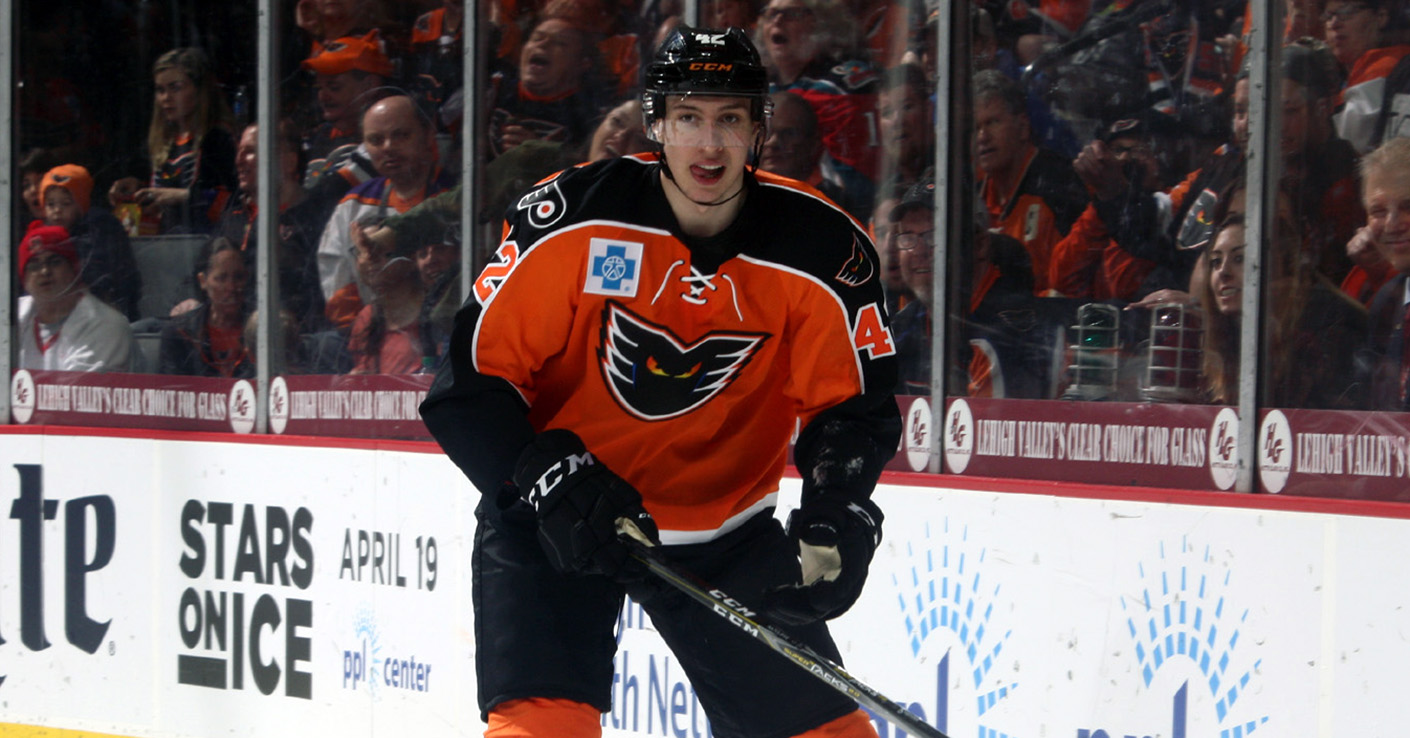 Voorhees, N.J. — When asked what player he would most want to play along side on a roster, Philadelphia Flyers prospect Isaac Ratcliffe said, “Morgan Frost.”

The 20-year-old, six-foot-six-inch forward will certainly get that chance, beginning this week.

Ratcliffe and 40 other prospects taking part in the Flyers annual development camp this week will not only spend time on the ice together, but also build relationships with future teammates off the ice too.  Of course, the focus is centered around improving on the ice, but that is just one of the things that Ratcliffe looks forward to when seeing development camp on the calendar.

“[It’s nice] just seeing all of the familiar faces,” the native of London, Ontario, said smiling.  “Seeing some of the guys I haven’t seen in quite a few months and some of the guys that I have played against for a little while.  Joking about some of the things that we’ve gone through this year and things like getting down to the beach too and enjoying ourselves there.  Plus, getting to meet some of the fans and seeing how electric it can get when all of the fans get around us.”

After finishing the fourth and final season of his junior hockey career with the Guelph Storm of the Ontario Hockey League, where he amassed a total of 124 goals and 93 assists for 217 points in 245 games, Ratcliffe will head into his first full season as a professional.  But, the 20-year-old may have a leg up on the competition.  He is one of a few Flyers prospects that have been able to see some playing time with the Lehigh Valley Phantoms.

During the tail end of the 2017-18 season, after his team bowed out of the OHL Playoffs in the first round, Ratcliffe was assigned to the Phantoms to get a feel for the pace of play at the American Hockey League level.  Only 19 years old at the time, the 2017 second-round selection (35th overall) of Philadelphia potted his first professional goal in his first professional game with Lehigh Valley on April 13, 2018, against the Bridgeport Sound Tigers.

The goal, which came off of a Reece Willcox shot that Ratcliffe tipped in while standing at the top of the crease, could potentially be a bit of foreshadowing.  A six-foot-six-inch frame will most certainly reek havoc upon a number of pro goaltenders, and should allow the rookie to both screen the goalie and create nearly an immovable object in front for opposing defensemen.

While he’s already seen some success in the AHL, Ratcliffe said that his short stint of time with the Phantoms has helped him to realize what he needs to continue to work on while making the transition to being a fulltime professional hockey player.

“On the ice, the biggest thing I noticed is that it’s a lot faster and the decision making is a lot quicker too,” he said.  “My skating is the biggest part of it.  The first three steps have got to be a lot quicker and I think that straight back and forth, up and down the ice is something I have worked a lot on over the years.  It’s come a long way, but now it’s just those quick three strides out of the corner, from the back of the net or in front of the net.  Wherever it is.”

And while this may not be his first go around at the Flyers development camp, the Canadian forward said that there is value in not only learning new things each year, but refreshing his mind with the things that he has already been taught.

“They are always adding new things to us,” Ratcliffe said.  “It’s a lot of information to take in, and on top of that, when you hear the same thing over and over, it’s really going to implant in your brain.” 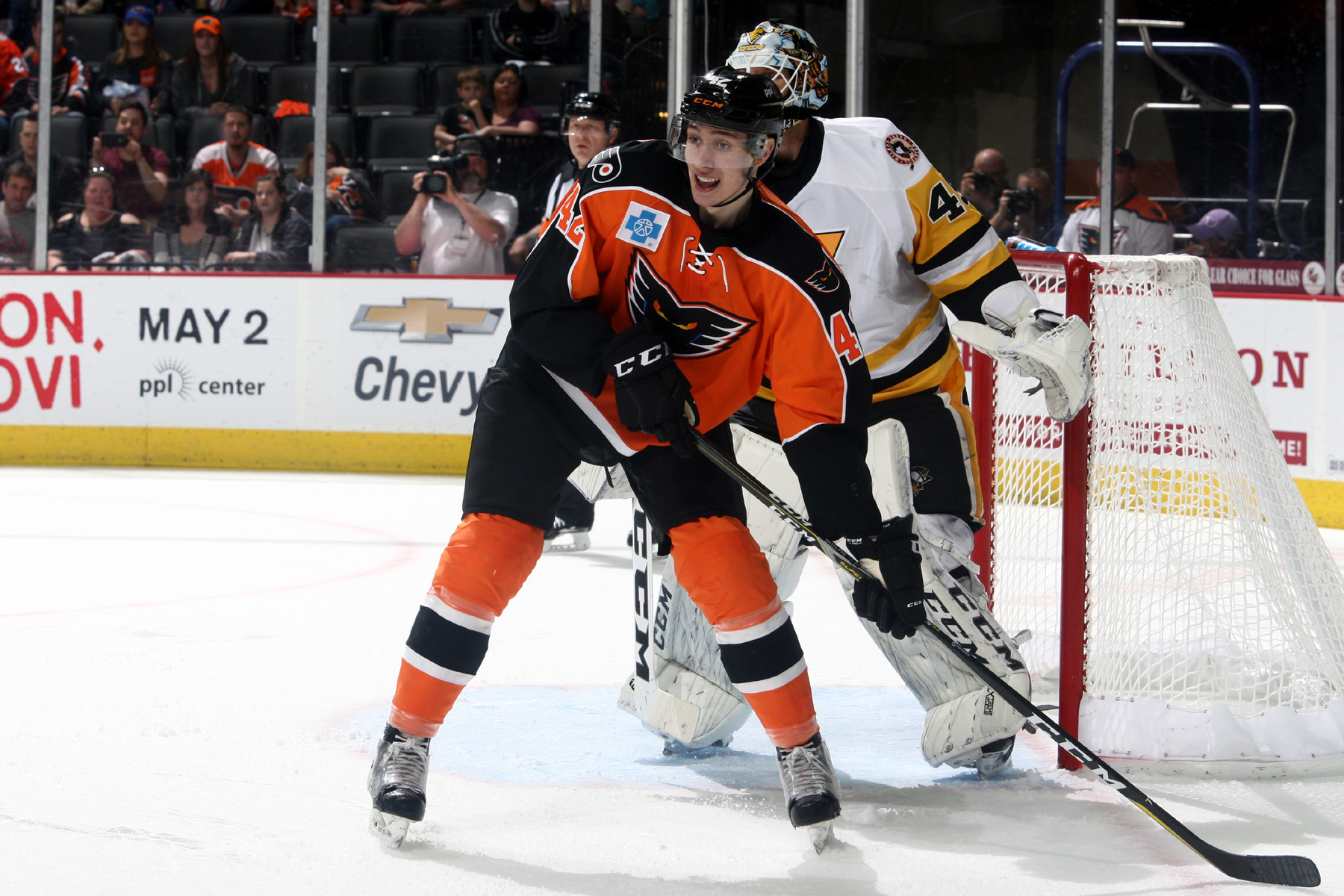 Coming off a career-best season that saw him post 50 goals and 32 assists for a total of 82 points with 105 penalty minutes and a plus-36 rating, Ratcliffe said he has changed the way he looks at the game and is more focused on what’s in front of him.  That change helped him to lead his team all the way to the Memorial Cup Final this past season and is something that he said will help him during his transition to the pro level.

“I’m really kind of a short-term goal guy,” Ratcliffe said.  “Whether it’s game by game or even shift by shift, it depends on where I’m playing and who I’m playing against.  That’s really something I focused on this year, to help myself stay in the moment, stay in the present and not look too far into the future.  Even now, just finishing a long season and going into next year, I’m more focused on the summer and what I can do to get better to help me prepare myself for the start of the season.”