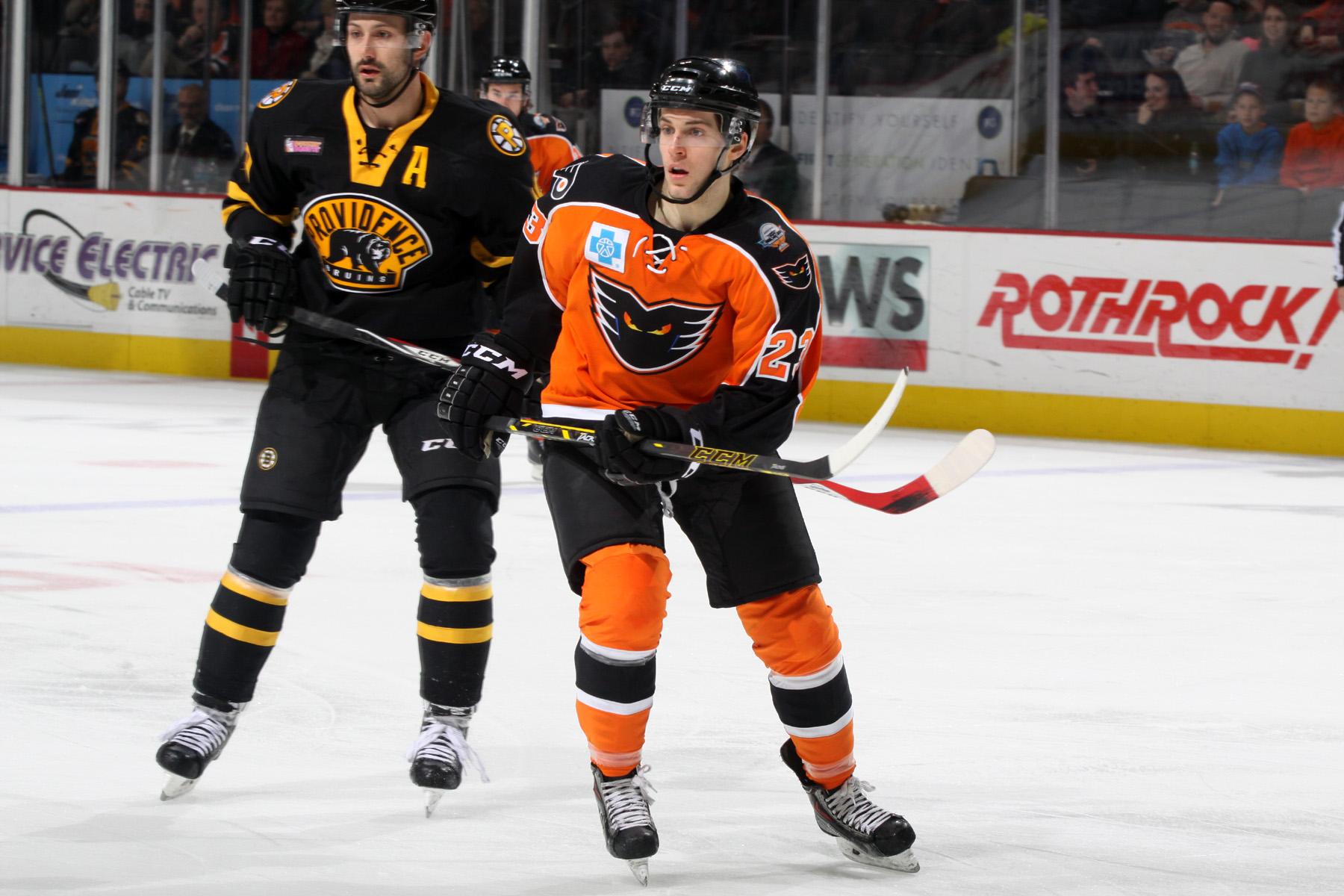 Providence, RI – Trailing by one goal with 3:30 left, winger Taylor Leier’s drive from the left circle blasted off the iron and away. The lucky break for the Bruins allowed the hosts to escape with a 5-3 win on Friday night after a last-minute empty-netter sealed matters.

Leier earlier in the game had scored his first of the season while Petr Straka struck for his third game in a row and veteran Tim Brent tallied in his second consecutive contest. Leier’s post-shot late in the game was actually the second time the Phantoms found the iron. Defenseman Davis Drewiske also struck one off the metal way back in the first period when the Phantoms were an inch away from drawing first blood.

The game was the opener of a home-and-home series between the new Atlantic Division rivals with both teams eagerly anticipating the Saturday night rematch at PPL Center. The evening also marked the opening of Lehigh Valley’s first “three-in-three” stretch of the season.

Providence was led by a pair of goals from Colby Cave including the late empty-netter while rookie talent Frank Vatrano tacked on his league-leading eighth goal of the season. Seth Griffith appeared in action for the first time this season and recorded three assists on the night. Veteran defenseman Matt Irwin scored the tie-braking goal in the third period.

Lehigh Valley was the better team five-on-five outscoring their opponents 2-1 in even-strength play and generating more chances. And the Phantoms had the early jump in the game outshooting the Bruins 9-1 in the opening minutes while Davis Drewiske hit the base of the post past the left skate of the Providence goalie Zane MacIntyre. But the Bruins power play produced at a 3-for-4 clip to prove as the difference-maker.

Anton Blidh scored late in the first period for Providence on a cross-ice feed by defenseman Tommy Cross allowing the Bruins to enter the first break with a 1-0 advantage.

Taylor Leier responded in the opening seconds of the middle period with a steal in the Providence zone and quick strike from the right circle. Tim Brent made the goal possible with his hard forecheck in the corner popping the puck free.

Providence would take advantage of back-to-back penalties late in the second period with power-play goals less than a minute apart by Vatrano and Cave.

But the Phantoms secured valuable momentum into the locker-room as Straka’s tally with 18 seconds remaining in the period cut the lead to 3-2. Andrew MacDonald’s blast from the left point was barely deflected by the glove of Providence goalie Zane MacIntyre. Nick Cousins with the first rebound was denied but Straka was right there to bury the second rebound offering on the extended scramble down low.

Leier offered a nifty assist for Tim Brent threading the needle to connect with the veteran in the left circle who connected on his power-play offering to even the score at 3-3 at 6:42 into the third. Cousins received his second helper of the night on the tally.

But a double-minor for high sticking by Samuel Morin would push the potent Providence power play into production again. This time it was Matt Irwin finding space in the slot to receive the feed from the creative Seth Griffth for the go-ahead tally.

Taylor Leier’s attempted tying tally with 3:30 left found the iron past MacIntyre and rang loudly away allowing the Bruins to hang on. Cave’s empty-netter with 50 seconds left concluded the scoring.

Jason LaBarbera made a couple of dazzling saves in the Lehigh Valley effort among his 24 total stops on 28 drives he faced.

Providence out shot the phantoms 29-28 in the game after the Phantoms showed the early jump with a 9-1 shot advantage to start not including the Drewiske drive off the post. The Bruins were 3-for-4 on the power play while the Phantoms were a perfect 1-for-1.

The Phantoms open a four-game homestand on Saturday in the rematch against the P-Bruins at PPL Center with game-time set for 7:05. Saturday is Magnet Schedule Night presented by Capital Blue Cross and Pita King.

Tickets for these and other upcoming Phantoms home games are available at PPLCenter.com or by calling (610) 347-TIXX (8499)