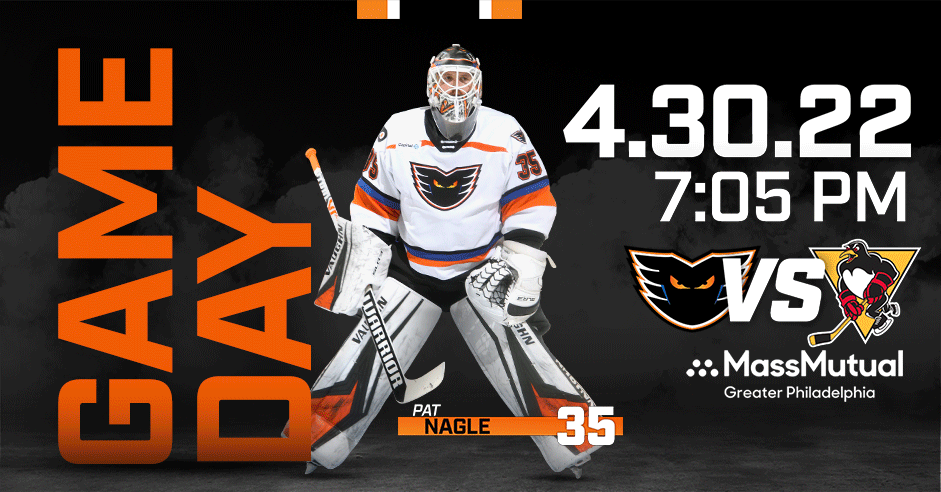 It’s the SEASON FINALE on a Phantoms GAMEDAY presented by MassMutual! The Lehigh Valley Phantoms play the last game of the season against the Wilkes-Barre/Scranton Penguins. The Force shall be with The Phantoms on Star Wars Night!!
Lehigh Valley (28-32-15) is 5-5-1 against the Penguins this year.

Thanks to all Phantoms Phans who supported us throughout the season and joined us at PPL Center in our return to a full season following the previous year’s COVID-shortened campaign.
The best is yet to come and we can’t wait to see you again!!

LAST TIME
Adam Johnson scored in the first period and Colin Felix dropped the gloves in his pro debut but Cole Fonstad struck for a pair of power-play goals for the visiting Cleveland Monsters as they pulled away late in a 6-1 win. Wit a depleted lineup hit with various injuries and recalls, the Phantoms rotated different defensemen into forward spots on various shifts during the game.

SEASON LEADERS
Goals – Cal O’Reilly (20)
Assists – Adam Clendening (36)
Points – Cal O’Reilly (51)
Shots – Adam Clendening (143)
Penalty Minutes – Garrett Wilson (113)
Wins – Felix Sandstrom (15)
Goals-Against Average – Pat Nagle (2.74)
PRO DEBUTS THIS WEEK
Tuesday – Will Riedell
Wednesday – Colin Felix
TRANSACTIONS
The Philadelphia Flyers have returned three players to the Lehigh Valley Phantoms in advance of tonight’s season finale: Felix Sandstrom (G), Linus Hogberg (D), Egor Zamula (D)
WILKES-BARRE/SCRANTON PENGUINS
The Phantoms are 5-5-1 against the Penguins this year. Wilkes-Barre/Scranton (35-32-8) will take on Hershey in the first round of the Calder Cup Playoffs next week. Alex Nylander has been a strong mid-season pickup for the Penguins scoring 14-16-30 (entering the weekend) since joining the team in December in a trade that brought him over from Rockford (Chicago Blackhawks). Seventh-rounder from Finland, Valtteri Puustinen, has scored 20-22-42 including five goals against the Phantoms. Goalie Louis Domingue (10-9-2, 2.41, .924) is up with Pittsburgh. Phantoms goalie Pat Nale has yet to play against the Penguins this season.

PHANTASTIC!
– The Phantoms now have seven players who have reached double digits in goals: Cal O’Reilly (20), Hayden Hodgson (19), Garrett Wilson (17), Max Willman (11), Wade Allison (10), Isaac Ratcliffe (10), Maksim Sushko (10)
– The Phantoms are 16-1-2 when scoring four or more goals. The Phantoms are 16-2-3 when leading at the second intermission.
– Six Phantoms players have made their NHL debuts this season: Max Willman, Felix Sandstrom, Linus Sandin, Isaac Ratcliffe, Hayden Hodgson, Linus Hogberg
– 12 players currently on the Flyers roster have come up through the Phantoms. Among those on the list are: Joel Farabee, Morgan Frost, Carter Hart, Oskar Lindblom and Scott Laughton