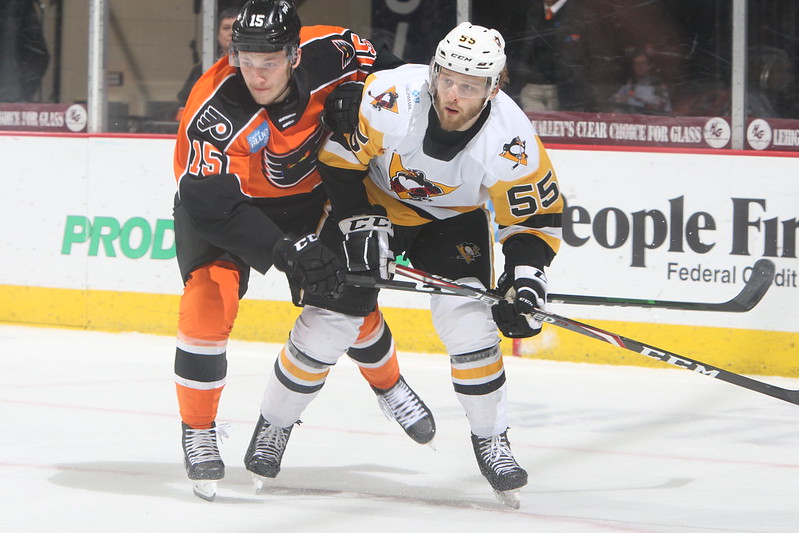 Welcome Back! – The Lehigh Valley Phantoms take to the ice for the first time in 330 days when they host the rival Wilkes-Barre/Scranton Penguins in a preseason game on Thursday, February 4 at 6:05 p.m. The last Phantoms game was March 11, 2020 also against the Penguins at PPL Center.

Teen Sensations – The Lehigh Valley Phantoms have previously had five players debut for the team as teenagers. Four of them are now with the Flyers. Robert Hagg, Nicolas Aube-Kubel, Oskar Lindblom, Isaac Ratcliffe, Joel Farabee are members of that select group.

Fond Memories – Tanner Lacyznski is undefeated at PPL Center even before he has played his first pro game. The 23-year-old center from Ohio State won back-to-back games in 2018 when the Buckeyes won the first-ever Midwest Regional NCAA Tournament games held in the Lehigh Valley. Laczynski was a sophomore and was named to the All-Regional team in leading Ohio State to its first Frozen Four appearance in 20 years. 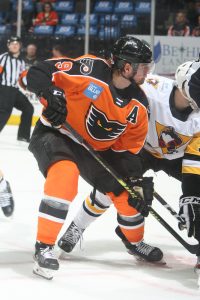 Head Start – Five Phantoms had been playing in Europe in the fall and winter before joining the Phantoms. Expect some of these players to potentially be faster out of the gates. David Kase was leading his team in scoring in the Czech Republic and was centering the top line for Karlovy Vary Energie where he scored six goals and 19 assists for 25 points in 27 games. Maksim Sushko was playing in his home country of Belarus with the Minsk Dynamo of the KHL. Defenseman Linus Hogberg, forward Linus Sandin and goalie Felix Sandstrom were all playing in Sweden.

Switching Sides – Garrett Wilson, 29, played for the Wilkes-Barre/Scranton Penguins and Pittsburgh Penguins for three seasons from 2016-19 and served as the captain and alternate captain in Wilkes-Barre. The familiar foe who has played in 84 career NHL games and over 400 AHL games spent last season with the Toronto Marlies.

Impressive Pedigree – Returning captain Cal O’Reilly, 34, is the AHL’s active scoring leader with 610 career points. He is 13th all-time with 484 assists and can become just the tenth in AHL history to reach the 500-assist milestone. Chris Mueller, 34, signed a professional tryout contract with the Phantoms and rates second of all active AHL players with 565 career points trailing only his new teammate, O’Reilly. Mueller has amassed 50 points in a season seven times and has won the Calder Cup twice (Texas in 2014 and Toronto in 2018).

In the Crease – The Phantoms have a trio of goaltenders including returning prospect Felix Sandstrom who primarily played with Reading in the ECHL last year. Eamon McAdam is a native of Perkasie near Quakertown. The Penn State product is the first from near the Lehigh Valley region to become a full-time professional hockey player. Zane McIntyre spent most of his career with the Providence Bruins but last year played for Utica and Binghamton. McIntyre has been friends with Alex Lyon since childhood and the two played at rival high schools in northern Minnesota.

Moving Up – Several familiar names are on the Philadelphia Flyers or on the team’s Taxi Squad roster to open the season. Taxi Squad players have included  Andy Andreoff, Samuel Morin, Alex Lyon, Nate Prosser and Carsen Twarynski although some of those players have made appearances with the Flyers so far this season as well.
Get Well Soon – Forwards Wade Allison and Isaac Ratcliffe have injuries and thus remain on the Flyers roster on the injured reserve. Goalie Kirill Ustimenko had hip surgery and is unavailable for the rest of the season.

Upcoming – The Lehigh Valley Phantoms open the regular season on Saturday at 4:00 p.m. at the rival Hershey Bears. That marks the beginning of four straight on the road to commence the 2021 campaign. The Phantoms return to PPL Center on Saturday, February 20 against the Binghamton Devils for Lehigh Valley’s seventh home Opening Night at PPL Center.