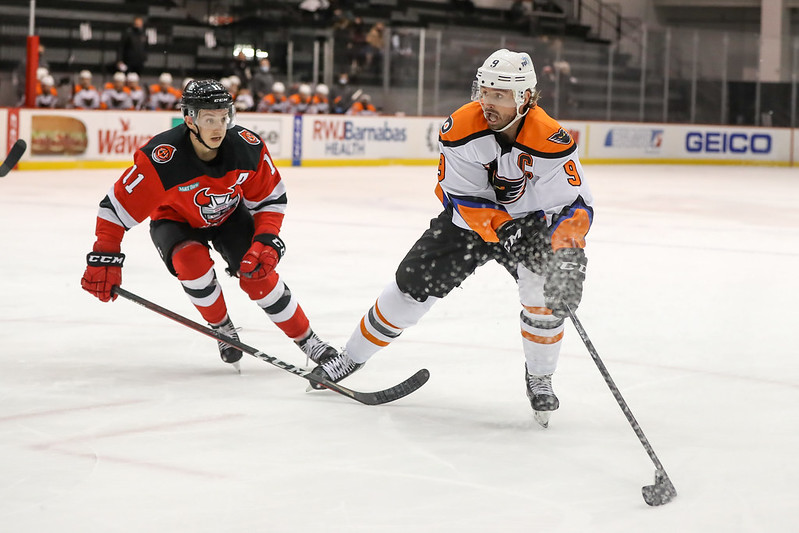 Newark, NJ – Rookie defenseman Linus Högberg scored his first career goal in North America but the Binghamton Devils eventually prevailed in the shootout in a 2-1 decision over the Lehigh Valley Phantoms on Monday night in Newark, NJ.

Lehigh Valley (12-3-3) had its four-game win streak snapped but continued its point streak which was extended to five. The Phantoms also have points in eight of their last nine games at 7-1-1.

Binghamton (4-8-5) won against the Phantoms for just the second time in six tries. Both Devils wins against Lehigh Valley have come after regulation and the Phantoms are 4-0-2 against Binghamton this year.

Tyson Foerster scored in the shootout for a second game in a row again turning to a slick backhand move. And Ryan Fitzgerald also scored in the post-overtime competition. But all three Devils shooters buried their chances including Fabian Zetterlund who blasted the winner to the upper-90 with a sizzling shot past the glove of Zane McIntyre (8-1-2).

Marian Studenic (3rd) scored on a shorthanded breakaway just past the midway mark of the second period to give the Devils a 1-0 lead. That happened a few minutes after a strong 5-on-3 kill for the Phantoms and some terrific saves for Zane McIntyre had kept the game deadlocked.

Tyson Foerster thought he was ready to score his fifth goal in the last three games on a big one-timer from the left circle in the second period but somehow Gilles Senn miraculously lunged across to get the upper part of his stick on Foerster’s big blast in one of the top saves of the season.

The Phantoms finally broke through just over four minutes into the third with the 22-year-old Swedish product, Linus Högberg, taking a pass at center point and identifying his opening to walk to the high slot. He ripped a laser from just a little bit on the left side when he saw daylight on the stick-side of Senn. Ryan Fitzgerald and Chris Bigras assisted on his first Phantoms’ goal that had tied the game at 1-1.

McIntyre continued to dazzle and made a number of sparkling saves to keep the game tied. Lehigh Valley took a penalty early in the overtime but worked through the Devils’ 4-on-3 power play and even had a strong shorthanded chance for Connor Bunnaman who carried past the left dot for a sharp-angle drive that went off the shoulder of Senn and barely was kept out.

The Phantoms have played a league-leading nine overtime games this season and are 5-2 in overtime decisions and 1-1 in shootouts.

The Phantoms return to PPL Center with a weekend homestand that will include increased capacity allowance to 25%. Lehigh Valley hosts the Hershey Bears on Saturday, April 10 at 7:05 p.m. and then hosts the Binghamton Devils on Sunday, April 11 at 5:05 p.m. Tickets for all upcoming home games are available at PhantomsHockey.com and PPLCenter.com