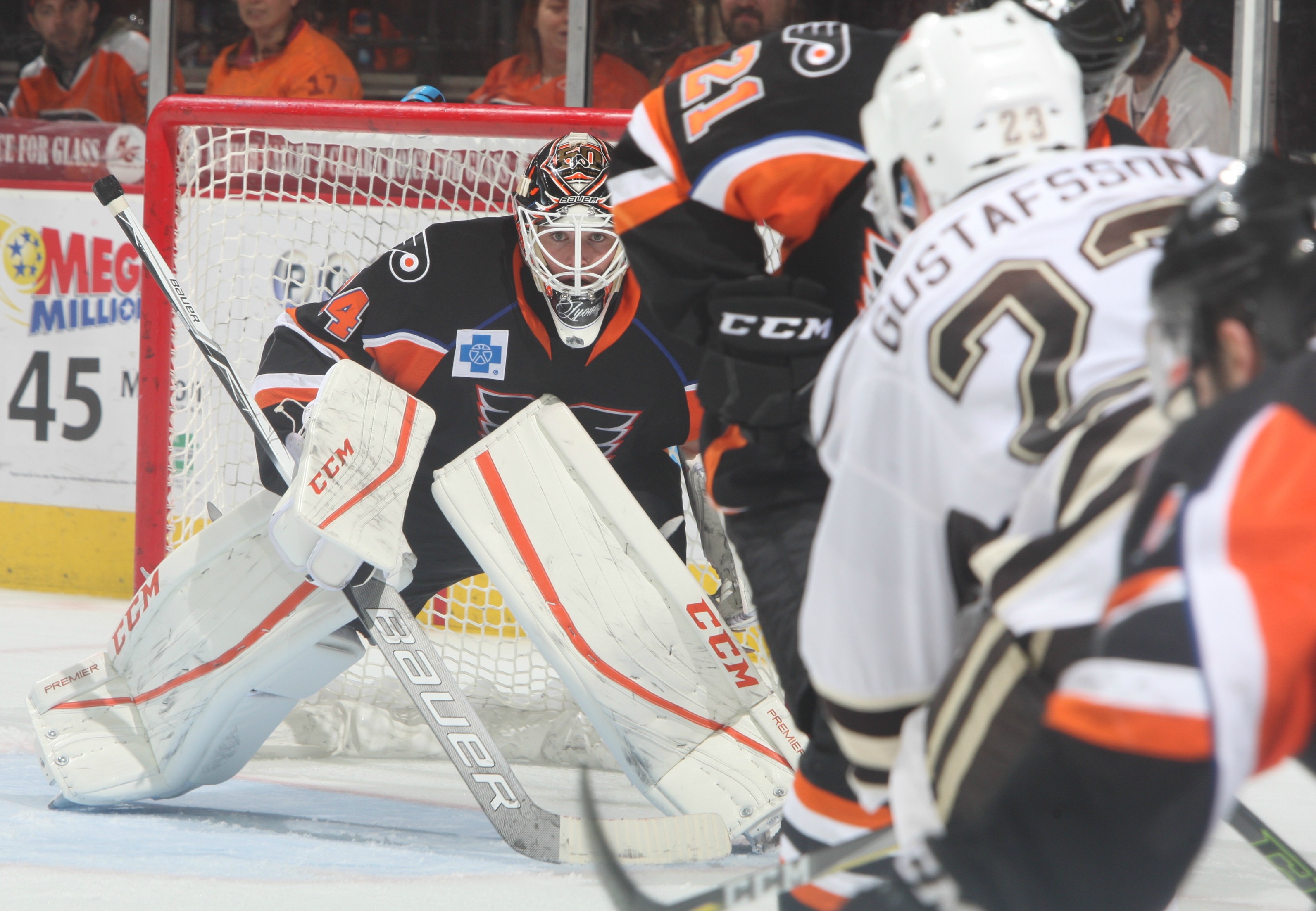 Lehigh Valley, PA – Calder Cup Playoff hockey hit the Lehigh Valley and PPL Center for the first time ever Friday evening as the Lehigh Valley Phantoms opened their best-of-five division semifinals series against the rival Hershey Bears. Friday’s contest featured everything that exemplifies the excitement of postseason hockey – tremendous intensity, raucous fans, bone-crushing checks and stellar goaltending. In fact, the netminding was so impressive on both sides, the series opener featured just one goal as visiting Hershey was able to escape downtown Allentown with a 1-0 overtime victory. 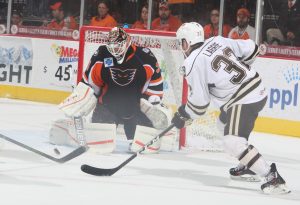 The Bears now lead the best-of-five series 1-0 with an opportunity for the Phantoms to level the rivalry series on Saturday with Game 2 at PPL Center.

Making his professional playoff debut, Lehigh Valley’s Alex Lyon was tremendous between the pipes turning aside 19 of the 20 Bears’ shots that came his way. Lyon used stellar positional play coupled with his incredible agility to thwart one Hershey scoring chance after another. Meanwhile, Hershey’s Pheonix Copley earned the win with a 32-save shutout.

Nathan Walker landed the only conversion Friday evening when he notched his first goal of the playoffs 7:38 into overtime. 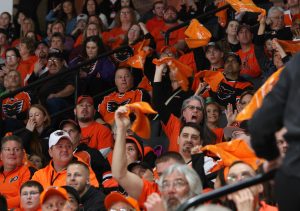 Friday’s contest marked just the 12th time in AHL history a Calder Cup Playoffs game has been scoreless after 60 minutes of play.

Friday’s game not only marked the first playoff game in Lehigh Valley Phantoms history but it also signaled the Phantoms’ return to AHL postseason action for the first time since the Philadelphia Phantoms squared off against the Bears in April of 2009.

The atmosphere within PPL Center was electric even before the game’s opening face-off when a rousing video presentation coupled with a stunning lights display throughout the arena brought the orange-clad fans to their feet in a frenzy.

While the opening period didn’t feature any scoring, it certainly showcased plenty of action as the intensity of postseason action manifested itself in a series of high-speed hits and a bevvy of offensive chances for the Phantoms. All told, Lehigh Valley produced 15 shots on goal in the opening frame in addition to maybe the best scoring opportunity of the first frame when Cole Bardreau came cruising down the right wing only to see his wrist shot offering deflect off the post. 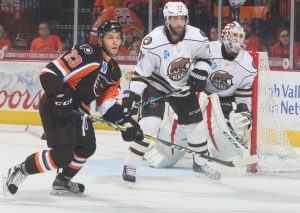 Neither side found the back of the net in the second or third periods despite a combined 46 shots in regulation.

Hershey then broke the scoreless deadlock just over seven minutes into overtime when a point show by Tyler Lewington produced a rebound atop the goal crease that Walker converted into his first goal of the postseason. Stanislav Galiev earned the secondary assist on the game-winning tally netted 7:38 into overtime.

All told, the Phantoms out shot the Bears 32-20. Neither power play factored into the decision as Lehigh Valley went 0-for-4 with the man-advantage while Hershey failed to score in its three power play chances.

The Phantoms continue their best-of-five division semifinals series with the Bears on Saturday with Game 2 set to begin at 7:05 p.m. at PPL Center. Fans are once again encouraged to wear orange to the game as the Phantoms “Orange Out” PPL Center. A limited number of tickets remain for Saturday’s postseason showdown and can be secured online by clicking HERE.

Game 3 will then be held at the Giant Center in Hershey on Wednesday, April 26 but Phantoms fans are encouraged to head to Chickie’s & Pete’s at PPL Center for an Official Phantoms Watch Party.