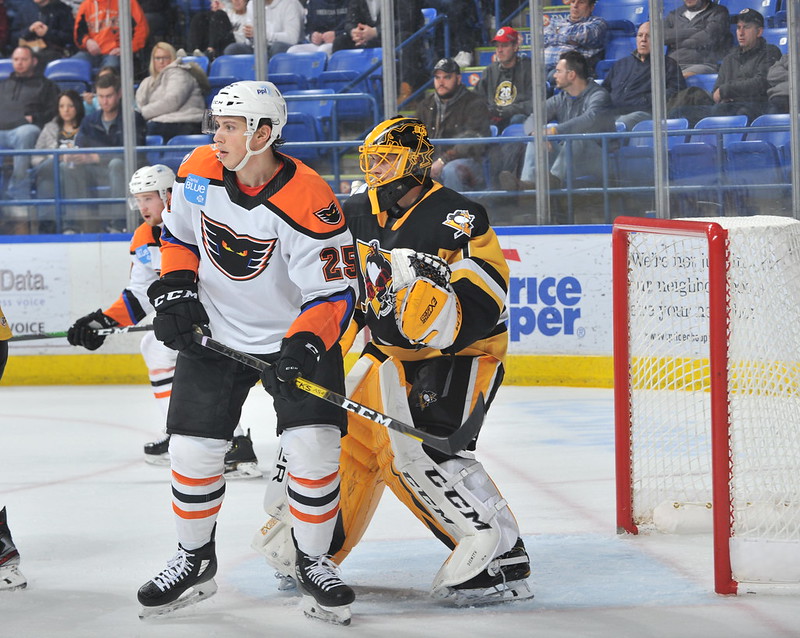 Wilkes-Barre, Pa. – Gerry Fitzgerald (3rd) struck early for the Lehigh Valley Phantoms but host Wilkes-Barre/Scranton battled back from behind to post a 4-2 rivalry win on the strength of a hat trick by Anthony Angello.

Matt Strome (2nd) also scored for the Phantoms with his power play strike while Alex Lyon stopped 23 of 26 shots between the pipes for Lehigh Valley (12-14-5). 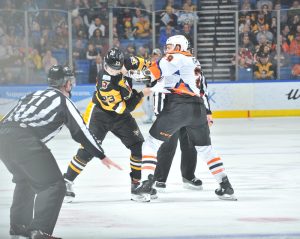 Wilkes-Barre/Scranton (16-12-4) held on at the end with some strong stops by former Phantom Dustin Tokarski who came on in relief of Casey DeSmith in the third period. With a pulled goalie for a 6-on-5-attack, Greg Carey had some strong tries that were repelled by the veteran goaltender to preserve the decision.

The Phantoms raced out of the gate with their fastest goal to start a game this season when they rushed forward off a defensive zone faceoff win. Maksim Sushko flew up the left-wing and offered a sharp-angle shot that handcuffed DeSmith setting up Fitzgerald in front to bang home the rebound. Carsen Twarynski also received an assist on the play.

Lehigh Valley almost doubled its lead on the power play when Chris Bigras went to the net front and accepted a Twarynski feed down low. Bigras put on a little move and beat DeSmith over the glove but banged his backhand attempt off the crossbar.

The Penguins evened the score in the opening minutes of the second period after some sustained pressure in the Phantoms zone. A point-shot that went wide was pushed back out in front from the end-boards setting up Angello’s first of the night at 3:31 into the second period for a 1-1 tie.

The large contingent at Mohegan Sun Arena was energized even more when the two squads’ respective tough guys agreed to drop the gloves a couple minutes later. Lehigh Valley’s Kurtis Gabriel and Wilkes-Barre/Scranton’s Jamie Devane dropped the gloves against each other for a second time this year. 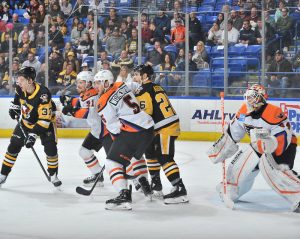 Both teams traded quality chances for the rest of the second period looking to break the 1-1 tie. Connor Bunnaman was in the low slow on the power play with back-to-back point-blank chances that he banged off Casey DeSmith. And an Andy Welinski point-shot that was whistled wide came out to the newest Phantom, Max Willman, on the right of the cage who was fought off by DeSmith as well.

The Penguins broke the tie right after a Phantoms penalty had expired when Angello shot from the high slot past the glove of Lyon who appeared to be screened by Kevin Roy at the net-front. The go-ahead goal at 1:26 of the third period provided the Penguins with a 2-1 advantage.

Lehigh Valley had a big opportunity to rebound right back with a power play of their own just a few seconds later. But instead it was Pierre-Oliver Joseph rushing up the left-wing shorthanded and shooting off the left shoulder of Lyon to set up his teammate Jake Lucchini on the backdoor-rebound tap-in for a short-handed strike just 31 seconds after their tie-breaking goal.

Matt Strome answered at the end of a Phantoms power play at 3:31 into period getting in front and deflecting a Chris Bigras point-shot to pull Lehigh Valley back to within a goal at 3-2. Both of Strome’s goals this season have come on deflections on the power play and have both been scored against Wilkes-Barre.

The Phantoms pushed hard at the end with their extra attacker but Tokarski and the Penguins ultimately sealed the victory when Angello converted on his hat-trick, empty-netter with 52 seconds left to provide for the 4-2 margin.

The Phantoms return to PPL Center Saturday night against the Utica Comets and Sunday afternoon against the Hershey Bears for the last games of calendar year 2019. Saturday night includes a 2020 Phantoms Player Calendar giveaway for the first 6,500 fans in attendance.

Next Time Out: The Phantoms come back to PPL Center on Saturday, December 28 against the Utica Comets on Phantoms Calendar Night followed by the team’s first home matinee of the season on Sunday, December 29 at 3:05 p.m. in a rematch against the Hershey Bears.