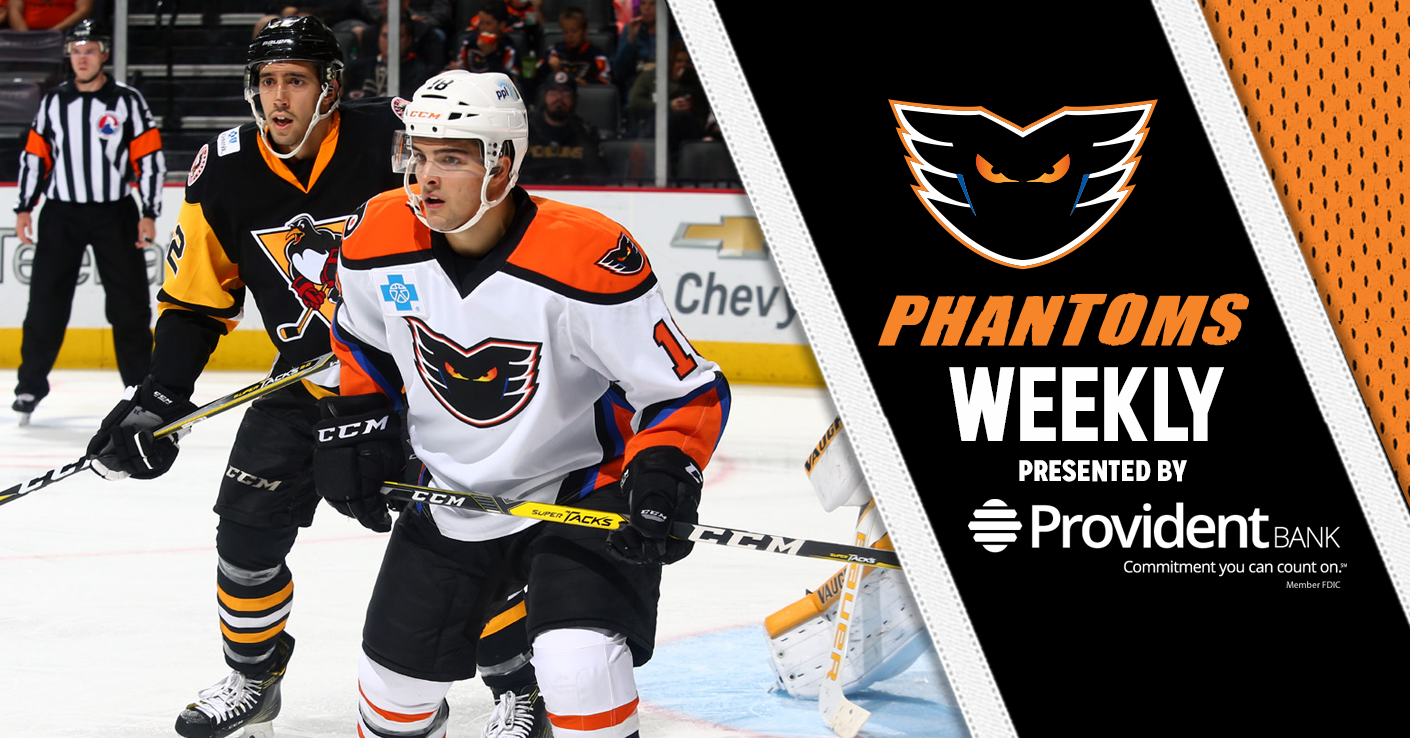 Winners of six of their last seven games, the red-hot Lehigh Valley Phantoms (7-2-0-1, 15 pts., 0.750 points pct., T-1st Atlantic Division) look to carry the momentum from an impressive October into the start of November, which kicks off with three games this weekend, including highly-anticipated contests at PPL Center this Friday, November 3 and Sunday, November 5. 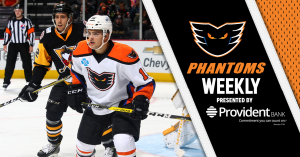 The Phantoms return to action this Friday, November 3 when they welcome the rival Wilkes-Barre/Scranton Penguins (6-2-0, 12 pts., 0.750 points pct., T-1st Atlantic Division) back to downtown Allentown. The Penguins won both of their games last weekend in extending their current winning streak to five consecutive games. After a 3-2 victory at home on Friday over the Hershey Bears, Wilkes-Barre/Scranton earned a 5-2 road triumph in Bridgeport over the Sound Tigers on Saturday. During the team’s recent surge, the Penguins have outscored their opposition 23-12 and have won three straight games against Atlantic Division foes.

Friday’s contest will be the third of 12 total meetings during the 2017-18 regular season between the Phantoms and Penguins. After Wilkes-Barre/Scranton claimed the series opener with a 5-0 win at Mohegan Sun Arena on October 13, Lehigh Valley exacted a little revenge just 24 hours later in a 3-2 triumph at PPL Center. 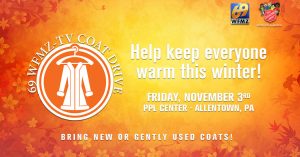 Friday’s game features the 69 WFMZ-TV Coat Drive where fans are encouraged to bring new or gently used coats to the game. All donations will benefit the Salvation Army Foster and Children’s Services. Tickets for Friday’s clash at PPL Center are available now by clicking HERE.

Lehigh Valley then hits the road on Saturday, November 4 as the team heads up to the Floyd L. Maines Veterans Memorial Arena in Binghamton for a 7:05 p.m. showdown with the Devils. Binghamton (4-2-1, 9 pts., 0.643 points pct., 2nd North Division) split a pair of games last weekend suffering a 4-1 loss to the Providence Bruins on Friday before capturing a 2-1 regulation win at home over the Springfield Thunderbirds on Saturday.

Saturday’s game will be the second of six total meetings this year between the Phantoms and Senators after Lehigh Valley claimed the series opener with a 4-3 win in Binghamton back on October 21. 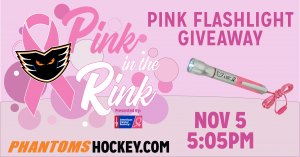 The Phantoms then cap this week’s action on Sunday, November 5 when they welcome the Toronto Marlies to PPL Center for the first and only time this season for a 5:05 p.m. clash in downtown Allentown. Toronto (6-3-0, 12 pts., 0.667 points pct., 1st North Division) also split a pair of games last weekend earning a 4-2 win at the Syracuse Crunch on Saturday before being handed a 3-2 loss at home to the Laval Rocket on Saturday. The Marlies enter the week having won four of their last six games overall and will visit Laval on Wednesday and Hershey on Saturday before invading PPL Center on Sunday.

Sunday’s game is Pink in the Rink presented by the American Cancer Society and features a Pink Flashlight Giveaway FREE to the first 6,500 fans in attendance. Only a limited number of tickets remain for Sunday’s game and can be purchased online by clicking HERE. 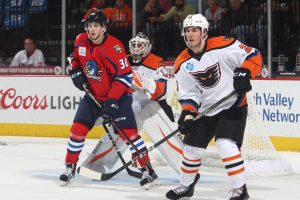 Greg Carey (4th) blasted home the game-winning goal in overtime last Wednesday as the Phantoms rallied for a 3-2 triumph over the Springfield Thunderbirds in front of 6,121 fans inside PPL Center. Mike Vecchione (2nd) and Colin McDonald (1st) also found the back of the net for Lehigh Valley as the Phantoms earned their fourth win in downtown Allentown in the season’s opening month.

Alex Lyon earned the win between the pipes for Lehigh Valley after turning aside 25 of Springfield’s 27 total shots. Lehigh Valley’s special teams played a big part in the victory as the Phantoms’ power play went 2-for-9 while the team’s penalty kill successfully thwarted all six of Springfield’s man-advantage opportunities.

Danick Martel (8th, 9th) scored twice and Chris Conner added a pair of assists as the Phantoms completed a sweep of their home-and-home series with the Springfield Thunderbirds thanks to a 5-2 triumph in front of 5,614 fans inside MassMutual Center. Will O’Neill (1st), Cole Bardreau (1st) and Oskar Lindblom (1st) also converted for Lehigh Valley in front of goaltender Dustin Tokarski who earned his second win since joining the Phantoms thanks to a solid 26-save performance. 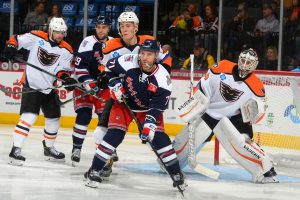 Danick Martel tallied his team-leading 10th goal of the season while Philippe Myers and Oskar Lindblom each added a goal and an assist as the Phantoms were handed a 5-4 setback to the visiting Hartford Wolf Pack in front of 7,726 fans inside PPL Center. Mark Alt (2nd) also scored for Lehigh Valley as the Phantoms saw nine different skaters record at least one point in the decision.

Lehigh Valley’s power play converted twice for the second time in the week as the Phantoms’ man-advantage went 2-for-5 in ending the week having tallied five power play markers in just three games (5-for-18).

Service Electric’s TV2 Sports will be broadcasting live each of the Phantoms’ 33 home games throughout the 2017-2018 regular season. If you can’t make it out to the rink, be sure to catch all the exciting action live in HD quality with Steve Degler, Todd Fedoruk, Doug Heater and Kristi Fulkerson! Pre-game coverage begins with “Phantoms Front and Center” 30 minutes before puck drop.