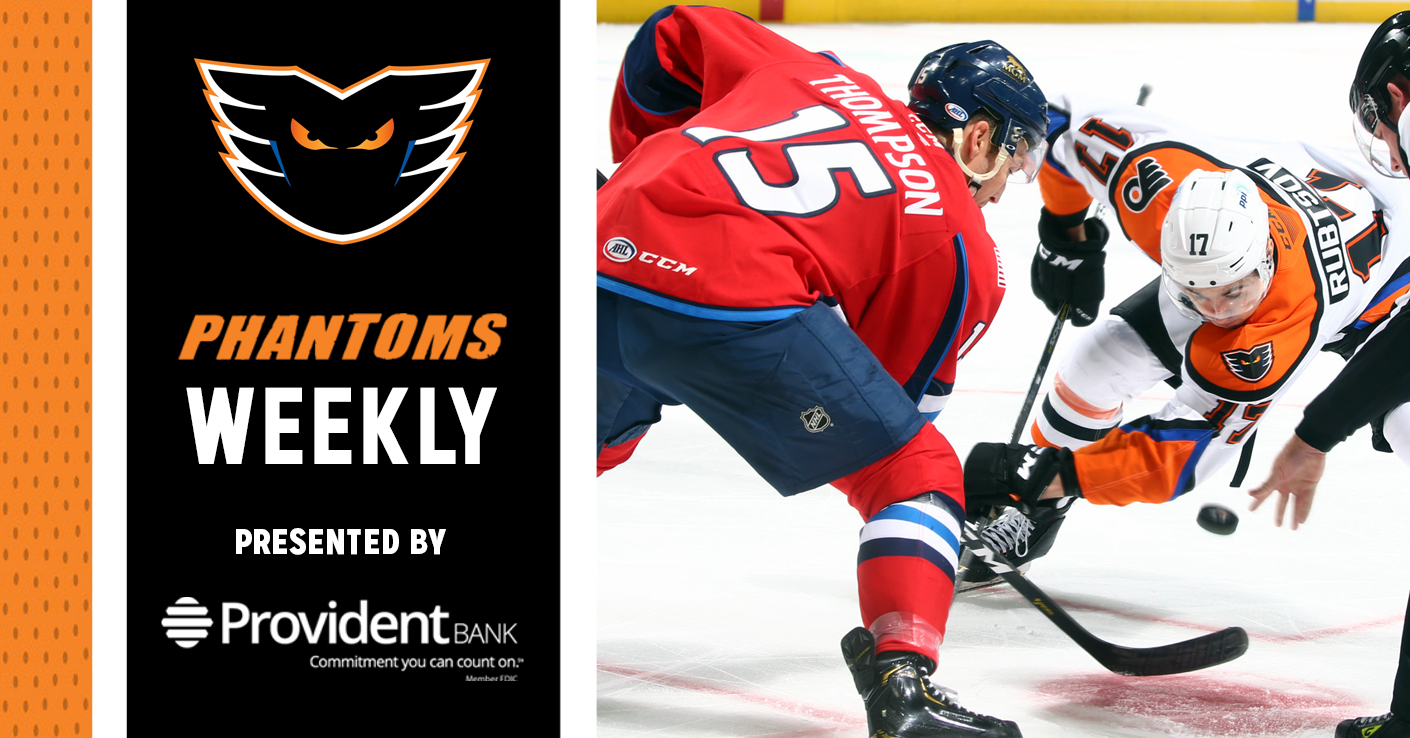 The Lehigh Valley Phantoms traveled to Binghamton for the last game of their season long six-game road swing this past Friday to take on the Devils for the first game of a home-and-home weekend set. Despite Binghamton taking a 2-0 lead into the first intermission, Lehigh Valley fired back with three consecutive goals off the sticks of David Kase, German Rubtsov and Mikhail Vorobyev to take a 3-2 lead.  The Devils would add a late goal, at the 16:42 mark of the third period, to force overtime and although the Phantoms controlled the majority of the play in extra time, they fell 4-3 after Binghamton defenseman Colton White found the back of the net at the 3:25 mark in overtime.

Vorobyev, in only his second game with the Phantoms this season, finished the night with two points (1G-1A) — the sixth multi-point game of his professional career — which included a highlight reel assist that sprung fellow Russian forward Rubtsov on a shorthanded opportunity that he scored on.

On Saturday, the Phantoms returned home to PPL Center in downtown Allentown for the first time in 14 days to host the Devils for the back half of the home-and-home series.  Largely a scoreless contest through nearly the first 43 minutes of play, the Devils would net a pair of goals just 2:43 apart in order to take a 2-0 lead.  The Phantoms finally broke the goose egg on the board — with the goalie pulled — when Mike Vecchione fed T.J. Brennan on the point for a one-time shot that was tipped in by Colin McDonald to make it a 2-1 game at the 13:59 mark of the third period. 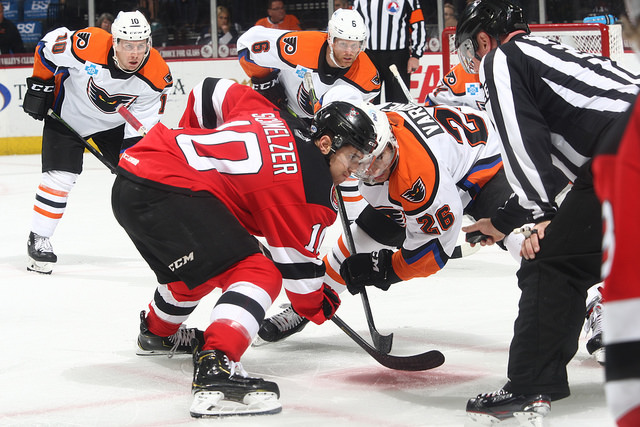 The Phantoms will continue their four-game home stand on Friday night when they host the Springfield Thunderbirds for the second time this season.  In two prior meetings this season, the Phantoms hold a split record of 1-1 against the Thunderbirds which includes a 5-4 shootout victory.  As of Tuesday, Springfield holds second place in the Atlantic Division with just a single regulation loss in 10 games this season.  Thunderbirds’ forwards Henrik Borgstrom (1G-3A) and Harry Zolnierczyk (1G-3A) each have four points in two games against the black and orange this season while the team already has six players with double-digit point totals.

On the Phantoms side of things, defenseman T.J. Brennan (1G-1A) and forward Phil Varone (1G-1A) currently lead the charge with two points each against the T-Birds.  Similarly to Springfield, those same two players are also the top two on the team in total points this season.  Varone leads the Phantoms with 15 (4G-11A) while Brennan holds second place with 14 (4G-10A).

Friday night is also Superhero Night featuring an appearance by your friendly neighborhood Spider-Man, who will be available for photos on the concourse. We’re calling on all fans to come out and help cheer on the Phantoms as they attempt to foil the plans of the evil Thunderbirds!  Limited tickets remain for Friday’s contest against Springfield, you can purchase yours HERE.

On Saturday, Lehigh Valley will take on the first place team in the Atlantic Division as they rekindle their rivalry with the Charlotte Checkers.  Heading into this weekend with a 10-1-0-0 record, Charlotte is currently on a five-game unbeaten streak stretching back to October 24.  Since the start of the season, the Checkers have beaten four different North Division opponents seven times, but currently hold a 3-1-0-0 record against Atlantic Division opponents.

During the 2017-18 season, the Phantoms and Checkers split eight meetings right down the middle, each posting a 4-4-0-0 record in the process.  Forwards Greg Carey (3G-3A), Nic Aube-Kubel (2G-4A) and Phil Varone (1G-5A) tallied six points each for a total of 18 (6G-12A) in the contests against the Checkers a season ago.

Current Lehigh Valley defenseman Philip Samuelsson will get his first crack against his former team in Saturday night’s match up.  The 27-year-old blueliner appeared in all 76 contests for Charlotte this past season and tallied 21 points (4G-17A) as well as the league’s best plus-minus rating of plus-48. 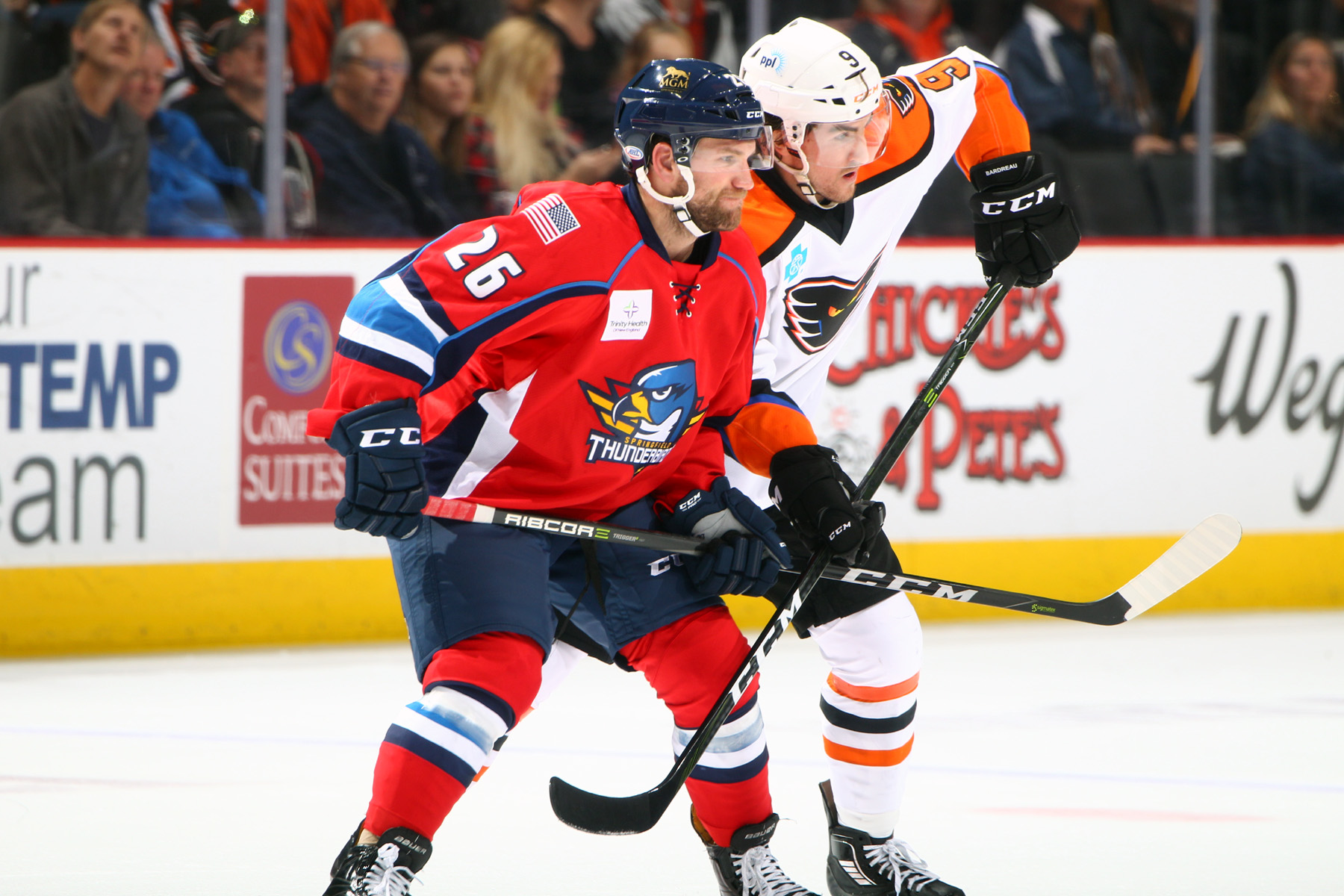 The Lehigh Valley Phantoms netted two extra-attacker goals in the final 6:01 of the third period — including the game-tying goal with just 4.5 seconds left — of Saturday night’s game against the Devils.  This marks the second time this season that Head Coach Scott Gordon’s gamble of pulling the goalie has produced two goals.  The first, on October 13 against the Springfield Thunderbirds, saw David Kase and Greg Carey net goals late in the third en route to a 5-4 shootout victory.