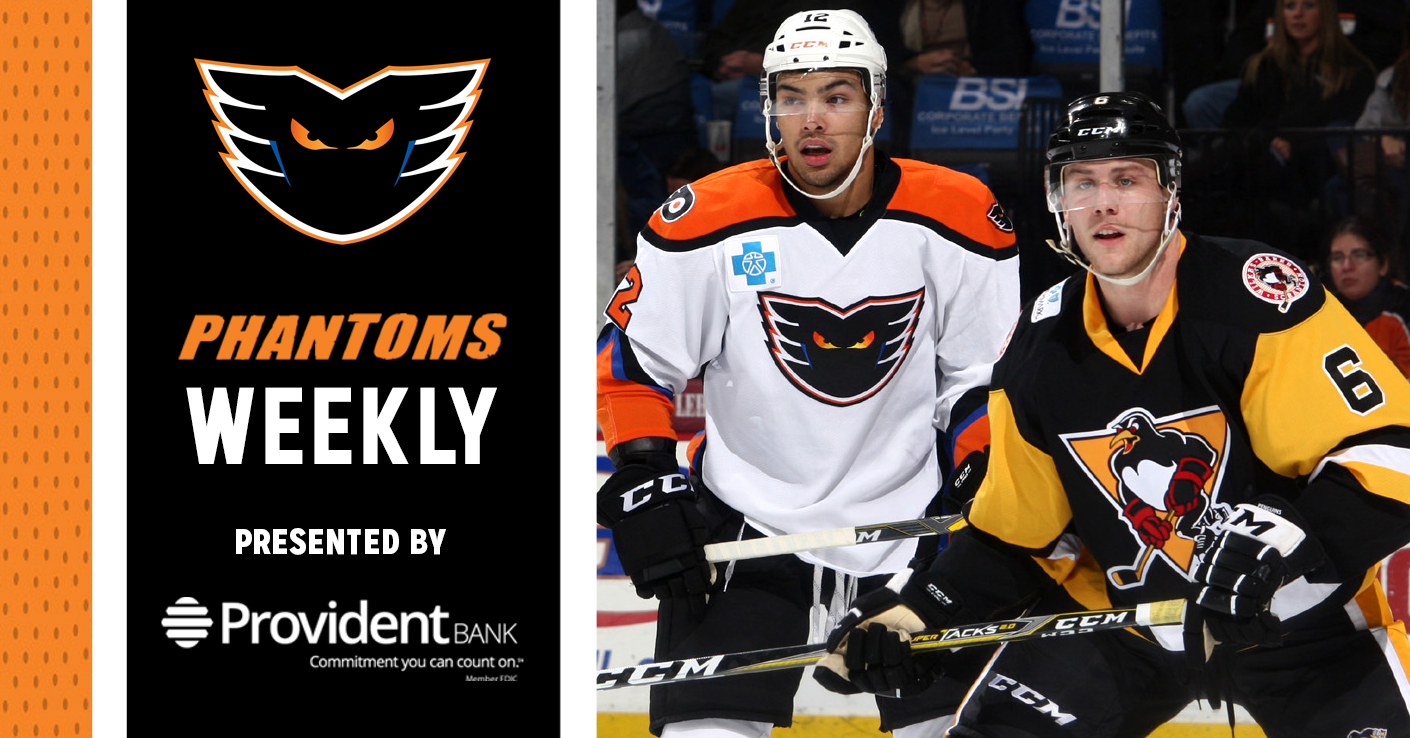 The Lehigh Valley Phantoms took to the ice last weekend for a home-and-home series against the Springfield Thunderbirds beginning with a game inside of PPL Center on Friday night.  Friday night’s contest was largely marked by a number of penalties — eight in total — that put the Phantoms behind the eight ball, and on the penalty kill, for the majority of the game.  By night’s end, Lehigh Valley had surrendered five power-play goals to the T-Birds which resulted in a 7-0 loss.

Rookie goaltender Carter Hart, who saw his second start of the season, was pulled from the game in favor of Anthony Stolarz in the second period.

On Saturday, the Phantoms hit the road for their first away game of the season to complete the home-and-home set with the Thunderbirds.  Despite Springfield finding the back of the first, the Phantoms battled back and tied the game when Cole Bardreau netted his first of the season as he picked up a loose puck, skated in on the left side and scored shorthanded.  Lehigh Valley would later take the lead early in the second period thanks to a goal from defenseman T.J. Brennan, his first of the season.  Another Springfield goal would again tie the game, this time at 2-2, heading into the third period.

After killing off the remainder of a double minor to begin the period, the Phantoms again found themselves behind after a pair of goals scored by Blaine Byron and Paul Thompson — just 22 seconds apart — quickly made it 4-2 in favor of the opposition.  With under three minutes remaining in the game, rookie David Kaše sparked Lehigh Valley’s comeback when he potted the first professional goal of his career thanks to a centering feed from Chris Conner.  His goal made it 4-3 with just 2:23 left in the game.  Exactly two minutes later, at the 19:37 mark of the third period, Greg Carey would would find a rebound off of a Philip Samuelsson shot and bury it to tie the game at four.

A scoreless overtime period would give way to the shootout and thanks to goals from Taylor Leier and German Rubtsov, as well as some timely saves from goaltender Anthony Stolarz, the Phantoms prevailed to bring home the 5-4 victory. 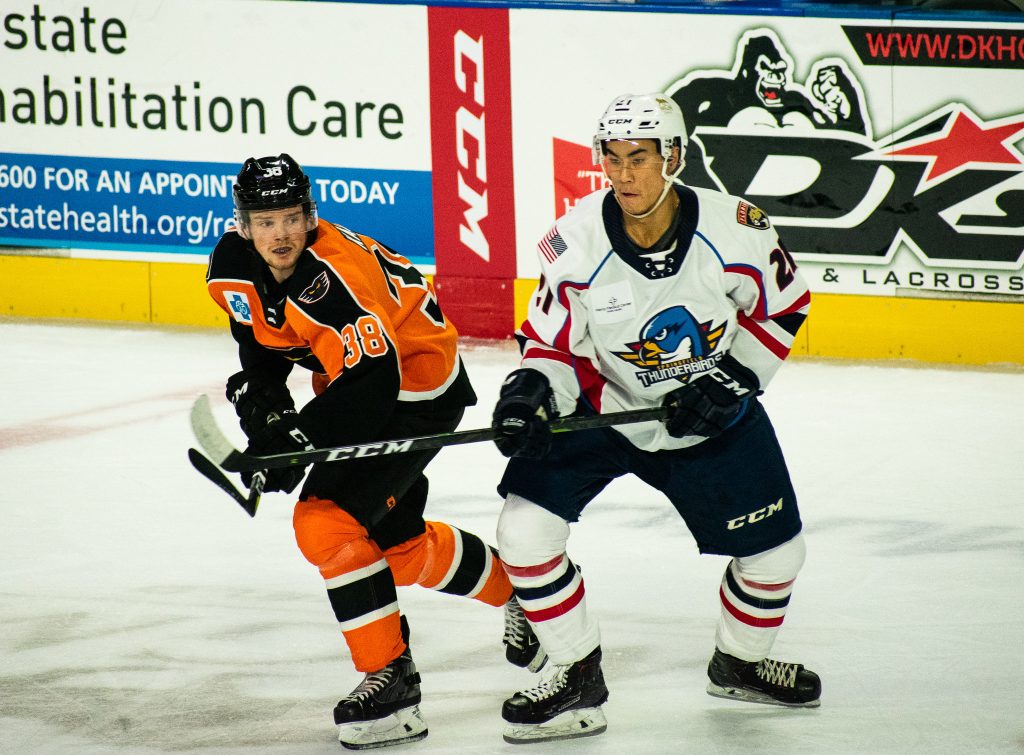 The Phantoms will welcome the rival Wilkes-Barre/Scranton Penguins into PPL Center for the first of six meetings in downtown Allentown this season on Friday night.  Having battled for the Atlantic Division crown against each other the last two seasons, the two teams will again likely be in a race at the top of the standings.  Last season, the Phantoms produced an impressive 7-4-0-1 record against Wilkes-Barre/Scranton, but, in 12 total match ups, saw the results against the Penguins decided by a single goal in six of those contests.

As of Tuesday, the Penguins remain one of only three unbeaten teams in the Atlantic Division with a 3-0-0-0 record.  After dispatching the Thunderbirds in their first game of the season, the Pens traveled to Cleveland where they topped the Monsters twice this past weekend.  Rookie center Anthony Angello leads the Penguins with two goals this season, but is tied for first in points scored at three with captain Garrett Wilson (1G-2A) and defenseman Stefan Elliott (3A).

Friday night is also Hat Trick or Treat Night featuring a spooky Halloween theme and a Phantoms Ball Cap Giveaway for the first 6,500 fans in attendance thanks to Service Electric Cable TV & Communications.  Tickets for Friday night’s contest inside of PPL Center are available online, so be sure you get yours by clicking HERE.

Lehigh Valley will travel up the Pennsylvania Turnpike to complete their home-and-home series with Wilkes-Barre/Scranton on Saturday night. The game will be the first of five that the Phantoms will play on the road to round out the end of October and the first of six total away games before returning to the confines of PPL Center.

Chris Conner led the charge for the Phantoms against the Penguins during the 2017-18 season having tallied 11 total points (5G-6A) in 12 games.  Just two seasons ago, Taylor Leier produced five points (3G-2A) in just seven games against Wilkes-Barre/Scranton, and while he’s still searching for his first point of the 2018-19 season, a familiar foe may be just what he needs to get going.

After their opening night loss, the Sound Tigers have only managed to produce a single win in three additional tilts this season.  Currently led by forward Michael Dal Colle, who has a goal and four assists on the season, Bridgeport will look to rebound from two losses against Rochester this past weekend. 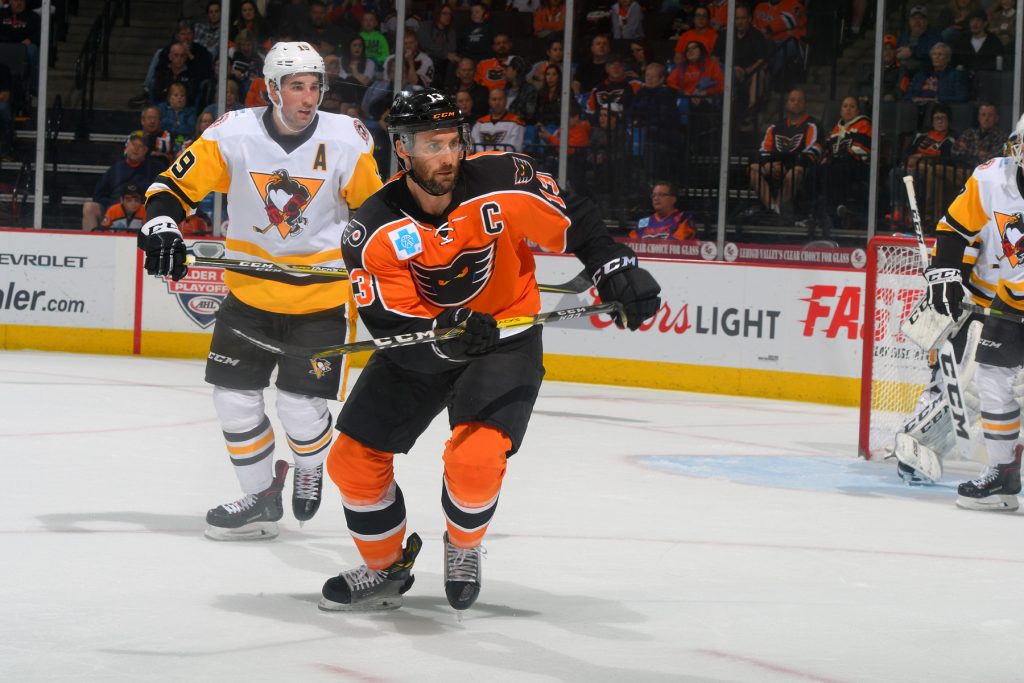 Rookie Forward David Kaše tallied his first professional point with an assist on German Rubtsov’s goal on October 6 against the Sound Tigers.  This past weekend, Kaše netted the first goal of his pro career and helped spark the Phantoms comeback late in the third period of Saturday’s 5-4 victory over the Springfield Thunderbirds.  The 21-year old out of Kadan, Czech Republic, is now tied for third on the team with two points this season (1G-1A).

The Lehigh Valley Phantoms scored two goals against the Thunderbirds with under three minutes remaining in Saturday night’s game and went on to eventually win in the shootout by a score of 5-4.  During the 2017-18 season, the Phantoms managed to come back 13 times — including six times in the third period — from deficits on the scoreboard.

Goaltender Anthony Stolarz made 27 saves on 31 shots in Saturday night’s game to earn his first victory with the Lehigh Valley Phantoms since March 26, 2017.