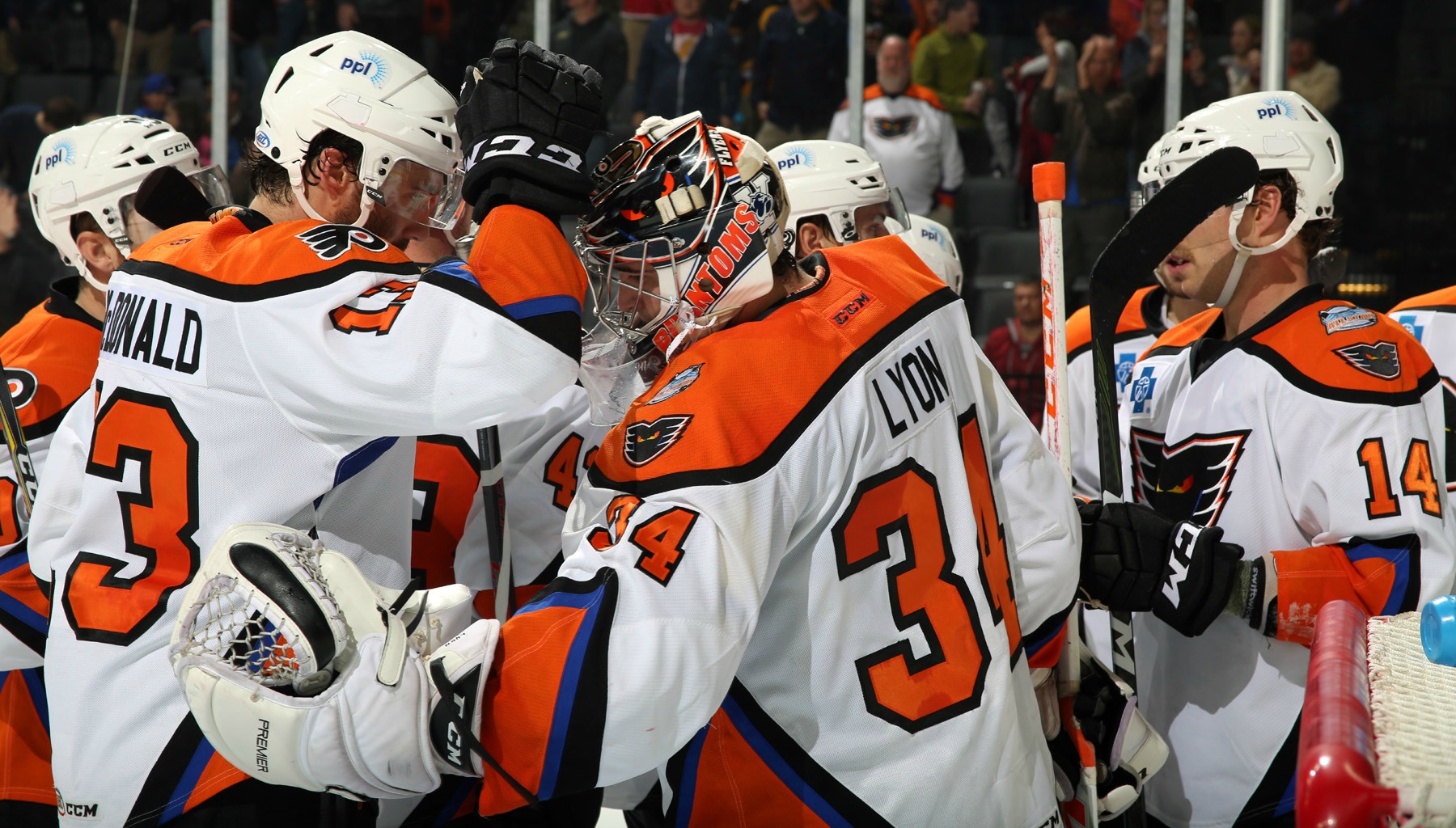 Winners of 13 of their last 16 games overall, the red-hot Lehigh Valley Phantoms (15-6-1, 31 pts., T-2nd Atlantic Division) return to action for three games this week, including a weekend series with the Rochester Americans that kicks off a season-high six-game home stand at PPL Center. Entering the week, no team in the entire AHL boasts more wins (15) and standings points (31) than the Phantoms.

Lehigh Valley’s week begins on Wednesday, December 7 when the team travels to the Onondaga County War Memorial Arena in Syracuse for a 7:00 p.m. showdown with the Crunch.Syracuse (12-6-0-2, 26 pts., 1st North Division) claimed five of a possible eight standings points during a busy four-game week last week. The Crunch opened the week by splitting a two-game series at the St. John’s IceCaps before returning home to capture a 4-0 win over Rochester on Saturday and eventually closing the week with a 4-2 setback at the Hershey Bears on Sunday. Syracuse enters the week having won four of its last six games overall.

Wednesday’s contest will mark the first of two total meetings during the 2016-17 regular season between the Phantoms and Crunch. Following Wednesday’s clash, the two sides won’t meet again until a March 15 clash at PPL Center. 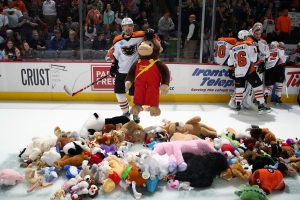 The Phantoms then return to PPL Center this weekend for a two-game series with the Americans, which kick starts a season-high six-game home stand in downtown Allentown. Rochester (9-12-0-1, 19 pts., 6th North Division) snapped a six-game losing by taking two of three games last week. The Americans opened the week with a 2-1 victory at the Utica Comets followed by a 3-2 triumph over the Toronto Marlies before closing the week with a 4-0 loss at Syracuse. Despite the two wins last week, Rochester still enters the week having dropped seven of its last nine games overall.

Friday’s game at PPL Center will feature a Youth Winter Hat Giveaway presented by PPL Corporation where the first 2,500 kids 14 and under will receive a FREE Phantoms youth winter hat courtesy of PPL Corporation. Then, on Saturday, December 10, it’s the highly-anticipated Teddy Bear Toss presented by Dan’s Camera City where fans are encouraged to bring new teddy bears and stuffed animals to the game and throw them onto the ice when the Phantoms score their first goal. All teddy bears/stuffed animals will then be donated to Valley Youth House for distribution to children throughout the Lehigh Valley.

A limited number of tickets remain for Friday and Saturday’s games and can be purchased online by clicking HERE.

Jordan Weal tallied a goal and an assist and Alex Lyon turned in an impressive 25-save performance as the Phantoms completed a sweep in their season series with the Toronto Marlies with a 4-1 win at Ricoh Coliseum. Chris Conner, Samuel Morin and Colin McDonald also found the back of the net for Lehigh Valley while the Phantoms’ power play continued to impress with a strong 2-for-7 performance. 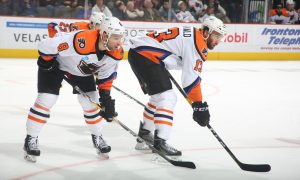 T.J. Brennan, Jordan Weal and Robert Hagg all scored for the Phantoms and Lehigh Valley’s power play accounted for two more conversions but it wasn’t enough as the Hershey Bears were able to hang on for a 4-3 win in front of 7,181 fans at PPL Center. Christian Thomas (2 goals, assist), Travis Boyd (goal, assist) and Liam O’Brien (2 assists) paced the offensive effort for visiting Hershey while Joe Cannata (23 saves) outdueled Alex Lyon (19 saves) between the pipes.

Jordan Weal netted the game winner in overtime as the Phantoms exacted a little revenge over their in-state rivals with a 3-2 victory aginst the Bears at Giant Center in Hershey. T.J. Brennan and Colin McDonald also scored for Lehigh Valley while the Phantoms’ power play produced a pair of conversions for the third consecutive game. Goaltender Alex Lyon worked himself back into the win column thanks to an impressive 34 saves on 36 Bears shots. With the victory, the Phantoms evened their season series (2-2) with rival Hershey. 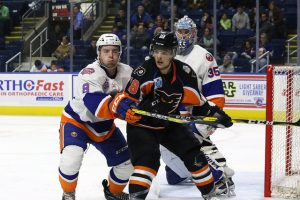 Danick Martel potted the eventual game-winning goal 7:40 into the third period as the Phantoms claimed their 10th road victory of the season with a 3-2 win over the Bridgeport Sound Tigers. Taylor Leier also scored for Lehigh Valley while captain Colin McDonald converted his team-leading 11th goal of the season. Making his first start with the Phantoms this season, goaltender Martin Ouellette earned the victory between the pipes with 19 saves on 21 Bridgeport shots.

Service Electric’s TV2 Sports will be broadcasting live all of the Phantoms’ 29 remaining regular season home games. If you can’t make it out to the rink, be sure to catch all the exciting action live in HD quality with Steve Degler, Todd Fedoruk, Doug Heater and Kristi Fulkerson! Pre-game coverage begins with “Phantoms Front and Center” 30 minutes before puck drop. And don’t miss “Phantoms – Breaking the Ice” every Monday from 7:00 – 7:30 p.m. throughout the season live at Chickie’s & Pete’s at PPL Center!

Tickets for each of the Phantoms’ 29 remaining regular season home games are available now online at pplcenter.com, by calling 610-347-TIXX [8499] or in-person at the PPL Center Box Office [7th & Hamilton].