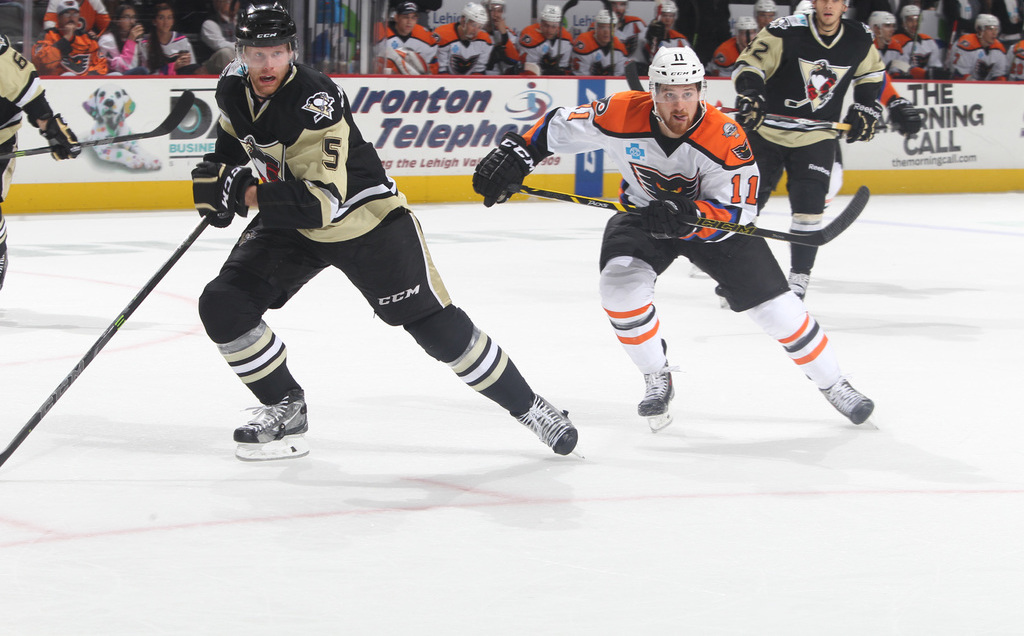 The Lehigh Valley Phantoms continue their push towards the 2015 Calder Cup Playoffs this week as the team prepares for a busy three-game weekend. 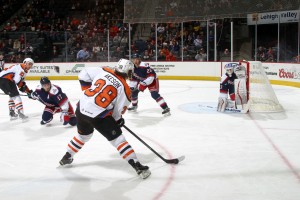 The Phantoms begin their busy weekend on Friday when Lehigh Valley heads to the XL Center in Hartford for its fourth and final meeting of the 2014-2015 regular season with the Wolf Pack. The Phantoms are 0-1-2 against Hartford this season and are coming off a 5-4 overtime setback to the Wolf Pack at PPL Center on February 21st in the most recent collision. Zack Stortini leads all active Lehigh Valley skaters in scoring in the season series with four points (3 goals, assist) while Hartford’s Oscar Lindberg and Dylan McIlrath have paced the Wolf Pack with four points each through the first three meetings.

Lehigh Valley (29-24-6-1, 65 pts.) enters the week in sole possession of third place in the East Division and is currently eight points back of Springfield for the eighth and final playoff spot in the Eastern Conference with three games-in-hand on the Falcons. The Phantoms won all three games last week and have now claimed five of their last seven tilts overall and six of the club’s last seven road outings. Meanwhile, Hartford (33-21-5-3, 74 pts.) is currently second among the five teams in the Northeast Division and seventh overall in the Eastern Conference. Like the Phantoms, the Wolf Pack won all three games last weekend as Hartford was able to snap a six-game winless skid with victories over Springfield, Binghamton and Wilkes-Barre/Scranton. 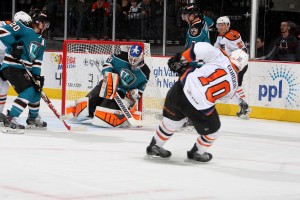 Lehigh Valley then concludes its five-game road trip on Saturday as the Phantoms invade the DCU Center in Worcester for their fourth and final meeting of the year with the Sharks. Lehigh Valley is 1-2 against the Sharks this season and was handed a 4-3 setback on November 5th in the only prior get-together in Worcester. The Sharks also claimed the most recent meeting with a 4-3 triumph at PPL Center on February 4th. In between, Lehigh Valley earned a convincing 4-0 shutout win against Worcester on November 21st in downtown Allentown. Worcester’s Matt Taormina leads all active skaters in the season series with four points (all assists) while Taylor Leier and Robert Hagg lead all active Phantoms with three points apiece through the first three showdowns.

Worcester (32-22-4-2, 70 pts.) enters the week fourth among the five teams in the Atlantic Division and just three points back of Springfield for the final postseason berth in the Eastern Conference. The Sharks claimed one of their two outings last week but are in the midst of a slump that has seen the club claim just two of its last seven contests. Worcester will host the St. John’s IceCaps (Wednesday) and Hershey Bears (Friday) before welcoming Lehigh Valley to town. 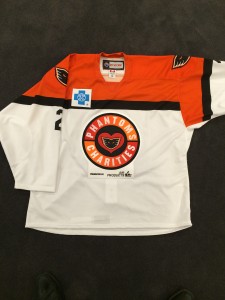 Finally, the Phantoms wrap up their busy weekend on Sunday as the team returns to the friendly confines of PPL Center for a rivalry showdown with the Wilkes-Barre/Scranton Penguins. Sunday’s collision marks the eighth of 12 total meetings this season between the Pennsylvania state rivals and the first of five collisions over the final four weeks of the regular season between the Phantoms and Penguins. Lehigh Valley is 4-2-1 against Wilkes-Barre/Scranton this season and has won three straight meetings with the Penguins, including a dramatic 5-4 shootout triumph at Mohegan Sun Arena on February 14th in the most recent clash.

Sunday’s contest features a Youth Street Hockey Stick Giveaway for the first 3,000 kids in attendance ages 14 and under. It’s also Charities Night at PPL Center as the Phantoms will don specialty Phantoms Charities jerseys, which will then be auctioned off after the game. A limited number of tickets for Sunday’s rivalry showdown are available now at pplcenter.com, by calling 610-347-TIXX (8499) or in-person at the Mealey’s Furniture Box Office at PPL Center (701 Hamilton).

Wilkes-Barre/Scranton (36-20-2-4, 78 pts.) enters the week fourth overall in the Eastern Conference and just three points back of Hershey for the top spot in the East Division. The Penguins have been on a bit of a tear lately having won four of their last five games and 11 of 14 overall since February 8th. Wilkes-Barre/Scranton will visit the Syracuse Crunch on Friday and will host the Binghamton Senators on Saturday before traveling to Lehigh Valley to close out a three-game weekend of their own.

Nick Cousins netted his second hat trick of the season and landed the hat trick-capping conversion with the first penalty shot attempt in Lehigh Valley Phantoms history as the Phantoms outlasted the Toronto Marlies 4-3 at Ricoh Coliseum. Cousins’ herculean effort was part of a four-point night for the 21-year-old center as Lehigh Valley completed a sweep in its season series with Toronto. Andrew Gordon also registered three assists for the Phantoms in the triumph.

Rob Zepp backstopped the victory with 28 saves on 31 shots while Lehigh Valley went 2-for-4 on the power play converting multiple man-advantage markers for the 13th time this season. Jason Akeson garnered the other conversion for the Phantoms while Adam Comrie chipped in a pair of assists.

Scott Laughton tallied the game winner in the shootout and Rob Zepp recorded 33 saves in regulation before denying all three Providence shootout attempts as the Phantoms outlasted the Bruins 2-1 at Dunkin’ Donuts Center. Adam Comrie converted in regulation for Lehigh Valley as the Phantoms improved to an impressive 6-1 in shootouts and 18-6-6-1 in one-goal games this year.

With the win, Lehigh Valley earned a split in its season series with Providence while the Phantoms produced a power play conversion for the fourth consecutive game.

The Phantoms earned their third consecutive victory and the team’s fifth triumph over its last seven games overall on Saturday thanks to a come-from-behind 4-2 win at Webster Bank Arena in Bridgeport. After the Sound Tigers netted the first two goals in the game, Lehigh Valley responded with a vengeance landing the game’s final four conversions, including third-period tallies from Adam Comrie, Jason Akeson and Oliver Lauridsen.

Nick Cousins began the comeback effort with his team-leading 21st goal of the year just prior to the midway point of the second period. Both Cousins and Akeson produced a goal and an assist while Anthony Stolarz backstopped the resilient effort with 38 saves on 40 Bridgeport shots. The victory was Lehigh Valley’s sixth over its last seven road outings.

Service Electric’s TV2 Sports will be broadcasting live all of the Phantoms’ nine remaining regular season home games. If you can’t make it out to the rink, be sure to catch all the exciting action in high definition with Steve Degler and former Flyers and Phantoms goaltender Brian Boucher! Pre-game coverage begins with “Phantoms Front and Center” with Doug Heater and Kristi Fulkerson 30 minutes before puck drop. And don’t miss “Phantoms – Breaking the Ice” every Monday from 7:00 – 8:00 PM throughout the season live at Chickie’s & Pete’s (701 Hamilton Street)!