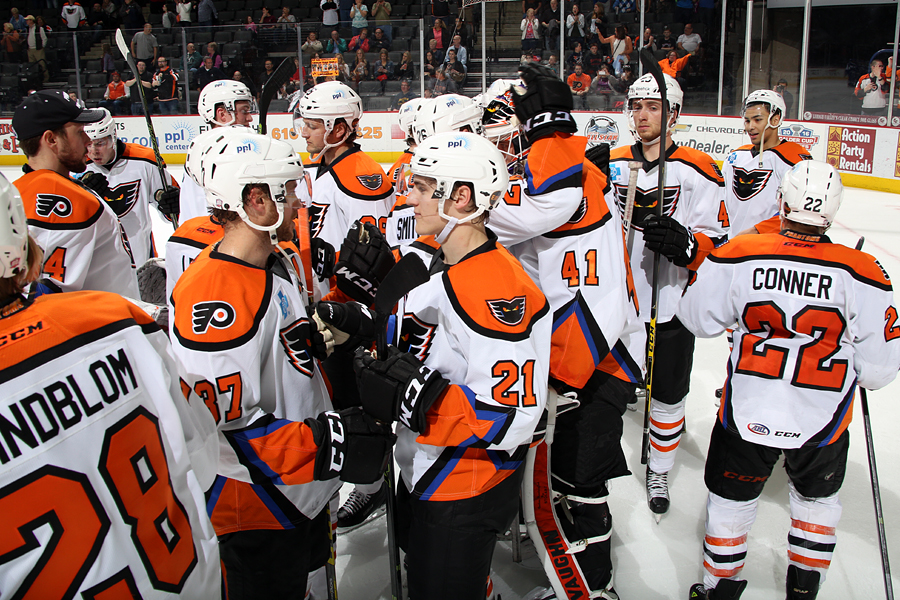 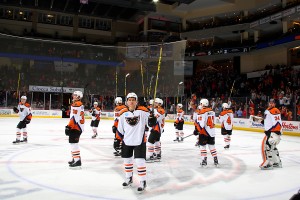 With Sunday’s 5-2 triumph over the Syracuse Crunch at PPL Center in the team’s regular season finale, the Phantoms closed their 20th Anniversary Season by winning seven of their final 10 games. During that run, Lehigh Valley outscored its opposition 34-20 and allowed just three power play goals in 52 man-down scenarios (94.2 percent). Defensively, Lehigh Valley surrendered three or more goals against in a single game just three times over the final 10 outings while offensively, the club deployed a balanced attack as 17 different skaters accounted for the team’s final 34 goals of the season. 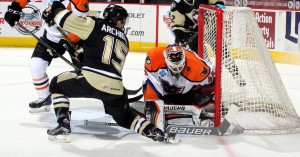 All-Star goaltender Anthony Stolarz turned in his fourth 40-save performance of the season and Robert Hagg chipped in his fifth goal of the season but the visiting Wilkes-Barre/Scranton Penguins were able to escape downtown Allentown with a 2-1 win over the Phantoms in front of 8,433 fans at PPL Center. Tim Brent and Adam Comrie assisted on Hagg’s conversion while Stolarz’s impressive night featured double-digit saves in all three periods.

Friday’s game capped the 12-game regular season series between Lehigh Valley and Wilkes-Barre/Scranton as the Phantoms closed the year with a 5-6-1 mark against the Penguins.

Dalton Smith and Steven Swavely each converted their second goals of the season but the Hershey Bears were able to earn a come-from-behind 4-2 victory at Giant Center in Lehigh Valley’s final road game of the 2015-16 season. Robert Hagg, Adam Comrie and Oskar Lindblom collected assists on the Phantoms’ goals while Anthony Stolarz turned in another solid performance between the pipes as he denied 28 of Hershey’s 31 total shots.

Saturday’s contest capped the 12-game season series between Lehigh Valley and Hershey as the Phantoms finished the year 6-6 against their in-state rivals. 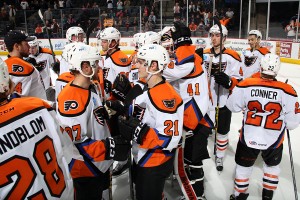 Highly touted defensive prospect Travis Sanheim netted his first professional goal before Danick Martel landed his team-leading 22nd conversion as the Phantoms closed the 2015-16 regular season with a 5-2 victory over the Syracuse Crunch at PPL Center. Tim Brent (10th), Steven Swavely (3rd) and Nic Aube-Kubel (2nd) also found the back of the net for Lehigh Valley as the Phantoms closed the regular season winning seven of their final 10 games.

Making his fifth consecutive start in goal, Anthony Stolarz earned the win with 19 saves on 21 shots while Lehigh Valley’s penalty kill denied seven of Syracuse’s eight power plays in closing the season by successfully stopping 49 of its opposition’s 52 man-advantage opportunities over the season’s final 10 games.

The Phantoms are coming off their 20th Anniversary Season and second campaign in the Lehigh Valley playing at the state-of-the-art PPL Center. Established in 1996, the Philadelphia Phantoms spent their first 13 seasons at the Spectrum before re-locating to Glens Falls, New York in 2009 where the team spent the next five seasons as the Adirondack Phantoms. A new era of Phantoms hockey began in the fall of 2014 when the Lehigh Valley Phantoms began play at the state-of-the-art PPL Center. Through 18 incredibly successful campaigns, the Phantoms have captured two Calder Cup Championships (1998, 2005), two Conference Championships (1998, 2005), two Regular Season Titles (1996-97, 1997-98) and four Division Championships (1996-97, 1997-98, 1998-99, 2003-04).