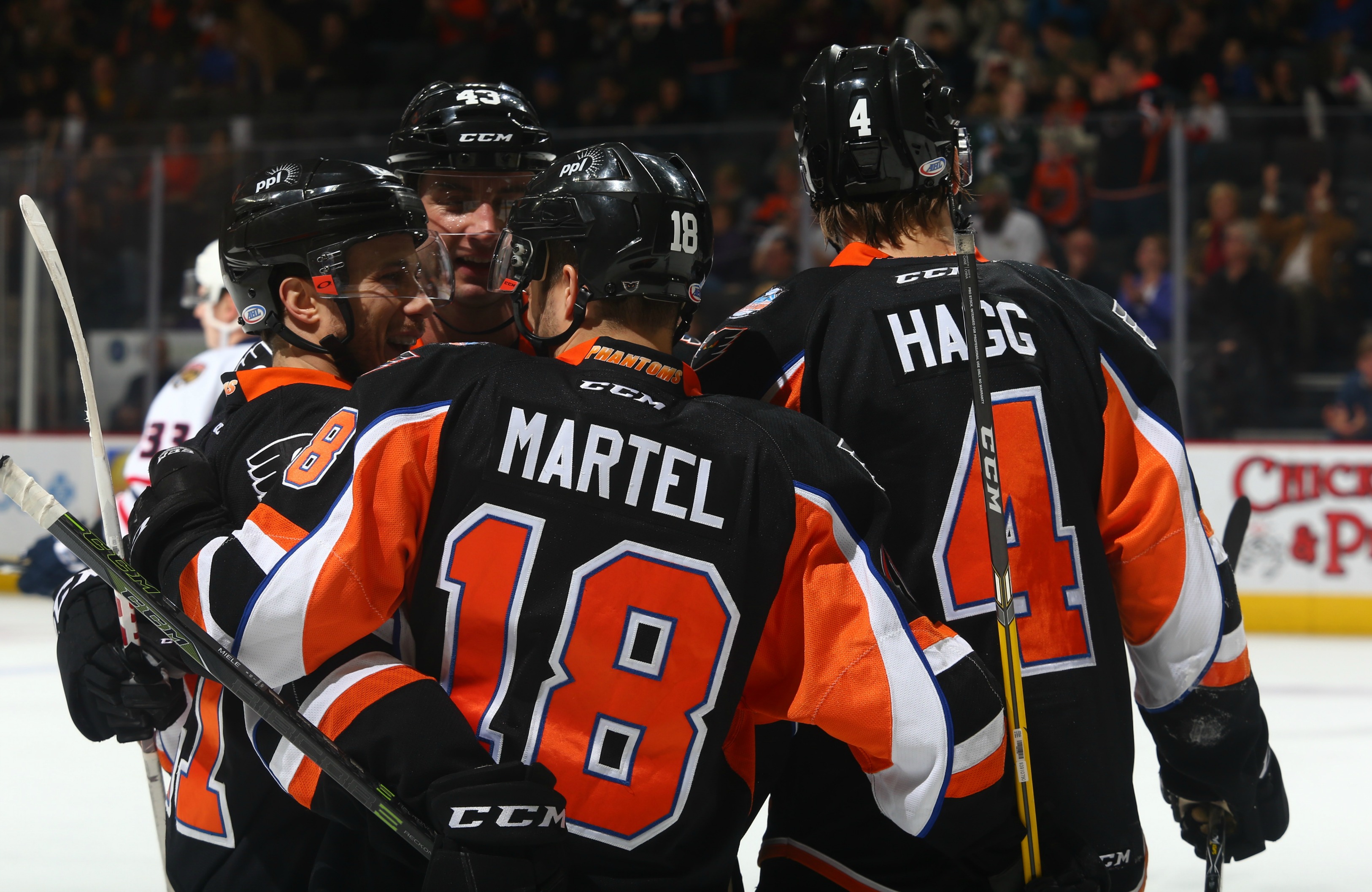 Lehigh Valley, PA – The Lehigh Valley Phantoms are on the brink of the 2017 Calder Cup Playoffs after a rousing 4-2 victory Saturday evening over the Springfield Thunderbirds in front of 7,719 fans inside PPL Center. With the win, the Phantoms improved to 45-23-5 overall this season and are now just one standings point away from securing a postseason berth thanks to the Bridgeport Sound Tigers’ 3-0 setback to the Providence Bruins. 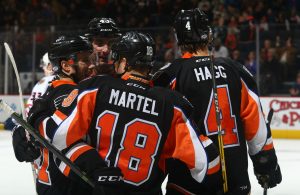 With Saturday’s victory, Lehigh Valley is now tied with Providence with 95 standings points while both clubs are two points clear of the fourth-place Hershey Bears (93 points). Meanwhile, Bridgeport remains at 90 standings points in advance of its showdown with the Hartford Wolf Pack on Sunday. In fact, the Phantoms can officially punch their ticket to the 2017 Calder Cup Playoffs with a Bridgeport loss tomorrow against Hartford.

Goaltender Alex Lyon set a personal season-high with 44 saves Saturday as he improved to 26-14-5 on the year. Lyon’s herculean effort included a sensational 23-save third period in which he turned aside each and every Thunderbirds’ offering in the game’s final frame. 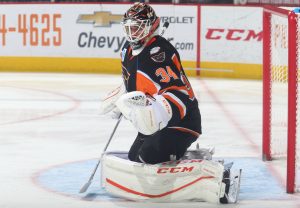 T.J. Brennan (21st), Scott Laughton (17th), Andy Miele (11th) and Corban Knight (10th) provided the offense Saturday in support of Lyon. Miele and Knight’s conversions were part of multi-point outings as they each registered a goal and an assist. Meanwhile, Brennan continues to pace all AHL defenders with 21 total goals. 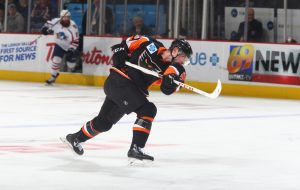 Springfield opened the scoring less than four minutes into the contest when a jammed puck at the side of the Lehigh Valley net popped loose just atop the goal crease where Paul Thompson was able to convert his team-leading 17th goal of the season. Matt Buckles and Jared McCann assisted on the even-strength strike tallied 3:54 into the first period.

The Phantoms relentlessly pressured the Thunderbirds’ zone thereafter though and leveled the game with just under six minutes remaining in the opening frame when an altered puck at the left side of the goal landed on the stick of Knight who made no mistake in sending home his 10th goal of the season. Cole Bardreau and Mark Alt assisted on the equalizing marker netted 14:03 into the first frame.

Lehigh Valley then grabbed its first lead of the night late in the opening period when, while on the power play, Brennan unleashed a rocket of a slap shot from the right point that sizzled past Springfield netminder Adam Wilcox and into the back of the Thunderbirds’ cage. Miele and Knight assisted on the man-advantage marker notched 17:18 into the opening period.

Springfield responded early in the second period period though and evened the contest just 34 seconds into the middle stanza when Chase Balisy converted his 16th marker of the year from just atop the Lehigh Valley goal crease. Dryden Hunt and Jayce Hawryluk collected assists on the even-strength game-tying tally.

The Phantoms remained resilient though and regained the edge in the game just prior to the midway point of the second period when a brilliant cross-ice saucer pass by Danick Martel connected with a cruising Miele on the right wing who promptly blasted home his 11th goal of the season. Chris Conner grabbed the secondary assist on the five-on-five conversion netted 9:50 into the second period.

Lehigh Valley then added an insurance marker with the final dent on the score sheet just over 11 minutes into the third period when a tremendous setup from the high slot by Travis Sanheim produced an open-net opportunity for Laughton who quickly converted his 17th goal of the year. Robert Hagg, who appeared in his 200th career AHL game on Saturday, collected the second assist on the five-on-five conversion.

The Phantoms are back in action this Wednesday, April 12 when the team invades Mohegan Sun Arena in Wilkes-Barre/Scranton for one final regular season showdown with the Penguins.